Does anyone want to write in this style? I want this feel but I'm not there yet. Anyone else in this boat? I'd like to compare notes to get closer to my end goal. Anyone out there?

Moderator
What exactly is it you'd like to imitate? Your second sentence is a bit different from the first. The feeling you get from reading his books is your own reaction. Style is something on the author side. Or is it the world he has built that attracts you?

I'm not a big fan of Sanderson. He writes well enough, I just never connected with his characters. It was one of his metal novels; can't remember which one.

Yeah, need more info. Sanderson’s “style” is more about magic systems than his writing. He is more concrete than abstract, or in other words, less flowery. But I’ve never tried to sound like anyone, not sure how to even go about that... except to write your books while reading their’s, and if you are a natural mimic, it’ll start happening.

Demesnedenoir said:
He is more concrete than abstract, or in other words, less flowery.
Click to expand...

I think Sanderson has specifically said that he's always aiming for the "invisible author" narrative voice. Maybe he used the metaphor of the transparent window; I can't remember. It's not his invention of course, but a general style.

But I'm not sure that's what Rkcapps meant, so I'd need more info. How you handle character voices, pacing, plot points and subplots, the word choice, magic system...yeah, all that stuff might be in the mix.

I'd say Sanderson's style differs depending on the series. I consider his writing in the Mistborn Series to be clean concise and quite careful. I think in The Stormlight Archive, so far, he's been a bit more colourful, a bit warmer, much more descriptive.

I think the one thing a lot of people gravitate towards Sanderson for is how consistent his work is, in terms of quality and story continuity. So I think most are more impressed with his world building and clever plot links than style.

Excerpt, when talking about editors:


[Brandon] My editor's really good at this. Which is great. Moshe. I'm… I am weakest in this area. I shoot for what I call Orwellian prose. If you read essays by George Orwell, he talks about this idea of prose that is a windowpane through which you can see the story. Prose that does not draw attention to itself. It doesn't mean I don't like beautiful prose. I love beautiful prose. But I have chosen a style for myself that is I'm going to try not to distract you. Except maybe like the first paragraph, I'll occas… Of a scene, I'll occasionally throw one in there. But I want…

[Brandon] You to be able to see through the prose beautifully. Because of that, I do a… I'm just… This is my weakest point. I'll often have pet words that I'll use over and over again. I will use sometimes the wrong word, like… And all of this stuff. I have a good editor who catches the unintentional rhymes, the unintentional innuendos that you don't intend…

[Brandon] He will often say things like… I'll be like, "This person was so annoying." He's like, "Do you mean annoying or did you mean aggravating? Because the context sounds like aggravating." I'm like, "Oh. That's… Those are different words. Yes, they mean different things."

[Laughter]​
I think I've encountered the term serviceable in critiques of Sanderson's writing...Weird thing is that maybe he aims for serviceable, heh, because his primary focus is on world building, magic systems, and the concrete events happening in the story.

I feel I ought to be able to add my own observations, but I've only read the first three Mistborn novels, and that was a long time ago. I have another couple novels written by Sanderson, a novella, and a collection of stories from the W.E. podcasters but have never cracked those open. Someday, I keep telling myself. Someday.
Last edited: Oct 1, 2017

I hear what you're all saying, I think that's the trick "looking through a windowpane " and having defined magic systems. I like what those elements create. Ultimately the writing will be my own, really. I think I was just having a usual writer's desperation moment yesterday but I've solved (hopefully) one of my main issues last night... something my husband said about our kids... sparked the idea for a magic system. Been trying to brainstorm for months and it just came to me. Now to write it into the story!

As an aside, I found on YouTube (can't post a link, sorry, ever since I downloaded the YouTube app - I could before that damned app) Brandon Sanderson teaching University students. Recordings are as long as 1:24 etc, so you need time to watch. His worldbuilding class is particularly useful for beginners to drawing maps. Really gives food for thought in every class he does (that I've seen so far).

Yeah, Sanderson’s BYU lectures are full of solid basics. I like Sanderson’s outreach to writers more than his writing and stories, LOL. He seems like a genuinely good and approachable guy with a level head.

I find it kind of amazing just how busy his book project schedule is! 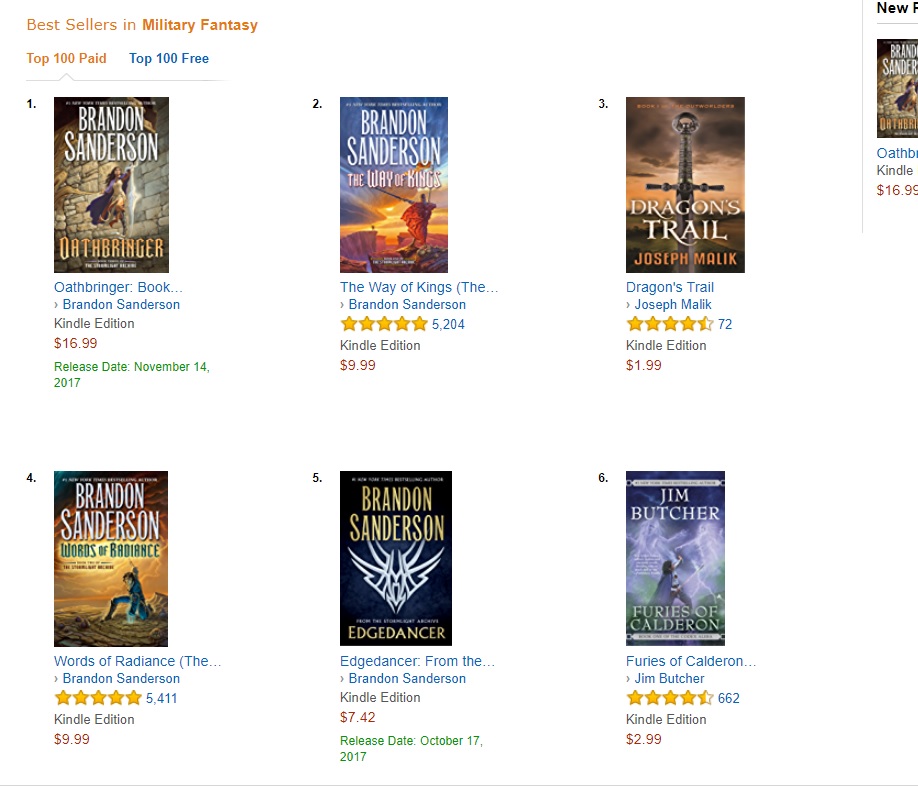 I just bought the Jim Butcher book for my son. He loves Pokemon! Good going Malik, your among prestigious company
You must log in or register to reply here.