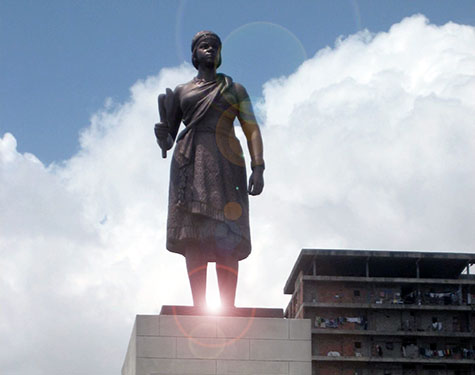 We welcome you again to the world of speculative fiction, where there are no limits for what an individual can accomplish­—except in the mind of the writer. Often, while we can create entire worlds out of our imaginations, stories of adventure and daring do have been limited to male characters, based on the belief that women in Earth’s history did not live adventurous or public lives.

In this series, we would like to counter that notion with examples of women who did just that, lived lives of excitement and public importance. We hope that the lives of these women inspire you to reach beyond the common narrative and to give voices to extraordinary women in your own stories.

Nzinga Mbande was the daughter of Ngola (King) Kia Samba of the Mbundu people in the African kingdom of Ndongo, in modern day Angola. Her father had allowed Portugal to establish a settlement at Luanda in exchange for military aid against Ndongo’s enemies. The Portuguese, who were falling behind other European nations in the slave trade, were moving their slaving activities to the Congo and the southern parts of West Africa.

When Nzinga’s father died, he was succeeded by his illegitimate son, Mbandi. Nzinga, who had been raised at her father’s side in both political and military affairs, was forced to flee Ndongo because she was considered Mbandi’s rival for their father’s throne.

In 1608, the Portuguese governor at Luanda began demanding that Mbandi deliver slaves to the Portuguese as a tribute, a common practice Portugal employed against African kingdoms they felt had been conquered or considered vassal-states to Portugal. In 1618, Mbandi rebelled against the Portuguese and was defeated and imprisoned. He recalled Nzinga from exile to negotiate with the Portuguese for Ndongo’s independence.

Nzinga met with João Correia de Sousa, the Portuguese governor of Luanda, in 1622 to negotiate a peace treaty, even converting to Christianity and taking the name Dona Anna de Sousa to strengthen her negotiating position. One of the sticking points of this negotiation was whether Ndongo had surrendered to Portugal during Mbandi’s revolt and so would have vassal status and be required to continue supplying slaves as tribute. To underscore this point, Nzinga was not provided with a chair during the negotiations, but only given a floor mat fit for servants. Nzinga, unwilling to stomach the insult, ordered one of her own servants down onto all fours and sat on the girl throughout the negotiations. This proud and resourceful young noble caught the imagination and respect of the Portuguese and, in later fanciful retellings about the meeting, she is reported to have slit the throat of the servant at the conclusion of the negotiations, saying, “The Queen of Ndongo does not use the same chair twice.” 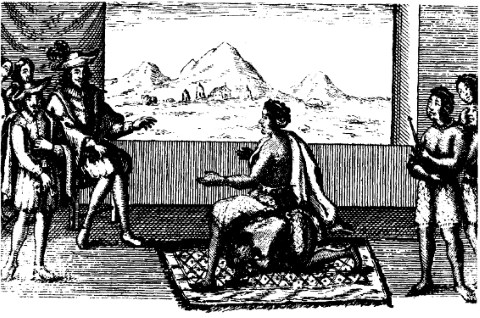 The negotiations ended successfully for Nzinga and Portugal agreed to her terms. Her brother, Mbandi was released, but fearing that he would never regain the lands that were lost during his revolt, he committed suicide. Nzinga served as regent for Mbandi’s young son, Kaza. However, the Portuguese never honored the treaty of 1622 and began to spread rumors to undermine the legitimacy of Nzinga’s rule, saying that she had murdered her brother and his son to gain the throne.

Helped by a political rival of Nzinga, the Portuguese defeated her forces and she fled to Matamba (also in modern day Angola). Nzinga’s sister, Kifunji, was set up as a puppet ruler and forced to officially acknowledge vassal status and pay tribute in slaves for the Portuguese slave trade. Nzinga accepted refugees of the slave trade in Matamba and seized the crown of Matamba in the 1630s when the current queen died.

Portugal was not the only European power vying for control in Africa and in 1641, the Dutch seized Luanda. Nzinga formed an alliance with the Dutch and moved her capital to Kavanga in northern Ndongo. Nzinga and the Portuguese traded victories from 1644 to 1648 but new reinforcements from Brazil forced Nzinga to retreat to Matamba where she continued to lead troops against the Portuguese until 1657 when she signed a peace treaty with Portugal and converted to Christianity again.

Nzinga spent her last years fending off plots to overthrow her government, rebuilding her war-torn country, and resettling former slaves. She died in 1663 at the age of 80. 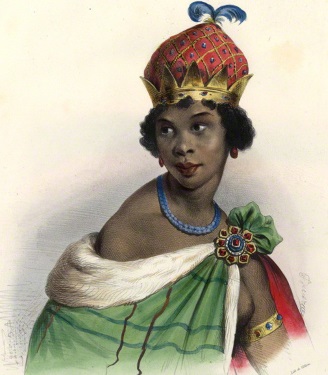 Nzinga Mbande is sometimes called the Mother of Angola. Despite many smear tactics used by her rivals, including rumors that she ate the hearts of her enemies or drank the blood of decapitated slaves before each battle and that she had a 60-man harem who were forced to fight to the death to come to her bed only to be executed in the morning, she is remembered lovingly by the people of Angola as a symbol of the fight against oppression. It is not the salacious legends, but her political, diplomatic, and military brilliance and her role in defending self-determination and the cultural identity of the Mbundu people, that is celebrated today.

Nzinga Mbande was a lifelong freedom fighter who harried the Portuguese for so many years that they signed and honored peace accords rather than continue to try to outfox this brilliant queen. Imagine the kind of character such a woman could make in a fantasy novel—a warrior queen, a savvy negotiator, a woman so fierce, proud, and brilliant that she inspired her enemies to create terrifying legends to try to discredit her, only to have her persist and ultimately meet them on equal footing.

Many epic fantasies follow the lives of political figures fighting to keep their lands free from attack and colonization from powerful foes. What are some of your favorite political epic fantasies? Do they feature male or female protagonists? Why do you think the author chose that gender for their protagonist? Would the story be as compelling with a protagonist of another gender? 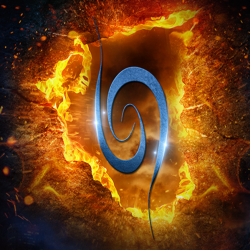 Sorry, I blanked out at the mention that in order to gain respect she slit some servant’s throat. It always seems women feel they have to act worse than men in order to hold on to power, never better.

Most likely, she actually did not slit her servant’s throat. It was probably a story made up by the Portuguese to make her look more terrible than she was. It does make for a great story, though, and an excellent point in how far women often need to go to gain the same respect as their male counterparts.

Both of these stories are truly amazing and for very different reasons.

The ancient warrior was given a prestigious Viking burial, complete with deadly Viking weapons, a bag of gaming pieces (possibly to represent military command) and two horses, one bridled for riding. This mighty warrior — long thought to be be a man — made headlines in 2017 when researchers in Sweden announced that the individual was, in fact, a woman