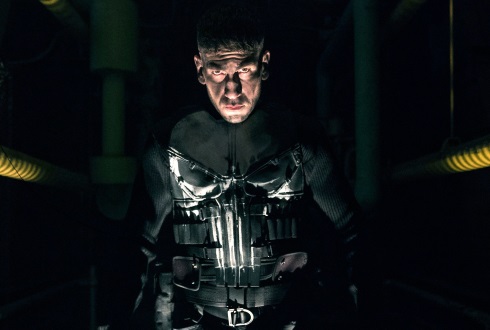 I’m a fan of grit. Stories that occupy the space between dark and light call to me. It is here that we find failure, redemption, struggle and pain. It is here that the bright spots float in a vacuum, and are that much brighter for it.

The Punisher is my kind of character. Since his debut In Daredevil I knew Marvel had a character that, if written correctly, could offer emotional payoff to anyone who enjoys sacrificing their hearts on an altar of pain.

The Punisher is good. A few things in it are excellent, a few things are distracting, but the entirety of it is enjoyable and worthy for any writer to use as a learning tool. I’ll do my best to dissect the Punisher and share my experience with you without completely spoiling the story. But be forewarned, I cannot avoid spoiling a few things.

The Punisher does something so well, the entire story rides its momentum; empathy. Yes, Frank Castle is a killer. Yes, his past is checkered. Yes, his deflecting of accountability is reprehensible. But all of this is forgiven because we see his love for his wife and family. We see snippets of his internal conflict between leaving his family of marines for his domestic family. In the end, he chose his domestic family over his brothers in the military. He gave up half of himself for his wife and children, and that is when he loses them. There are times when Frank Castle’s tenderness, his need for emotional support and human contact, bleeds past his hard exterior. Every time he reaches out to another, to take the first step to move on, the memory of what he is fighting for looms over his shoulder as a reminder. When such scenes occur, we are touched by the self-inflicted torture and moved by a love so strong it doesn’t have room for any other. We want the same. We understand what we would give up for a moment of such love.

But love isn’t the only aspect of Frank Castle we admire. As a marine he was asked to perform questionable actions. I say questionable not because the morality was ambiguous—he himself admits they were dirty acts—but because of the trap of expectation and repercussion. To a lesser extent, we have all encountered the same. Sales people must meet numbers to appease their bosses. Customer service representatives must deny accommodations to save the company’s bottom line. Food preparers may have to use older components to reduce waste. These examples are what strikes true with Frank’s situation. He must do as asked or else he is reprimanded. While most of us can lose our jobs, he could face prison time and a damaged reputation. He serves the government. The show highlights numerous examples of what they are willing to do to achieve an objective. Frank Castle is just an everyday man trying to survive.

Frank’s failure to do what is right rather than what is asked shapes his actions in the show. He is now a man of rigid principle. The few compromises he allows require herculean efforts from Micro, his sidekick. The similarity between Frank’s pains and our everyday pains are clear: we close up to others for fear of enduring more pain. Only someone trusted, and patient can free us from our own prisons. It helps that Micro is everything Frank isn’t, has everything Frank doesn’t, and saving Micro’s family may alleviate some of the burden that drags in Frank’s wake.

With empathy established, we like the Punisher because we understand his motives. They’re pure, clear and simple. The brief flashbacks to his last few days with his wife reinforce what we want to believe. Frank Castle loved his family. The people who took them from him are the same people we would turn to for protection. Since they can’t be trusted, the Punisher must step in and balance the scales of justice. No courts will do. His targets can manipulate the courts. The criminals are deserving of death and he will deliver it.

There is a subplot crucial to the major plot. Without it, Frank Castle isn’t brought back to public awareness. The subplot also humanizes the Punisher, makes him more than just a killing machine. The writers of the Punisher weave this subplot in early. By the time Chekov’s gun is used, we take the development in stride and accept the turn of events that shape the actions of Frank Castle. When the subplot was first revealed, I wondered why the writers decided to slow down the pace of the story. By the time they revealed Chekov’s gun, I was glad they did.

The writers clearly considered character development. Not only do we see Frank Castle evolve from the Punisher of the Daredevil series to something more dynamic, the secondary characters and antagonists also evolved. I place character development in the good category because not every character served as more than a set piece or a source of motive. Where some were side characters from other series with little screen time, there were two female characters that received a significant portion of screen time to only end up surviving as motive or plot devices. Consider every character. Secondary and primary characters should change in the story in some way.

I love action. I love the paradoxical nature of the human body; at once frail and tough. But even I rolled my eyes whenever a gun fight happened in the Punisher. Frank Castle faced off against seasoned warriors with high powered assault rifles. There were only ever two results: a wound to the shoulder that he could still use to amazing capacity, or they impacted his bulletproof vest. Alright. I know the probability of a shoulder sustaining a wound is present, but the number of wounds he received to one shoulder should have left that thing a shredded mass of bone, flesh and scar tissue. There are other wounds to suffer, other parts of the body, and other kinds of damage. I’d suggest the writers consider reducing the source of damage from projectiles to shrapnel, burn, blunt and fatigue. The body is tough, but not that tough.

And the body armor the Punisher wore was unbelievable. I’m not militarily trained, but from what I’ve gathered, bullets from assault rifles do more than just embed themselves in vests. They fracture ribs, bruise bodies, and can even pierce body armor. Whatever the Punisher wore not only absorbed the damage, but it drew all the bullets aimed at him to the chest. Except for whenever the writers thought to show Frank’s humanity and damaged that one shoulder, the vest proved as potent as Wonder Woman’s bracers.

Which brings me to my next gripe. Frank Castle isn’t Wolverine. He doesn’t have a healing factor that can bring him back from mortal wounds. Well, the writers appeared to have forgotten this. Frank Castle bounces back from encounters in a few days that would leave people crippled. Frank must represent the everyday man. We want to see ourselves in him. I don’t understand why the writers sped his healing ability. Except for a rare ultimatum, Frank Castle and his sidekick were never pressed for time.

Character agency, the ability of a character to react to a stimulus or need, wasn’t divided equally when the writers sat down to plot the story of the Punisher. The most glaring example is David “Micro” Lieberman, the Punisher’s ally and sidekick. David is a savvy NSA analyst who has no problem hacking into everything from government servers to bank accounts. He can do it all and is never caught. The writers made him someone with a unique understanding of computer technology. No one can trace him, identity him, or, dare I say, hack him. This drew down the tension. Whenever David tapped away at his keyboard I knew he would succeed. Whenever the audience is ahead of the story, you lose them. Make a habit of this, then they’ll wonder why they’re devoting their time to the story at all.

My final gripe is the too-clean ending. The Punisher isn’t supposed to be accepted by society. He walks on the wrong side of justice. His violence is abhorrent in that a mistake in judgement cannot be undone. So why is it that some of the people who indirectly assisted in obstructing or attempted to kill Frank Castle suddenly make nice with him? Why is he legitimized? I liked how the Punisher ended in the Daredevil. He was still a fugitive. People debated whether he was good for the community or no better than a villain himself. He walked the gray space between right and wrong. Not so in the Punisher. By the end you’re left scratching your head. Did Frank Castle abandon the Punisher? Do the people in authority no longer find him a threat?

For all its flaws, the Punisher is a great series. The good outweighs the bad. I rooted for Frank Castle to get his vengeance, while I choked up on his love for his wife. I know some may find the dead wife a gimmick, the “Lost Lenore,” but the frequent flashbacks made her a character, something more than the source of his anger. I would recommend anyone who can handle a couple buckets of stage blood to watch the Punisher.

Which type of hero do you prefer? The “achievable” heroes like the Punisher and Batman, or the super heroes like Superman and Wonder Woman?

What are your thoughts on the quality of story in superhero media?

What are the shortcomings in writing a superhero story?