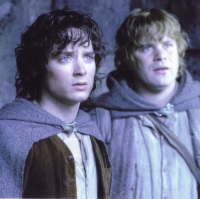 It’s possible to build characters who achieve a secondary reality, and become people who live in their own right in our hearts and minds.

It jars me every time someone says Frodo Baggins and Sam Gamgee are ‘characters.’ I want to shout, “They are not characters! They are people!”

J. R. R. Tolkien’s masterful essay “On Fairy-Stories” is must reading for anyone who wishes to practice, as he calls it, the “elvish craft” of sub-creating secondary worlds that achieve a reality of their own. I wish to add some thoughts from my own travels in Middle-earth and a galaxy far, far away, that I hope will help you to build ‘characters’ who are truly more than that.

1. Show inner conflict within your heroes and villains.

Sméagol was a prisoner of the Ring and Gollum for centuries, yet a small, tormented part of his true self remains that Frodo can reach. Frodo also suffers from the Ring and must battle unceasingly against it. All the heroes in Middle-earth struggle against fear and uncertainty.

Anakin Skywalker is tormented by the death of his mother and later becomes Darth Vader. Near the end of his life, the inner conflict between who he had been and who he became is clear.

Interview your characters before you start your tale. Unless you write of them from conception to death, they had lives before you met them and live still beyond the end of your story. Let them tell you what turmoil is in them. They have given you a sacred trust by letting you in on their innermost secrets. Do not abuse this. Let them guide you to a great story.

2. No hero is perfect; no villain is totally evil.

For your heroes to move beyond being mere characters, and to become people who live in their own right, they need to have flaws among their sterling qualities. Boromir is a noble man who falls to the lure of the Ring. Sam’s heart is not open to Sméagol’s efforts to return to the light. Gandalf, Elrond, and Faramir want nothing to do with the Ring because they know they would fall to its power.

Your villains must have at least the possibility of redeeming qualities. Gandalf believed in the bit of Sméagol still left in the monstrous Gollum. Luke Skywalker saw his father hidden deep within Vader.

What flaws do your heroes have? What atrophied virtues do your villains possess?

3. Make your heroes inspirational, and even your villains somewhat likable.

There should be one or more attributes within each person that you can identify with, want to become, or can at least sympathize with.

Frodo’s fearful but complete embrace of his calling has inspired many to continue on their own hard journeys. Sam’s unfailing devotion sets a high mark to aim for. The hope of Sam, Aragorn, and Faramir amidst seemingly hopeless situations gives us the courage to hope ourselves.

With Bilbo, we feel sympathy for Sméagol’s wretched state. We share Padmé’s empathy for Anakin’s torment after he returns from his mother’s death. We may love to hate villains, but if the hearts of your readers instead ache for them, you have truly achieved something great.

4. Heroes and villains should not be predictable.

Were you surprised that evil crushes Frodo at the end, and that he cannot destroy the Ring? Or that Gollum inadvertently becomes a hero?

Were you taken aback by Luke’s vicious attack on the father he had come to save? What about Anakin’s return to the good side and his self-sacrificial act to save his son?

From what we have read in other stories, we have come to expect that heroes do not fail and that villains do. Isn’t that the way it should work?

But part of the power of Tolkien’s sub-creation lies in Frodo’s seeming failure, because of how true it is. In reality, even heroes are sometimes overcome by evil, and sometimes the villain becomes a hero. This is also what makes those moments on the Death Star so powerful and moving.

If you keep yourself open to how the story will develop on its own, rather than how you think it should happen, you will be in for a few surprises.

5. Let the story write itself.

Rather than rigidly adhering to a predetermined plot, try just walking alongside your characters as their lives unfold. Let the story tell you what happened, and then just follow along and record it.

I have found this approach to be enjoyable. So have many other authors, including Tolkien. He plotted out where he thought the story would go, but then he discovered that some things turned out quite differently. Strider showed up, but Tolkien had no idea who he was. When Faramir appeared, Tolkien was convinced that he was no invention of his own, but someone who just wandered out of the woods and into his story. He learned to wait for the tale to unfold as it had really taken place, as opposed to what he thought should happen.

If you are blocked or are frustrated with having to constantly wrench a character away from a path he or she clearly wants to take, let go of the reins and instead enjoy the ride down the unforeseen road. Your story will be richer, and your readers will thank you!

Which of these are you are already doing? Which are you going to start doing?

Can you think of some other ways to build stronger characters? If so, please share in the comments below.

Anne Marie Gazzolo is the author of Moments of Grace and Spiritual Warfare in The Lord of the Rings, which includes a chapter on The Hobbit. Sign up for her mailing list at www.annemariegazzolo.com and get a free copy of her ebook about applying to your life the lessons taught by Hobbits, Wizards, Elves, Men, and Dwarves. You can also connect with her on Facebook and Pinterest.

Great thoughts to live by when generating characters.

Thanks, P.H. Glad you enjoyed!

Great post. I think you’re right on the money here, but I especially like your advice about letting the story write itself. I’ve tried to format a plot and stick to a plan, but have found I can’t work that way. I definitely need to have a beginning middle and end and make sure everything moves the story in the right direction, but other than that I let the plot unfurl as it will. It’s great fun to start typing and see what happens. Characters surprise me with their brilliant ideas, or fatal flaws, and I never know what’s going to happen next. Thanks again for all your great suggestions.

Thanks so much! Glad to find another kindred spirit here. 🙂 I am already on the sixth edition of my own fantasy, and I’m only down a few chapters. It keeps morphing as I discover new stuff. I know it will settle down eventually after I discover what really happened.

It turns me on whenever my hero has an inner darker demon dwelling inside him. It’s a pity that our hero is always at his best fighting capability whenever darkness dominates his consciousness. Perhaps being able to consciously exploit his darkness shall be a twist ~

A perfect hero would be no fun, but one with failures and weaknesses that he sometimes falls to but struggles to overcome is more interesting for sure. Thanks for reading!

I’ve always been fascinated with the idea of letting the story write itself! I have heard of authors doing this, but don’t know if I could ever let that happen in my own stories. Great advice about building stronger characters.

Thanks! You may want to try it one day. I am finding out fascinating things about the fantasy I am writing just by letting it come out as it should rather than me steering it.

This was excellent.
I very much agree with tip 5.
I write a summary of what is supposed to happen then I start at the begining and let my character tell me what actually happens. I sometimes start a scene thinking it will unfold a certain way but it doesn’t. My characters can tell the story better than I can… after all, they were there.

Exactly, Jim! Love what you said at the end about “My characters can tell the story better than I can… after all, they were there.” Indeed. Glad you enjoyed the piece. 🙂

Hi Anne Marie
Great post, thanks.
I think the key is empathy. For number three you mentioned needing villains that are somewhat likeable. I think a great villain is one you hate, but can understand, to some degree. It’s the empathy for what they’ve been through or are going through that draws the reader in. Your examples were perfect. Although I’m not a huge fan of the new Star Wars, I do think Lucas did a good job of taking Darth Vader and giving him a back story that created real empathy in the viewer.
cheers
Mike

Thanks, Mike! Glad you enjoyed the article so much.:) Have you read the Expanded Universe Star Wars novels? I gave up after I moved to the Shire 10 years ago, but I loved also the character arc of Mara Jade. She rocked! 🙂

Thx for the primer, sharing with others.

Thanks for stopping by to read, P.H. 🙂

I’m a big fan of combining disparate elements in order to create characters with vivid contrast.

For example, having a rules-oriented lawman who struggles with his own reckless, adulterous desires (Seth Bullock in Deadwood). Or portraying a shotgun-wielding stick-up man who has a strong sense of morality, and helps the less fortunate in his community (Omar Little in The Wire). A more recent example is a family-oriented chemistry teacher who lives a secret life as a drug kingpin (Walter White in Breaking Bad).