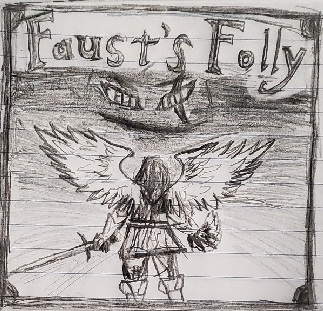 Look I made a doodle for the cover image on here!

A long term writing project that I have been constructing for the better part of 10 years. This is draft 4.50.1a (that's a joke, its the 4th draft being edited). The purpose of posting here it to get some critique and maybe a few readers that are as invested in my little world as me!

I will be releasing by chapters and working through the material as I have time and receive comments. The end goal is to help me polish for publishing purposes and see how many people care.

Here is a synopsis that I have put together. This is a fantasy novel:


"Under Origin's watchful eye, Faust created mortals of all sorts and sizes. With them she constructed great guardians of harmony, keepers of her will. Combined they comprised the realm of Faustenmire, and Origin decreed it good. However, in their desire for companionship the two progenitors made a mistake. With free will and independent consciousnesses, mortals unwittingly forged a new plane alongside their own. It was a foul place full of their most terrible desires and darkest urges, a place were only nightmares and monsters were stored. To guard this realm, Origin chose her son Yethsoor, Faust's brother, and a balance was struck. The world was happy while darkness festered below it, filling with demons and other monsters.​
Still, an eon passed before a frustrated Yethsoor betrayed his kin and released his demonic hordes. As the monsters laid waste to her creation, Faust challenged Yethsoor, but he slew his sister. This destroyed the harmony and the hope of mortals, and the world fell into true darkness. Horrified by this atrocity, Origin herself was forced to intervene. Out of desperation she killed her son and banished his demons into an Abyssal prison. No the sole ruler of existence, but with her companionship and family destroyed, Origin faded away. Her power waned to nothing as she wallowed in sadness, loss, and guilt. Thus, the dark ages were spawned and horrible fates befell the world for many millennia.

Now, one of the few remaining guardians made by Faust wanders the world, Guinevere Raziel. She seeks to find purpose in a race against an ever-changing world that has abandoned the notion of Origin and the sacredness of magic itself. But, what does Guin run towards; fortune, fame? Or is she running from her past, and all the terrible things that once hunted her in the night?"​
Top