Hello, I'm just curious who else here makes up unique languages, and numerical systems for their race, or races; for example the Ginarian (zhin-are-ian) people of my world they speak a language called Kehntra (keen-truh) and use a base 12 numerical system ( i.e. 1 2 3 4 5 6 7 8 9 A B where A, and B represent 10 and 11).

So if you do, do this just mention maybe one or two of your languages, and there numeric system, and if possible maybe a sentence in it for example in kehntra: vel siha karem minech karemi or in english I am the king of all kings, and if possible also include the IPA (International Phonetic Alphabet) transcription like this [vɛl sɑɪɑ tɑɾɛm mɪnɛx tɑɾmi].

I'll speak for everyone and say, yes. At some point, every worldbuilder tries to come-up with a language. It's just part of the fantasy writer's development.

I made a language that is a collection of whistles, clicks and other vocalization including vibrating your lips and sucking air through your teeth. I can't spell any of it out. In the story I wrote, it was described what it sounded like, not transcribed as spoken.

I got an Elven language in which "I am the king of kings" would be something like "jam o'kins duh keen". It's supposed to be an Elven form of Creole (with a dash of French grammar) rather than a full language. It would sound horribly awkward and off if you don't speak it with the right accent.

I haven't made up any languages for my WIP, but I once made a pictographic language (I was like 11, but I still have the papers I wrote it on) and I've played around with making written languages. I got briefly interested in it after studying Spanish in school. But right now I have no interest in it.
S

I might try, for a few of my races to create a language, but I'm not expecting it. (really hard to do when you have 12 races.) So everyone speaks standard (How convenient!), or if they do speak their own language, I say they said something in a different tongue, and that my MC didn't understand it or something like that.

Moderator
I don't use a made up language yet, but I do have to contend with Latin. Altearth is a place where the Roman Empire never fell. I drop Latin in occasionally and not always in the form of words actually used. For example, I might have a Roman bemoan the accent of a barbarian.

Deciding what words to use, and when, and most importantly why, is an on-going challenge. I suspect it will be the same for any conlang.

I've dabbled. I'm fine with vocabulary, but grammar rules are a bigger challenge. I have several languages in various levels of development.

My (AE)lfar language (A and E should be conjoined but I don't know how to type that) is based on Proto-Indo-European, Old Norse and Old Celtic. It has a base 5 mathematical system and a limited sign language form. My Mer language of the sea people and the Mar language of the deformed underworld AElfar are offshoots of it.

The AElfar have created a written form of the mostly pictorial, sound effects, scent language of the sentient trees.

I haven't gotten very far with my Dvar language beyond limited vocabulary. My Erk or extinct Mor/(Giant) languages are largely untouched, but I'm not sure how much if any of those I'll need.

I have a Faerie conlang although I'm not using it anymore. It's fairly robust.

I may one day do a novella telling an abridged version of the series from the Faerie perspective -- their around-the-campfire song about it -- written entirely in the conlang. And then I'd never release the key, which is hand-written and about a hundred pages long. Just let the really hardcore language nerds figure it out. That would be a kick in the ass.

Character Map is your friend.
S

I'm fond of naming cities and some other stuff in Latin, it adds greatly to the feel of the fantasy and adventure.

Thanks. I ended up copying and pasting from the character map on my last laptop. And used find and replace to put it into the many necessary words.

This laptop doesn't have a number pad either and the character map was buried. I found it with the search box.

Is there a code to use if you lack a number pad?

Moderator
First, are you sure there's not an overlay number pad? Lots of laptops have this. They put the number pad as alternates on the letter keyboard. You usually get to them with the Fn key, so it would be Alt+Fn+nnnn.

If that's not the case, have you tried using the International keyboard? Doing so has a couple of consequences, but it also lets you enter accented characters easily from the keyboard. For example, ^e produces an e with a circumflex.

I looked it up. I can assign a special shortcut key or use the on-screen keyboard, etc. I'll figure out something. Thanks for your help.

Moderator
I was gonna say, then there's macros. Either in-app or externally. At any rate, there are definitely alternatives. Mobile is more difficult, but still possible.

skip.knox said:
>(A and E should be conjoined but I don't know how to type that)

well that's one way of doing it, what I do is use Type IPA phonetic symbols - online keyboard (all languages) which helps a lot

I have made up a few alphabets and numerical systems but it was long ago so I don't remember them and they were so complicated I just ditched the Idea. The story I am writing now though uses the latin language and the greek language and I have different alphabetical systems based off of ancient alphabets, magic alphabets, and angelic alphabets I have come across when I read old grimoires and magic books. The main ones I use are Enochian, Magi, and Theban. (others I use are daggers, angelic, and some runic one I found).
F

I'll be honest: making up your own language always sounded intimidating to me; whenever I look at stuff like LOTRs or Starwars, I always wondered how they were able to stay consistent with the made-up languages. Unless you're taking inspiration from real world languages, dead or not?

I've only gone so far as creating languages for naming, with some verb conjugation and grammar. An entire conlang? I spend way too much time thinking about my world as is, LOL. I'd hire it done.

I do use a duodecimal system for coins and values in one part of the world.

Being that Spanish is my native tongue, what I did was basically take what I want to say, translating it to Spanish and then forming some variation. I researched how to properly develop a language and I have to say it is pretty intimidating to me. So i kind of just compounded everything into this.

Using this i've kind of skated by using something that sounds somewhat organic. Hope this helps!

I've been working on a conlang for my current story, although I'm not trying to develop it completely. I'm just working on words and grammar as needed for the story. I suspect that I'll have enough mapped out by the end of the story for there to be a decent framework for a whole language, but I'm not trying to get so wrapped up in it that I don't actually write the story. Also, I'm not coming up with one for each race. Instead it's basically the ancient language of the continent.

I've also been dabbling with a shortened version of it for a tribe of barbaric people. For example, there's a legendary ruler of this old kingdom called Naghal. This is what the barbaric folk refer to him as, although the original title was Nakhagha-ughal, which means Crown of Filth and Corruption (which, now that I type it out, I realize sounds pretty metal haha).

I was also playing around with the idea for an alien species in a sci-fi setting who uses a base 2 counting system. Ended up developing a whole civilization around it, but have since then tucked it away so that it doesn't distract me from my current project.

Demesnedenoir said:
I've only gone so far as creating languages for naming, with some verb conjugation and grammar. An entire conlang? I spend way too much time thinking about my world as is, LOL. I'd hire it done.
Click to expand...

I have only recently learned that there is a call for conlangers in Hollywood. Who knew?

Mine ended up about 100 hand-written pages, plus about half of a legal pad full of notes. Seriously contemplating selling it to the right bidder. 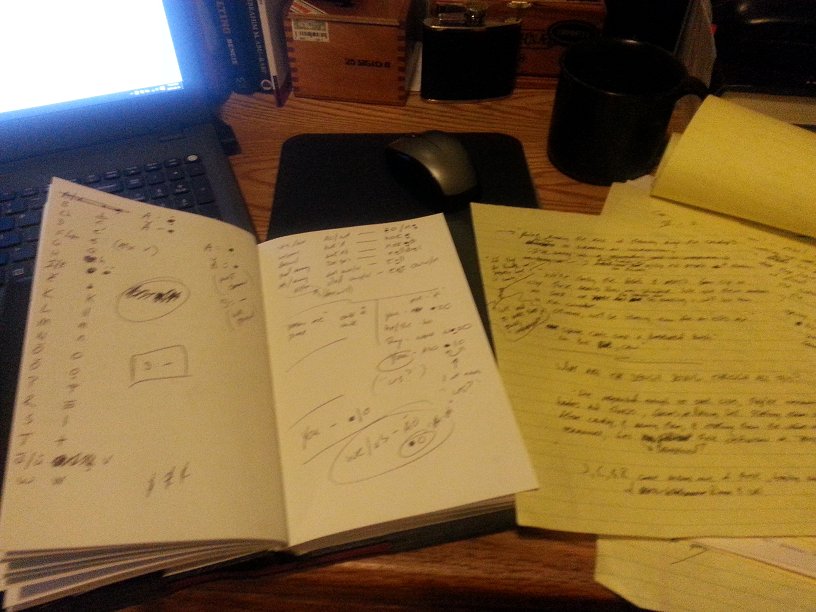 You must log in or register to reply here.

I need help with a unique spin on the whole "possession" concept...

A
I'm trying to think of unique races for something I'm working on, any ideas?