This article is part 2 of a series on Fantasy Fortifications by Toni Šušnjar. 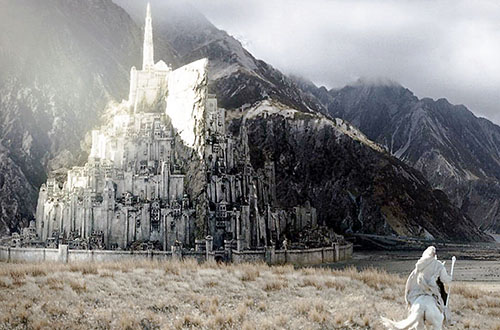 This section, being technical, depends a lot on the nature of the fantasy in question. Is it low or high fantasy? How widespread is magic? Are there any fantastical/magical materials present? Can magic be used to reinforce buildings. Good examples of magical-yet-not-obviously-so fortifications are Helm’s Deep (Aglarond) and Minas Tirith from Lord of the Rings. Both Aglarond fortress and main wall of Minas Tirith had been built using magic – yet that magic takes the form of really advanced technology, and provides obviously fantastical fortifications without obviously breaking any laws of physics (Angrenost/Orthanc and Barad-dur are more obviously fantastical).

When it comes to materials however, another factor is their presence or absence. Where there is stone available, crude stone fortifications may appear long before they are technically necessary. Where there is none, fortifications will be built out of other materials – brick, or wood and earth – long after stone fortifications had appeared elsewhere, unless significant logistical capacity exists for getting building materials from afar. This logistical capacity is always connected to waterways: an ox cart, transporting 1 500 kg of stone, cannot cover more than 15 kilometers per day.

Lastly, question is also one of timespan. Stone and brick fortifications take a long time to build, and are expected to last. Earth-and-wood fort however can be built very quickly, and due to nature of materials requires frequent maintenance. Because of this, any temporary fortifications will utilize either wood, earth or both.

Wood and earth are the most and accessible building materials for fortifications. Even if there are no trees around, there will be earth. Most fortifications in Western Europe from VI to X century were built from wood and earth.

If there are no siege weapons at all, pallisade and/or earthen rampart with ditch are usually enough. The only threat in such a scenario are ropes and ladders, which can be defended against relatively easily as long as defenders can actually utilize height advantage provided by the wall.

Siege weapons change design significantly. Depending on the nature of the same, pallisade may be abandoned or slightly reinforced by earthworks (it has to be thin enough to lean over). Earth rampart will be significantly reinforced, in order to withstand projectile strikes. If gunpowder siege weapons (e.g. cannons) are present in great quantity, fortifications will consist of massive earthen ramparts in order to absorb projectile strikes, while face (the part of fortification we see) may be covered in grass, wood or stone.

Earth and wood are the first and most primitive materials for building fortifications (though unshaped stone is not much younger, necessarily), and are thus a good choice for basic fortifications. However, wood is also utilized for many other purposes – even a small house already requires 12 centennial oaks. Fort Trelleberg in Sweden required 800 000 square meters of forrest. By 12th century, forrests of Europe were already significantly depleted.

Stone is used for more advanced fortifications. Early stone fortifications were crude dry walls, with rough pieces of stone placed on each other. As techniques developed, so did wall design. First the stone pieces were shaped into regular blocks. Later walls had two structural walls made of stone blocks, with space between them filled with rubble. This rubble helped absorb projectile strikes, thus reducing damage to the wall. Some such walls could be 8 to 10 meters thick.

Such walls could be dry as well, but also could be reinforced in several ways. Romans in some of their constructions – e.g. Diocletian’s Palace in Split – drilled holes in stones and connected them with iron or lead rods. In other cases, limestone mortar was used to connect stones, and sometimes was also poured to connect the rubble between the structural walls. Usage of mortar significantly improved wall’s ability to resist impacts, as Roman mortar was flexible and compressible enough to absorb and dissipate some of the shock of the impact.

Brick was also used in fortifications where stone was not available – for example, Aurelian walls of Rome were built from brick. Brick is much less resillient than stone, however, so such walls were easier to damage and less resistant to elements. Brick becomes more popular during and after XV century, as it is more resistant to cannon fire than stones are.

As already noted, fantasy can afford to be more fantastical in its choice of building materials. Fortifications could be literally raised or grown out of ground, shaped from lava or molten rock and so on. For more traditional approaches, however, it is necessary to keep the above factors in mind – especially the presence of building materials, as that will determine what a fort is built of, even as its shape is decided by the weapons which could be utilized to assault it.

What Do You Say?

What are some of the traditional materials and techniques for building fortifications in your world?