This article is part 4 of a series on Fantasy Fortifications by Toni Šušnjar. 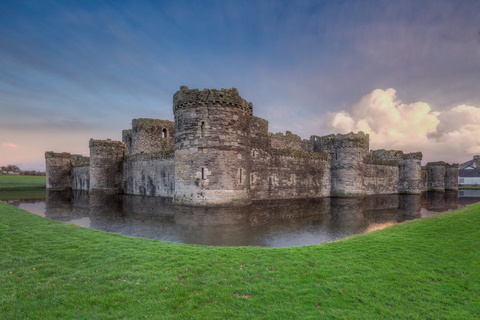 Build time of a castle, depending on design and available funds, may last from half a year to half a century. It also depends on the situation before the building: a ruined castle is a half-built castle after all, and rennovating (and/or updating) walls is much cheaper than building new ones. This can be seen with city of Dubrovnik, where (massive) medieval fortifications were, after the fall of Constantinople in 1453., reinforced with outer line of walls to reinforce them against cannon fire.

Both build time and extent of fortifications depend on material (financial, logistical, humane) capacities of the builder, as well as the perceived need. Many castles were never finished for lack of resources.

Builders are professionals; peasants, soldiers and other amateurs were used for muscle work only. This means that they have to be paid, and many in fact travel from a building place to a building place. Beaumaris Castle in England required 400 masons and 1,000 assistants to be built in a nearly record time (from 1278 to 1280).

Motte and bailey castle is the earliest and simplest type of a castle. It consists of a mount of earth with a palisade or wall on top. Motte itself is the mound, while bailey is a flattened area beside the mount – a courtyard of sorts – where buildings were built. Motte could be surrounded by a ditch. The keep was built atop motte. With time, many such castles “graduated” from a wooden palisade to stone walls. However, they were necessarily small, as building a large motte is disproportionately difficult, and as stone walls became more common motte faded out of favour. One advantage was that they took only weeks to build.

Shell keep is an evolution of motte and bailey design. It is thin, round, stone-built defensive enclosure. Stone wall replaced the original wooden wall of motte keep, containing the wooden buildings within. Most often only the keep at the top of the motte was remade in stone, and thus such castles are small in size – 20-25 meters in diameter. Walls were thin and light, so as to avoid the mound collapsing. They were built between early 1100s and 1210s.

Stone castles were contemporaries of shell keeps, first – the Tower of London – being built in 1070s. By time of William the Conqueror’s death, 86 had been built. But while shell keeps were an evolutionary dead end, stone castles continued growing ever more powerful and elaborate until – and even after – the appearance of gunpowder weapons. Stone allowed castles to be much larger, as well as much more resilient to attacks, and – just as importantly – to elements. Stone fortifications, including castles, can last for centuries with little to no maintenance. They are also much easier to keep warm in winter, and could be taller than most siege engines attackers could bring to bear (although siege towers of antiquity could have been 30 meters tall, such examples were rare in Middle Ages).

These were often of the concentric type, with keep being surrounded by a curtain wall. Domestic buildings such as halls, quarters, butteries etc. would be included on the bailey, surrounded by the curtain wall. Curtain wall could be thicker than 1,5 meters and solid all the way through.

Such castles were extremely expensive, time-consuming to build (5-10 years), expensive to maintain, cold and leaky, and could quickly become vulnerable to attack, such as rectangular keep being vulnerable to undermining the corners. Just refurbishing Dover castle took up a third of Henry II’s annual income.

Concentric castle is a castle within a castle. It is essentially a stone castle design surrounded by an outer wall. Inner wall is thicker and taller, and is surrounded by a lower outer wall (much like Theodosian walls of Constantinople). First examples were built in mid-1200s, with best examples from 1290s to early 1300s. Before Caerphilly Castle in 1270, the outer wall merely reinforced the inner wall; but since then, the outer wall was an integral part of the defense and was considered separately from the inner wall. Between the fire line, moat, outer wall, courtyard and inner wall, such a castle will have had five obstacles and two separate layers of defences (Constantinople had six obstacles and three layers in Theodosian walls). Symmetrical shape also meant that lookouts had better view of the countryside.

In most cases, the only way for the attackers was to starve the defenders out. Attacker aiming to attack the gates would have to fight through the fire line, moat, outer gatehouse (outer gate, courtyard, inner gate), castle courtyard, and inner gatehouse (outer gate, courtyard, inner gate again). Castle courtyard between the curtain walls was nicknamed the “death area”, as attacking through it meant that attackers were exposed to fire from inner wall, and possibly even the outer wall, if it was not fully taken.

Such castles however were extremely expensive and took years to build. Edward I spent 22 000 ₤ on Caernarforn castle, which was more than royal treasury’s annual income.

Ballista is a heavy framed crossbow-type artillery drawn with a winch. It can release 77 cm bolts with 200 g heads or stones 2,5 – 40 kg in weight at range of 450 meters, though optimal range is 100-170 meters. Largest ballistas can release bolts / darts at beyond 1,100 meters; they are typically used only as siege or defensive weapons. These bolts are capable of penetrating armour plate. Normal ballista can release three bolts a minute; while smaller and weaker, repeating ballista can achieve 11 bolts per minute. Stone-throwing ballista can throw 26,2 kg stone over 400 meters, can be trusted to kill a man at 100 meters; walls have to be 5 meters thick to withstand an impact at 150 meters. Lighter stone-throwing ballistae are often used to de-crenelate the walls, removing cover  for defenders. Super-heavy stonethrowers can throw 75 kg stones; with small projectiles, they can achieve range of 700 meters. Ballistae are typically placed on towers – there will not be room for any artillery on curtain wall – and are used for counterbattery fire. However, their complexity and need for regular maintenance means that they are typically not used by a medieval society. They would only be used if society transitioned from antiquity to middle ages and renaissance without having actual middle ages (that is, collapse and feudalization of society). But this means no feudal lords, presence of large sophisticated states akin to Roman Empire (even if that of 7th – 11th century) and generally world unlike most medieval fantasy.

We have trebuchets that can fling Rolls Royces around!

Ah, but in the Middle Ages they didn't have Rolls Royce. They only had the Dodge Dart (which I've always thought was a solid bit of advice), a couple of Bolts, and a plethora of Cavaliers who could be flung in times of dire need.

I think people may be under-estimating the sheer awesomeness of a trebuchet a little. We have trebuchets that can fling Rolls Royces around!