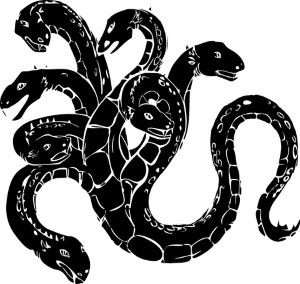 The Hydra is a many-headed creature, fierce and dangerous. If a head is cut off, two more will grow in its place, making it a difficult monster to defeat.

The Hydra story comes from the Labours of Heracles, and, like the Phoenix which I wrote about last time, has gone from being a single individual creature in ancient Greek myth to a species of creature in many modern interpretations.

The Hydra in Myth

Heracles’ defeat of the Hydra is perhaps not the Labour that puts him in the most heroic light. Quite frankly, the story is farcical, and I have my own theories about how it came about in those long ago days of Dark Age Greece.

Though there are mentions of the Hydra from Hesiod (c. 800BCE) onwards, the most complete account can be found in The Library by Pseudo-Apollodorus, written in the first or second century CE.

The Hydra was a water-snake created by the goddess Hera specifically to kill Heracles. It lived near Lerna and terrorised the countryside there. It was huge, big enough to take cattle, and said to have nine heads of which eight were mortal and the last one immortal. King Eurystheus sent Heracles to deal with it. Heracles travelled there by chariot, driven by his nephew Iolaos.

The Hydra was inside its lair, so Heracles drove it out by throwing burning brands at it. He then decided the best way to deal with a giant snake was to grapple it, like a wrestler, which didn’t prove effective as the Hydra twined itself around his legs like a constrictor. So Heracles used his club and gave the Hydra such a thwack on the head that the head came right off. But then the head grew back in duplicate. This didn’t deter Heracles, who continued knocking off heads in spite of mounting evidence that the two-heads-grow-back thing was not a one-off. It seems Heracles wasn’t the smartest of people.

Even though Heracles’ strategy was entirely counter-productive, the goddess Hera decided to give her serpentine champion a bit of help, and summoned a large crab to nip at Heracles’ heels. This idea proved as fruitful as Heracles’ plan to keep knocking off heads. He promptly killed the crab and decided that it was justified to call on Iolaos for help.

Iolaos evidently got his brains from the same side of the family as Heracles did, because his brilliant idea to help out his uncle was to set the woods on fire so he could get a few burning branches and use them to cauterise the neck wounds each time Heracles smacked a head off. This stopped heads from growing back at all, so at least Iolaos’ idea worked, even if it did involve setting the woods on fire.

So with Heracles lopping off heads and Iolaos burning the wounds, they eventually got down to the last head – the immortal head that couldn’t die. Heracles cut it off and buried it under a large rock, and that was that for the Hydra.

It wasn’t the end of the story as far as the Hydra’s involvement was concerned, though. Heracles cut open the Hydra’s body and dipped his arrows in its gall to poison them. He used these arrows as he completed various other heroic deeds and the poison proved effective.

One such arrow was used in the following circumstance: Heracles remarried. His new wife was a young woman called Deianeira. As they were travelling across Greece they came to a wide, shallow river. Heracles could easily wade across, but his young bride needed help. A centaur called Nessos worked on that stretch of river helping people across, and Heracles paid him to carry Deianeira, then strode off ahead and quickly reached the opposite shore.

Half way across the river – presumably on a small island or sandbank, though it’s not mentioned in the accounts – Nessos attempted to rape Deianeira, who screamed out. Heracles instantly fired one of the poisoned arrows at Nessos, fatally injuring the centaur. Before Heracles reached them, Nessos told Deianeira that she could make a love potion with the blood from his poisoned wound and his semen, which should be applied to Heracles’ clothing, and which would mean he would never look at another woman but Deianeira in love or lust again. So she collected up the tainted blood and semen in a little pot, and later on put it on Heracles’ tunic.

When Heracles put the tunic on, the Hydra poison burned his skin and the tunic stuck to him so he couldn’t take it off. He couldn’t cure himself or wash the poison off, and knew he would soon die. When Deianeira realised what she’d done and that Nessos had lied to her, she hanged herself. Heracles built himself a pyre and had someone light it on fire and he was taken up to Mount Olympus, the home of the gods, and became immortal.

So in the end the Hydra did kill Heracles, as the goddess Hera had intended, though in a roundabout way.

The name Hydra means “water-snake”, and ancient writers disagree on whether it was indeed just a particularly large snake or if it did indeed possess many heads, with more growing for each one cut off. The earliest source, Hesiod, didn’t mention anything about the number of heads, but the suggestion of multiple heads dates back to about 700BCE and is found in both written sources and visual depictions. Some ancient sources give different numbers of heads, like Simonides, who says the Hydra had fifty of them. Pseudo-Apollodorus, on whose account I have based the above summary, claimed that the Hydra had nine heads – eight of them mortal, and the ninth immortal.

The sources do, however, agree that it was huge.

Early visual representations show the Hydra as simply a many-headed snake, including classical and Hellenistic era vase paintings. At the Temple of Zeus at Olympia, the ends of the temple were adorned with twelve metopes (square sections of relief sculpture) depicting the Twelve Labours of Heracles, and here too the Hydra is a large snake with many heads. There are even mosaics from first century CE Roman buildings.

Later depictions, starting in the early medieval period, give the Hydra a more draconic look, distancing it from the concept of a snake and making it more monstrous – by giving it feet and wings, and adding embellishments to its heads and necks more reminiscent of a dragon than a snake.

The Hydra in Modern Stories

The Hydra that modern audiences might be most familiar with is that in the 1997 Disney film Hercules, where the Hydra had two feet with sharp claws, and started out with one head. It had spikes on top of its head, all down its neck and along its back. When Hercules cut off its head, three grew back.

Fantasy fans may also be familiar with the Hydra of Dungeons and Dragons, which also has a draconic appearance, lives in swamps, and usually has at least five heads. The D&D version comes in fire-breathing and ice-breathing varieties too. Interestingly, the swamp element of the D&D Hydra might just be a reference to the ancient sources – Strabo suggests that a particular swampy region known for bad smells is the location where Heracles killed Nessos, the Hydra’s poison from Heracles’ arrow having had a lasting effect on the waters and left them foul and stagnant.

These modern popular culture depictions – which also include Percy Jackson and the Lightning Thief – all reflect the medieval view of the Hydra rather than the classical Greek and Roman version. The Hydra is now seen as a type of dragon, sometimes wingless, but with features much more like a dragon than a snake, including having legs and spikey features on its heads.

The Hydra has also been widely used as a metaphor for an organisation, usually sinister, which cannot be defeated due to having so many members that once one member is defeated others will step up to take their place. This usage dates back to Roman political discourse, though is perhaps most famously used as the name of the shadowy organisation in the Marvel Universe that seeks to control the world and is a particular threat in Captain America’s movie appearances.

The Hydra is a fairly fixed concept, with variety only in whether it looks more like a dragon or a snake, and whether it has legs or not and if so how many. It is generally regarded to be animalistic in its intellect – a monster rather than a character – but that doesn’t have to be the case in your own stories.

How would you depict the Hydra – and how would your characters decide to kill it? Surely there are better ways than Heracles’ approach! What depictions of the Hydra have you found particularly interesting or inspiring?

Alice Leiper
I'm an ancient history graduate and I draw themes and ideas from my studies to inform my writing. I prefer low fantasy, without any (active) magic, dragons or elves, etc, instead focusing on how characters act in certain situations and interact with each other. I also write articles about ancient Greece and Roman Britain, which can be found on suite 101 and my tumblr, perpetualpast.tumblr.com. Aside from writing and studying ancient Greece, I also enjoy painting, which I do with my fingers because it's relaxing and creates a very impressionistic style. I also play computer games, including Dungeon Defenders, Minecraft, Left 4 Dead, Portal 2, and Guild Wars.