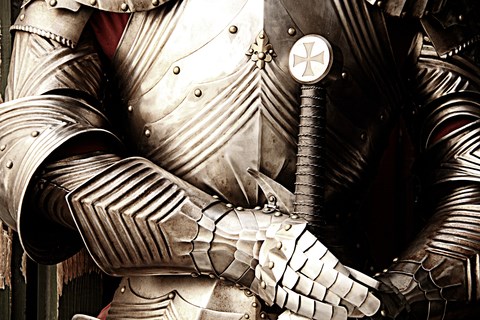 Description: The physical appearance of this armor may be as trivial as a charm, as conspicuous as a sensationalized suit forged in the mind of an adolescent, or completely nonexistent. This powerful, yet cursed, armor cannot be found, bought or made. Rather, it is bestowed upon a person who is caught up in an amazing set of circumstances and must survive to appease the insatiable need of the audience. In most cases, the wearer will survive all life-threatening events, but may suffer any degree of wound. This armor will see the wearer live until indefinitely with the exception of: belonging to a story centered on sacrifice; belonging to a tragedy; the story is complete and the character must die to herald a new character; the audience calls BS loud enough that the universe responds.

In a season 8 episode of the Walking Dead, Rick and his allies stand behind a wall of metal and challenge the members of the Saviors to hand over Negan. Rick, as well as his allies, are armed to the teeth, have excellent defensive positions, and are within spitting range of their enemies. Instead of killing Negan, the main leader of the Saviors, he threatens the other members that if they don’t hand over his antagonist, the rest will suffer his wrath. Shots are fired, not at the enemies clearly within range, but at windows high above. Negan lived to see another episode.

Why didn’t Rick order his allies to kill Negan and the other leaders of the Saviors? That was his intent: to kill Negan. Rick doesn’t have any sympathy for the other members. In fact, he outright hates all the Saviors for their tyranny and the torture he and his friends suffered at their hands. Why did all of them get to live? 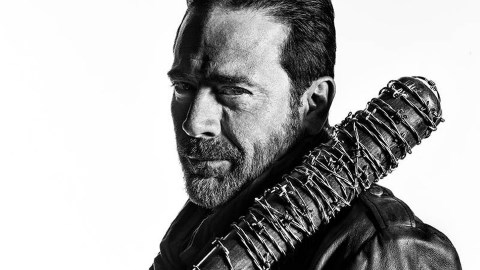 Well, they all were blessed with a powerfully enchanted item called Plot Armor. If Rick would have done the logical thing, an action consistent with his state of mind and capabilities, the season would have been over, or at least shortened. But the writers and producers of this popular story didn’t want the season to end so abruptly. They didn’t want to, or couldn’t, conceive of another means to have this exchange between the two factions occur while providing logical reasons for both parties to survive.

Pulled Out of Immersion

Plot armor has the undeniable consequence of labeling the audience “stupid.” We are expected to believe the laws of physics, human logic, and the durability of a (human) body suddenly change to allow the story as related to the character(s) to move forward. The audience is pulled out of their immersion and must consider or reconcile commonly held beliefs to continue watching. While a breakage in immersion isn’t necessarily bad (think of a person reflecting on the story and its relevance to the reader), such distractions as plot armor shift the focus off the story in a jarring way.

Plot armor is lazy. The writers of the Walking dead could have conceived of another method to showcase this standoff. Or, Negan could have died and someone more sinister could have taken his place. But the writers wanted to show off these shiny bits of visual stimuli instead of a compelling and logical story. As said by director and producer John Lasseter:

“If you’re sitting in your minivan, playing your computer animated films for your children in the back seat, is it the animation that’s entertaining you as you drive and listen? No, it’s the storytelling. That’s why we put so much importance on story. No amount of great animation will save a bad story.”

I could give a pass on the writers if the TV series outpaced the comics, or if the TV series was slated for seven seasons but extreme popular demand forced the production company to hastily create another season. Neither is the case. The comics will soon see their 173rd issue in November 2017. The writers have access to the source material and could have judiciously weighed the strength of the plot. Any shortcomings could have been changed, any plot holes could have been changed, all the errors, especially plot armor, could have been avoided had they planned.

How can you spot plot armor?

Planning and revision are the keys. I’m not preaching outlining your stories. Outlines can still lead to plot armor, especially if a writer has invested so much into an airtight story and doesn’t want to change a scene to accommodate illogical invulnerabilities. A writer must take honest criticism, be willing to throw out their darlings, and revise the scene to give their audience something genuine. The audience is expected to fork over their limited commodities (time and/or money) to the produced story. Some revisions will require you to place Chekov’s gun earlier in the story. You may need to scrap the scene completely, or change motives (of either protagonist or antagonist). Whatever your decision, invest your time to produce something of quality.

What other examples of plot armor can you share?

How has plot armor impacted your consumption of a story?

When have you seen plot armor in your stories and how did you correct it?

very cool fact, Drago. I love it when a villain monologues.

Did you incorporate a villain’s monologue? Villain’s monologue, also known as Evil Gloating, is when the antagonist has power over the life of the protagonist. Instead of killing the hero, the villain brags, taunts, or reveals his motives.

The film Moana has a very clever take on this. At one point a giant evil crab, Tamatoa, has the hero within his grasp. Instead of killing her, he decides to launch into a monologue – via song – which turns into one of the best musical numbers in the film. And of course…

In this instance, it is obvious that the armor of invulnerability was intentionally used by the filmmakers for comedic results. And it worked brilliantly.

If you don’t mind spoilers, here is the musical number.