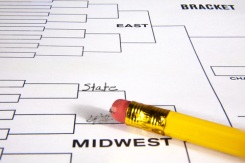 This article is written by Ken Hughes.

What do sports brackets have to do with writing a story?

A plot depends on conflict and contrast between its characters, and on building interest in them over time.

A tournament’s system is about matching opponents together and tracking how that changes.  It’s one of the simplest, purest methods there is for managing the intricacies of a plot, while staying focused on what makes it powerful.

As we’ll see, the bracketing concept needs only a few expansions to fit any kind of plotting into it.

Simple Brackets: Who’s after Who

Brackets in sports are used to match up opponents, and then show how the winners from those matchups go on to compete in turn.

The simplest kind of story to use this pattern would involve different characters who were each out to kill the others, ruin them, best them in a competition, or otherwise force them out of the plot.

For instance, the story of a cop breaking free of an interfering mayor and then facing off against a serial killer might show up as

As the red markings show, each set of three lines is the elements of a scene, such as “the cop and mayor square off, and the cop wins.” (Of course for most stories, the brackets would only be tracking their most pivotal scenes, not the other events that build up between those. But we’ll get to that.)

Then again, this format shows how that the plot looks somewhat incomplete compared to classic tournaments, because the killer has nothing vital to do at the onset. Also, many stories would give our hero a mentor, friend, or such who makes his own move on the killer and comes to a tragic end, leaving the hero to avenge him:

By filling out the bracket with someone for the serial killer to beat (or specifically, kill), both sides now go into that final showdown with some dramatic weight–all from just two essential scenes before that. And judging by how crowded fiction is with dead mentors, partners, and the like, it’s clear that setting up a conflict with a previous conflict has real power.

Let’s consider one more aspect of a sports matchup that this plot could use.

Instead of plotting around two good guys and two bad, how about changing it to one hero against three villains?  Perhaps our cop goes against a genuinely corrupt mayor, a crime lord, and a serial killer, all enemies of each other:

Each plot has its advantages. Using three villains lets you surprise everyone with how the crime lord, whom our hero was hoping to bring in himself, gets taken out by a “simple” serial killer. Still, the version that leaves the hero’s ally in the brackets (and the crosshairs) builds sympathy for the hero’s loss, though it doesn’t have the sheer unpredictability of so many competing enemies.

You can fine-tune the story in many more ways just by altering who goes into which bracket slot, and then playing up expectations around that. Here, since the mayor gets settled first, that probably makes him (and the whole idea of city corruption) look like a lesser problem when compared to the crime lord, who’s probably pulling their strings… and a fun twist when that manipulator is beaten by a more ruthless killer.

Or a different version could have the crime lord outwit that killer, or swap positions so the seemingly cowardly mayor kills that killer, and emerges as the greater threat.

Of course, most stories leave more than just one character standing at the end. So let’s consider how (just as many tournaments allow multiple losses before a participant must leave), a “story bracket” ought to allow enemies to run testing attacks and failed schemes before they’re finally eliminated.

For instance, suppose instead of being murdered the crime lord survives and joins forces with the cop to stop the killer:

In fact, maybe the killer has tried to attack the mayor first, and that failed attempt is what leaves him in need of the crime lord’s help, before that went bad:

By this time the killer starts to look like a wounded animal, beaten by one side and driven to try to work with another, and the blowup of that drives his ex-partner to the cop.  While in contrast, that cop has been able to bring down the mayor completely, and now makes an alliance with the crime lord work too.

Letting people interact in new ways can build up new interest… though allowing someone to go through more and more steps without anyone being eliminated does dilute some of the energy of a single-elimination “tournament.”

Also, let’s think again about which sides are in use, and what kind of balance they form between them.

Using that mayor alongside the two out-and-out criminals gives the story a wider scope, while replacing him with a third official crook would put more focus on the underworld. Or if the mayor was replaced by a simple thief, but the crime lord by a competing cop, the same pattern takes on new meaning.  It’s easier to believe the second cop, after failing to nab the killer, would join up with someone who’s now only a professional rival.

Or some slots in the brackets might go to whole other issues, subplots, or emotional challenges that are different from the practical ones that are usually the spine of the story. If the cop’s also trying to make time for his sick sister, that provides contrast with everything else–especially the times one plot interferes with (or ends up helping with) the other.

Just how different to make each point from the others is its own challenge.  Do you want tighter conflicts centered around one crime, or a wider net of things coming together? These are the types of options that open up when enemies and rivals are given enough ways to interact.

Steps on the Way

We’ve been charting the main incidents during which major characters cross paths. Yet there will also be smaller incidents that move the story forward.

Our cop will work through a series of clues and dead ends, while his enemies send throwaway thugs to attack him before the real move is made.

These steps might involve lesser characters who only occasionally affect the story. Our cop’s allies, or the crime lord’s minions, can stay in the background for a number of scenes, and then come to the foreground to make a difference.

Some of those characters may have a few scenes, or only one.

Keeping Track of the Momentum

More than anything else, a story draws its energy from its characters and their interactions.

Using brackets is a helpful way to track which characters cross one another, who ends up removed from the story (or otherwise changed or helped), and what interactions follow in turn. It’s all about keeping track of the momentum.

So, why not plan out a book like a bookie?

Also, do you find planning out the details of your plot to be helpful or harmful to your personal writing style?

Ken Hughes is a novelist, technical writer, and author of the Unified Writing Field Theory blog. For more of his musings and info on his latest book, SHADOWED, see kenhughesauthor.com.

Now you’re talking my language! When you set it up like that, it makes so much more sense to me. I really like how everything is detailed and in it’s place on the brackets.

I admire people who are able to do this type of ‘mind-mapping’. I’ve never done much, or considered myself really good at it. My brain doesn’t like to think past more than a few points at a time. I dislike really deep plots in stories because of this. However, to those who have the talent or ability to lay things out like this, my hat goes off to you!

It kind of reminds me of mind-mapping, but in a converging style. This would be a great backbone for a thriller novel.

Sometimes I realize my story characters lack background or history only when I’m in the late storyline. It often threw me off track. Well, this bracketology really helped me to see the big picture, literally.  Very nice strategy Hughes.

This is something that requires fine character management. At the end of the day, we really need to know what we want from our characters. Every one of them is humane in their own rights and ends, therefore mapping out everything can be a real hassle. This isn’t just about character conflicts, but rather how a positive relationship can spell disaster for another character. Bracketology is good in terms of practice, but via experience (?), I can virtually say that the serious deal will be more of a cobweb.
http://www.figure.fm/en/post/5037/Type+Moon+Universe+Character+Relationships+Chart+Contains+Spoilers.html

I can only imagine what George R.R. Martin’s brackets would look like.

Bet Tolkien would’ve had a HELL of a bracket!

Sometimes it depends on the plot itself, but usually harmful.

This is brilliant. THANK YOU for sharing. I’m going to be using this right away.