This article is by Daniel Adorno. 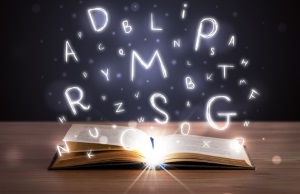 Have you read an epic fantasy novel recently?

Ever notice how every race in a fantasy world must have a unique culture, history, and language?

It’s almost unheard of to not include each of these aspects in the genre. It’s become a convention fantasy readers have expected since the days of Tolkien. If you leave any of these out in your story, you’ll probably pay a heavy price in readership.

That’s why savvy fantasy authors include them. Not just to meet the conventions mind you, but also to create an engaging world. Epic fantasy necessitates an EPIC world filled with nuance in the areas of culture, history, and language. But I’d argue that it’s the last of those three, language, that trips up most writers.

I’ve read fantasy authors who’ve created complex histories and vibrant cultures in their books, but either made a half-hearted effort on the language part or ignored it altogether. Why is that? I’m inclined to believe this is due to the fact that Tolkien, the master linguist, set the bar too high for fantasy authors to reach. When I penned my first fantasy novel I was intimidated to create a language for the magical races in it. I mean, how do you even touch something like Sindarin or Quenya? Short of being an Oxford-trained linguist, you don’t.

But rather than curl up into a ball and cry at my predicament, I decided to take a few pages out of Tolkien’s playbook and simplify the task before me. Lucky for you, I’ve laid it out in three easy steps!

J.R.R. Tolkien based Quenya mostly on the Finnish tongue, but also incorporated many other ancient languages in his construction. He also created a plethora of dialects based on regions and history since he reasoned that elvish, like English or any other spoken language, would change over time or be spoken differently in various regions. Unless you want to die never having published a single fantasy novel, I do recommend you emulate Sir Tolkien in this regard. When you set about creating a language from scratch, it’s best to just pilfer the lexicon of an existing tongue.

For example, when I began constructing a language for the elves in my book, I researched ancient Welsh. And by “research”, I mean looked up in Google. I made a list of the common greetings, phrases, and words that the elves in my story used then looked up their Welsh equivalents on whatever translation sites Google suggested. Sound deceptively easy? Good, it’s supposed to be! Don’t set out to construct an entire language from scratch–unless you’re a language nerd, then by all means go wild. Settle on a root language that embodies the traits of the race speaking it. I chose Welsh for my book because it matched the ethereal and graceful personality I wanted for the elves in my book. It may be the complete opposite for your book.

Okay, on to the next step.

2. Tweak the Root with a Secondary Language

Once you’ve chosen your root language, add a bit of variety to it by mixing it up with a secondary language. Think about the English language for a second. We use all kinds of words that are derived from other languages. Words like resume, blitzkrieg, karaoke, and chocolate! So in the same vein, add some Latin, German, or Portuguese into your root language. You could even go the extra mile and combine prefixes from your root language with suffixes from your secondary language. This is what I did with the elves in my book. I combined several Welsh words with Latin to create a hybrid language. I suspect J.K. Rowling did something similar when she created the words for magical spells in the Harry Potter series. Many of those incantations have Latin roots. So go ahead and add flair to your chosen root with a secondary language. You’ll have so much fun with this you might even forget you’re writing a book!

Some great resources for finding and translating your Root and Secondary language include Lexilogos or Google Translate.

This is the most important step of all. You must be diligent about keeping a journal of all the word constructions for your language. Try to keep it simple by making lists of words that the chosen race will speak often in the story. There’s no need to make an exhaustive dictionary of every word or phrase. Stick to the basics like “hello”, “goodbye”, and “prepare to die!” The last thing you want is to get overwhelmed with researching languages and bog yourself down. Remember you have a fantasy book to write!

Once you’ve created these lists and looked up their translations, consider putting them in an appendix in the back of your book. Readers are naturally going to be curious about the meanings of the words that pop up in the story, so why not make it easy for them to reference? Plus, you’ll impress everybody with your awesome language creation skills!

Have you ever created a language for characters in your story? What are some tips you can share about that process for authors to emulate? Any obstacles you didn’t expect?

Daniel Adorno is an independently published fantasy and sci-fi author who loves talking about the writing craft and the self-publishing industry. His latest book, Thy Kingdom Come, is a post-apocalyptic novel available on Amazon. Connect with Daniel on Facebook, Twitter, and at danieladorno.com.

im trying to invent a new language for the nelvaanians from the star wars universe where they are in their medieval times.

I’m creating a new language just for fun.
I don’t have plan to put it into my story cuz it doesn’t necessary.
I also avoid confusion.
what if i put a long ass conlang sentence into my story and readers stop reading cuz the doesn’t understand anything?
Even if i put the translation below after the chapter ends an unknown language is annoying.
As a reader and an author i dislike too many unknown words when i read some stories. That’s distracting and annoying srsly.

One my principal reasons for writing science fiction is to present ways in which we might communicate in a first contact situation. The best way to find out how I did that with my termite people is to check out my 2v. novel The Termite Queen, where a linguistic anthropologist has to decipher a non-oral language.

Lorinda, thanks for commenting! I can’t imagine how challenging it must be to have a character translate a language where audible words aren’t used by the culture/people in question. You really have to stick to showing rather than telling in that situation! Kudos to you for tackling that.

Actually it was a lot of fun! The Language Creation Society is a great place to start if you’re writing a conlang for your book. http://conlang.org/ Also, check out the Facebook group Linguistics and Conlangs. https://www.facebook.com/#!/groups/Linguistics.and.conlangs/

I have created a language for an ancient people (the appropriately named First) for my epic fantasy series, Pearseus. I researched (read, googled) Indoeuropean protolanguages for that, throwing in some Mogul influences. Hopefully this approximates what people might have sounded like a few thousand years ago 😀

Wow! That’s amazing, Nicholas! I bet many hours of research went into that, but it’s worth it if you can accurately capture an ancient tongue and provide depth to the world you’re creating for readers. Excellent work!

Sometimes I look up the etymology of different words for ideas when making up words. The made-up words rarely resemble the root words, but it’s a great source of inspiration especially when I want to give my words certain meanings. etymonline.com is the site I use the most.

Enjoyed this article a lot! I love words, though certainly not as much as Tolkien–no way I’d have the patience to create an entire new language. Usually I just make up new words as I need them.

S.E., thanks for the resource! I’m always on the lookout for more etymology sites! And I totally agree that coming up with an entire language like Tolkien takes a lifetime of patience which most authors can’t spare because we have books to write!

Thanks, Kayelle! Glad you liked it and that’s so awesome you made a 30 page lexicon! I would agree that using the language sparingly is the best way to stir intrigue in the reader, but too many foreign phrases will either bog down the story or annoy the reader. Thanks for sharing!

I have lexicon for my Kin people that’s over 30 pages of words and phrases. I created it for fun when I had a job where I used to fill in for someone during their lunch hour, and my sole job was to answer a phone that rang about 3 times. Now, whenever I need a character to say something, I have a huge list of words from which to string a believable sentence. The key is not to use too much, and always make a way for the translation to be seen right away. I enjoyed your post.