This article is by Eleanor Konik. 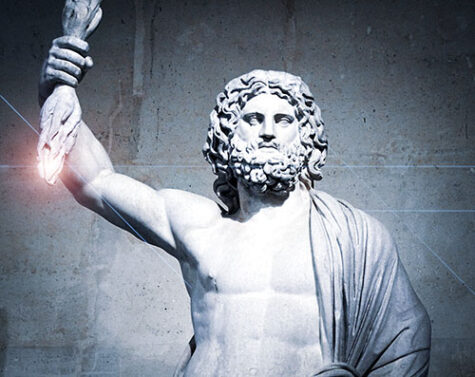 Creating a myth cycle is one of the hardest and most exciting parts of worldbuilding. I’ve written previously about how to frame a myth cycle around a war, but another useful trick is to imagine deities as modern-day celebrities. It’s an exercise teachers often use when teaching about Greek mythology. For example, Hannah Petersen does a really nice job of comparing 2010s era celebrities with Greek gods:

Aphrodite was known for appearing in front of each person as the one they desired most in the world. She was the goddess of love and sexual desire, and was kind of portrayed as a cold-hearted bee-otch. Now, in no way am I saying that Kim is the devil, but she is seen in the media as being overly-obsessed with her looks and perception by others. Also, she’s drop-dead gorgeous. Ares, on the other hand, was the hot-headed god of war and rage. I don’t think I need to cite all of the times that Kanye has interrupted others on stage or gone off on a Twitter rampage, so suffice to say, these two are the perfect match for Aphrodite and Ares.

Greek mythology plays an outsized role in American curriculum because of the Renaissance tradition of a “Classical” education. As a result, this sort of thing isn’t done nearly as often with other mythologies.  I wasn’t able to find any similar lists for Norse or Hindu gods, though it wouldn’t be hard to create one. As an exercise for internalizing the polytheistic perspective, it’s really useful.

Much has been made of celebrities who are like gods; sex goddess is certainly an epitaph applied to more than one famous lady.

But the corollary is important for authors to remember. For most of human history, the gods aren’t omnipotent, omniscient, and omnipresent the way they are posited in many modern theological circles; they’re powerful people who get stories told about them and who are attributed influence over large scale problems and can impact their lessers in surprising ways.

We need more of that energy in fiction. A lot of fantasy concerns itself with which sphere of influence a god or goddess oversees. You see a lot of examples of a god of war or a goddess of healing, with priestesses and clerics and paladins who have war magic and healing magic. Paladin’s Grace by T. Kingfisher is a great example of the sort of novel that was clearly inspired by Dungeons & Dragons. Nightseer by Laurell K. Hamilton is another.

These stories jive with the role of ancient priests as experts and temples as repositories of knowledge, but they don’t make for terribly fun mythologies. Realistic myth cycles are much more concerned with who is having babies with who than which magic ability matches up with what sphere of control.

It wasn’t just the Greeks (or the women) who had affairs; Like many American Presidents, Odin had his share. This isn’t to say that affairs are ubiquitous in mythology — the Hindu gods are much more decent in their relationships overall. But even Hindu gods aren’t immune from accusations of infidelity; Shiva’s affair with Mohini is all the more salacious for its abnormality.

A society’s myths and stories reflect that society, particularly its relationship to its history.

Ancient Greeks viewed most of their gods as childish elites with the power to disrupt lives for petty reasons just as easily as moral ones. How many Greek leaders must have stepped out on their wives and behaved scandalously to create a cultural narrative where it felt normal for the ruler of Olympus to behave as he did? Some gods were respected, like Athena and Hestia, but for the most part, the stories surrounding the Olympians and their antics have strong parallels to modern pop culture.

Consider Western celebrities. Some handful are viewed as entirely wholesome figures, like Keanu Reeves. Others are humanitarian powerhouses, like Angelina Jolie, who simultaneously boasts a past almost too outlandish to believe. Between wearing Billy Bob Thornton’s blood around her neck and rumors of incest, her story would certainly sound mythical to future generations.

Certainly there are modern celebrities too powerful for their own good, and not just the “new adult” sensations like Justin Bieber or Paris Hilton. Consider Mel Gibson’s anti semitic rants and domestic violence. The way Wynona Ryder is defined by a shoplifting (although stealing is hardly unique for stars).

According to Tim Wu, humans have an instinct to look for “transcendence of the normal.” Humans seek figures that operate on a different plane, whether real or imagined. These figures, religious or celebrity, don’t need to be more virtuous or loftier than “regular” people. They don’t even need to be worshipped. They just need to become part of the cultural gestalt.

It might feel vaguely sacrilegious to compare Sekhmet, the lion-headed Egyptian goddess of healing and medicine with, say, Gwyneth Paltrow, but Paltrow indisputably has a following. What began as a personal newsletter is now a multi-million dollar health and wellness brand. But that’s not all there is to Paltrow. She’s also famous for how her divorce went and for being one of Harvey Weinstein’s victims.

Consider how many pagan gods are the gods of seemingly random concepts. Thoth is the god of the moon and writing, but his main duty is weighing the hearts of the dead.  Ganesha is the god of beginnings, the remover of obstacles, and a patron of writing and wisdom.

The Books of Glittering Stone, part of the grimdark Black Company series by Glen Cook, involve a wonderfully detailed mythology that parallels Hinduism. The narrator, Croaker, is fighting against the goddess Kina and the death cult aimed at her rebirth. He observes that that 400 years ago, the Kina and her extended family were probably just a group of powerful, bickering intermarried mages — and that in 400 years, he and his own interconnected family will probably be viewed in a similarly exaggerated, larger-than-life manner. Thusly are the gods — indescribably powerful mages who whims and goals seem incomprehensible grand to mere mortals — born.

Ilona Andrews does a similarly wonderful job showcasing the complexities of different religion and mythologies. In the urban fantasy novel Gunmetal Magic, the Egyptian god Anapa recounts his own origin story as he explains to the protagonist how godhood begins:

My deeds were told in front of evening fires, my victories, my adventures. They kept me alive. My descendants made a shrine of bone and stone and prayed for my guidance. My tribe prospered and the more they prayed, they more powerful I became, until finally I came to be again.

He goes on to explain that it is the nature of people to plead for help from beings more powerful than they are. Farmers beg the sky for rain and build shrines to engineers who irrigated their fields, he claims, the way we might build a statue to memorialize the inventor of the railroad.

Instead of embracing a religious system that emphasizes objective, abstract gods-as-concepts, try envisioning gods-as-people. Consider: what real-life figures are the deities in your mythology most like? What seemingly unrelated aspects do the gods have control over because of a quirky event buried in their background? What sort of attitude do the people in your world take to toward their gods? Toward members of the socio-political elite?

The messier the mythology is, the more human — and therefore realistic — it will seem.

Eleanor studied ancient philosophy and religion before graduating law school in 2011. Now, she teaches world history and spends the bits of time left over writing books that bring ancient history — and magic — to life. She blogs about ancient civilizations and mythology and enjoys participating in #WorldbuildingWednesday on Twitter.

Great article. I know an author who has done this quite well. Have any of you read the GoneGod series by Ramy Vance. http://www.paradise-lot.com/

I haven’t, but it’s part of KU and the premise looks a bit like Ilona Andrews’ Innkeeper Chronicles, so I’ll check it out. Thanks!