This article is by Assaph Mehr. 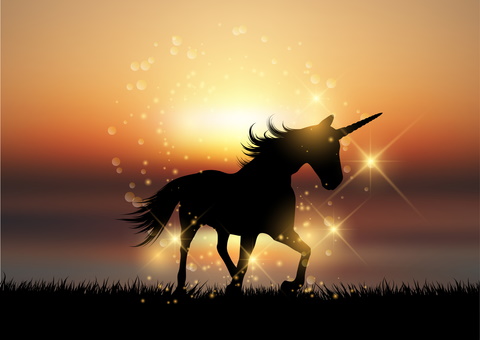 I was recently invited by a closed Facebook group (the Historical Fantasy Book Club, which I’d highly recommend) to do an “author takeover”. I thought rather than talking about my usual topics (Romans, and their obsession with fantastical beasts and how to cook them), I’d try to create a broader discussion, one about the various shades of Historical fantasy – specifically how much and what type of “history” are addressed in books of this genre.

This turned into a lively and thought-provoking discussion, so I’ve expanded my short and fragmented musings there into an article about how Unicorns and Icebergs are related (or about defining and world-building historical fantasy, if you’d prefer).

First, let’s describe what historical fantasy is and exactly what makes a work fall under this heading. I see this as a scale (nothing in life is ever simply binary). On the one hand is a real, well-researched historical setting with just a touch of the paranormal. Certainly more than a simple “superstition” that could be explained away (like in The Hound of the Baskervilles, by Conan Doyle), but the occult references would be limited. Often a magical creature or so, and the rest is very much our “real world”. Interestingly, I think many fantasy tales written in our history (i.e. written pre-20th century) are of this type. Take the Arabian Nights, for example. They are grounded in our real world, but the supernatural is just part of life. This often reflects the mind-set of people in historical context as well.

On the other extreme are stories set on secondary worlds, and what makes them “historical” is that there is more than the fantasy-standard faux-medieval (or similar) setting. The author goes to a great length to ground the story in a specific period of one of Earth’s cultures, but for whatever reasons doesn’t choose to base it in our world. It doesn’t really matter why they chose to go that way – it’s the focus on real history, not just generic elements like terms for horse barding but a whole culture and setting – that’s important. It is almost as it the setting becomes a character in their own right. This is true for a lot of Sci-Fi and Fantasy with memorable worlds (with the equation becoming “Story = Character + Conflict + Setting”), but there is something in the real-history with fantasy combination that makes it irresistible to so many of us.

As examples, Harry Turtledove’s Videssos Cycle tells of one of Caesar’s Roman Legions transported to a world where magic exists. This world is based on Byzantine cultures and symbolism, and (like most of Turtledove’s works) falls under the genre. Leigh Bardugo’s Six of Crows, while it has a wonderful world loosely borrowing a “feel” of 17th century Amsterdam, does not. While well written and cosntructed, Bardugo just goes for a setting that isn’t your medieval trope, and doesn’t aim to combine real historical elements in her setting.

My own writing falls in this latter end: I was afraid I’d never match up to the historical-fiction authors I admire, with their university education in classics and history and the amount of research they do for each novel. On the flip side, my stories needed only the cultural background, and not specific persons and events. It allowed me a greater degree of exploring speculative fiction’s ultimate “what if”.

I ended up borrowing real people (like Cicero), but I had the freedom of placing them out of context. Not only have I mashed his legal and philosophical works (De Legibus – On Laws – with De Natura Deorum – On the Nature of Gods) to make a treatise about the laws of magic and men, I also brought him out to speak out in courts when a case for Felix involved a legal debate about the use of forbidden magics. It allowed me to answer some parts of that “what if”, about how to Roman’s sophisticated (and volatile) court system would handle magic, without worrying too much about which year it happened, where he was, and what other grand events (like the decline of the Republic) were going around.

In between the two extremes are a great many varied settings, probably about as much as there are Historical Fantasy novels and authors. To mention just a few, better known works: Ben Aaronovitch’s Rivers of London is Urban Fantasy with historical elements; Naomi Novik’s Temeraire is an alternate-history mixed with fantasy, a retelling of the Napoleonic Wars with dragons. Guy Gavriel Kay has covered many periods in many styles in his varied works. There is also a lot of overlap with other fantasy sub-genres that can be classified as historical-fantasy as well: alternate histories (with or without magic, for different speculative slants), steampunk (anything that introduces a “fuzzy” technology to an out-of-context historical period), or based on the culture and period: antiquity, Celtic, medieval, gunpowder, Wuxia (Chinese). It’s all about the blend of real history in there.

After this preamble, I asked group members what are their preferred location on the scale, as readers and writers? What were some examples that stuck with them, and what kind of settings do they keep going back to? Importantly, I asked them to think not in terms of plot or characters that drew you to the story, but in terms of the historical elements and how they were combined with fantasy.

And the responses were surprising. Many more works were mentioned, generally people enjoyed anything on the scale from “soft” to “hard” historical backgrounds in their fantasy. But authors often preferred one end as readers, and the other as writers!

This didn’t go only one way (answers came from both ends), but a common theme was just like my reasoning – a fear of making historical inaccuracies. These are annoying as readers, but mortifying as an author. This leads us to the next section.

History is amazingly interconnected, sometimes in very surprising ways. Still, that’s the ultimate “what if” for which we read, no? It’s only natural to want to explore the effect of an introduced change across time – both as readers and writers – and only natural to be at awe of the complexity of historical processes. So let me tell you about icebergs and unicorns, and how they are related!

When it comes to world-building, there’s an “Iceberg Principle“. You surely know that icebergs have 90% of their bulk invisible under the water. It’s sort of like this with world-building. While you need to do your research and expose rich details, we authors also all know that we can’t expose everything we found and thought about in the written novel. We have to worry about the plot and characters, after all, or the equation above will become unbalanced and the story won’t hold interest.

So you need to know your stuff, but in writing you only need to give the impression that there is 90% more to the world that hasn’t got onto the page. This should give any author the space they need to focus on the story, and not get stuck in minutia of research.

Take, as an example brought by one group member, the implications on Victorian society that the discovery of unicorns had back in Chaucer’s time. You don’t necessarily have to map every single event or battle from the 14th century to the Crimean War – it’s enough to mention how at the Battle of Culloden the Scots rode proudly on their national emblem to no avail, and then misquote a couple lines of Tennyson about The Charge of the Unicorn Brigade… In this way, in such small asides, you integrate events from history and give your story (and readers) the breadth and (illusion of) depth that makes for enjoyable historical-fantasy. It provides a rich tapestry that the reader can build up in their minds, without bogging down the story in irrelevant details or bogging down the writing with unnecessary research.

As another example, though I stand by my decision to use a secondary world as my setting, I do sometimes wonder how Felix’s stories would play out in real Rome. (Usually that happens when I fantasise about my books being turned into a GoT-style TV series). And I usually find that, with a few alterations, it could have worked just as well. One, if this ever becomes a Hollywood production then we all know exactly how much history is correct in such (zilch). Two, Murder In Absentia tells of a murder without a murderer, but has ties to secret cults and necromancy. Without giving any spoilers, I could have told the same basic story (the same human drama of character + conflict) in a Sci Fi setting with a background of a zombie-virus or something. But as much as I like Sci Fi, I love history so much more. So I told the story my way.

And I believe that’s the key, the quintessential element of historical fantasy: once you’ve nailed the addition of fantastical elements to the historical background, it’s the story that matters. Historical Fantasy adds a third factor to the “plot = characters + conflict” equation, one that is dear to our hearts, but nailing it down isn’t all that hard. Wherever a particular work sits on the scale of soft-to-hard, it’s the speculation that start with real history and asks a fantastical “what if” that goes beyond making the setting into a character in itself, and is the defining element of historical fantasy.

I hope you’d excuse the meandering philosophical rambling, and that you found the Iceberg Principle both informative and encouraging (especially since it applies to fantasy world-building in general). As a reader, it might make you notice how much of a collaborative effort books are – they start in the author’s mind, but you build your own picture from the clues they leave you, not from overly detailed descriptions. As an author, I hope you find it freeing, that it breaks inhibitions and research-paralysis in writing with useful tips on short-cutting the process.

Assaph has had his nose in a book since he was five, so it wasn’t surprising that he turned to writing. All those years reading on ancient Rome, sci-fi, fantasy, and mysteries while practicing various martial arts, travelling the world, and working odd jobs lead to some interesting combinations in his stories.

He is now busy writing the third novel in his Togas, Daggers, and Magic series, for lovers of Ancient Roman detectives and Dark Urban Fantasy. You can find his books, musings, and free short stories on egretia.com.

Great post! I love the broad scope of historical fantasy – I like both the real historical stuff with just a hint of the fantastic, and the full-on “historical-inspired” fantasy. 🙂 Right now I’m working on a dieselpunk series set in the real world in the 1920s, so I’m trying to get all my historical stuff right. But it’s also got the punk tech and some magic, so I’m world-building, too.

Thanks for the kind words! 🙂

Take a look at Richard Knaak’s Black City series – it’s set in 1920’s Chicago. Nothing to do with ‘punk style, but the way he uses historical trivia to ground the reader in the specific year is brilliant.