This article is by Walter Rhein. 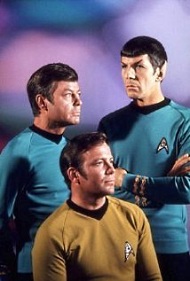 There is an inherent paradox in the phrase “focused ambiguity”. Yet the disconnect achieved by putting those two words together approximates the mental state necessary for writing good fantasy.

One of the big mistakes a lot of new writers make in their world building is too much of a focus on practical construction. However, unless the overall theme of your fantasy book is economics, you really don’t need to explain how your “diamond city in the desert” gets enough drinking water to support its population.

An effective novel always has a strong connective thread, and, in fantasy, every character, setting, and action can be molded to function as an integral part of the extended metaphor that supports the novel’s overall theme.

To put it simply, metaphor is the use of a term or phrase to represent something else. It’s an extremely fun concept for a writer to play with because once you get your readers seeing your work in terms of metaphor, there is no predicting the rich tapestry of connections they might begin to perceive. The stronger the metaphoric thread in the work, the more the reader is able to “take ownership” of the story and make it mean exactly what they want it to mean. I believe this leads to a work of greater overall power since the reader in some ways projects the story they want to read onto the tapestry you’ve provided for them.

Establishing the Rules of your Metaphor

Clearly there are cases where authors have had tremendous success creating realistic rules and abiding by them with absolute rigidity. I remember reading a story about how J.R.R. Tolkien had to delete an entire chapter when he realized that the full moon (which was an integral part of the scene) wouldn’t have been present on the date the sequence took place. This is an extreme example of a scenario all authors have to consider. There is no debating that it is imperative that writers establish rules for their worlds and abide by those rules. However, it’s equally important not to become overly bogged down with the practicality of your situations. If you are able to put your characters through implausible situations without breaking your readers’ suspension of disbelief, then you will have created a successful story.

When all is said and done, it’s the theme that keeps your readers turning pages. This is true in film as well as in writing, although the tools available to directors are different than those available to writers. “Star Trek” for example, generally deals with the dynamics of the personalities of the core characters, all of whom are instantly recognizable archetypes. It’s not too much of a leap to say that if you take away the spaceships and the techno-speak from “Star Trek,” you’re left with a show not all that different from “Friends.” Because the interaction of the major figures is the focus, other details can be somewhat vague. For example, I remember reading about some engineers who examined the placement of the Enterprise’s engines in regard to the overall center of mass and determined that the ship would simply spin in circles if it were ever built. But again, you can get away with this kind of oversight because “Star Trek” is about conflicting personalities and not about aerospace engineering. If you have implausible notions in your story that don’t disrupt the overall metaphor your work will still be successful.

The most common discussion point for my recent novel, The Reader of Acheron, deals with an instance where a writing choice I made comes pretty close to disrupting the suspension of disbelief. The theme of the book deals with the effects of slavery and oppression in many aspects of human life. Despite the fact that this book takes place in a fantasy/post-apocalyptic setting, the thematic overtones have to be relevant to our world or else modern readers would have no way to make a connection to the book. Bearing that in mind, it wasn’t my goal to construct a realistic slave world, but instead I sought to create a metaphorical one useful for examining certain ideas.

One of the principal characters is Kikkan—an escaped slave. Kikkan is prone to internal dialogues as he struggles with defining his own personal code of morality. This was a tricky character to write since Kikkan, as a slave, obviously lacks the education or vocabulary to express his feelings. When I was conceiving the character, I concluded that even though Kikkan might not be able to find the words for his complex feelings, it wasn’t improbable that he would experience them. Therefore, I decided that I could explain those feelings as a narrator without violating the laws of the world I had created. During the editing process, Janet Morris found a couple instances where Kikkan spoke using words that were perhaps a bit implausible based on his background and we substituted more basic language to make him more believable.

Throwing it to the Wolves

For the most part, Janet’s and my efforts to polish the metaphor component of “Reader” have been viewed as successful, although a couple of readers have mentioned certain aspects of Kikkan’s character. On Amazon, Doug McKittrick states:

Perhaps the one ‘complaint’ I have is that Kikkan, the slave, seemed too linguistically erudite than a slave could be expected, given the condition and existence of a slave. But this is truly minor in this otherwise excellent novel.
—full Amazon review

Even though the reviewer states that this is a minor concern, I still find it slightly troubling as a writer because it indicates I took the reader too close to the “ceiling of plausibility.” I have little doubt that this instance will cause the ceiling to be breached by other readers, but at the same time this metaphorical/semi-unrealistic depiction was necessary for the development of the novel’s overall theme. It’s interesting to note that in the case where a discussion on slavery is not the fundamental purpose of a novel, I don’t think a depiction such as what I used for Kikkan would function in the least. In this example you can see how theme can bond with metaphor to make a functional scene out of something that would have otherwise been detrimental to the effectiveness of the story.

All writers are tasked with constructing their metaphors so that they function on their own as well as in conjunction with the overall themes of the book. The writer must provide enough focus so that the metaphor is clearly understood, but must be ambiguous enough that the metaphor can be overlapped and woven into the overall tapestry. One of the more flexible illusions that a writer can work with is electing what parts of the metaphor to emphasize and what parts to disguise.

Where Metaphor Can Take You

Some writers get bogged down with a focus on “practical accuracy” and as a result they are reluctant to use metaphors that contain contradictory elements. My proposal is to use those “forbidden” metaphors and simply heighten the focus on the parts that are useful to the chosen theme, while blurring out the rest.

I suppose it could be stated that this is a disingenuous or even manipulative way of writing, but I disagree. All writers make choices as to what themes and ideas they expose their readers to, and censoring complex ideas simply because they contain contradictions is foolish. Furthermore, I believe that it’s through dabbling with emotions and ideas that are both complex and contradictory that the writer can elevate his or her fantasy writing to a level capable of making truly important comments on the human condition. To me that’s far more exciting than yet another tale of heroes in white hats attempting to eliminate an ever-present, monotonous dark lord.

How do you feel about metaphor being used in fantasy? Can you name some examples of it being done well (or poorly)?

Is it acceptable for a writer to break the rules of his/her universe, so long as it is done in such a way that the reader’s suspension of disbelief isn’t disrupted?

At what point does an over reliance on metaphor start to harm the author’s ability to communicate theme?

Walter Rhein is the author of The Reader of Acheron, Beyond Birkie Fever, and The Bone Sword. He blogs at HeroicFantasyWriters.com, and can be reached for questions or comments at: [email protected]

Metaphors is a beauty that no other forms of media can utilize. It can be difficult to relate this imagination with reality to and fro, but when it’s done correctly, it adds so much flavor to the novel. This is something blockbuster movies can’t produce.

Wuh-oh. I do get ‘bogged down’ with practicalities a lot. This article was really helpful because it made me think about whether or not I sacrifice some of the wonder by trying to make it real enough.

This article put into words what I’ve been wondering about much better than I could! Thank you indeeeeed. Not only do I think metaphor should be used in fantasy, but I believe that fantasy is the one genre of fiction that has more potential with that device than any other genre. (My opinion.)

As for over reliance on a metaphor… I have no idea. I have never seen that been done before! (Or maybe I have and just forgot…)

Sometimes a bit of ambiguity leaves room for flexibility as well as intrigue. I find the more specific I get the more constrained I am. Too many rules can strain the story at the seams.

Too true! Literature that makes good use of metaphorical devices is well-crafted literature indeed. The idea of focused ambiguity that you explored is quite an interesting concept and I hope to be able to accurately channel that mental state when I work on my own writing. I loved your example from Tolkien’s works – ouch, that guy is harsh on himself. Great article!

I really appreciate your analysis of the metaphor as it plays a role in creating and sustaining your universe. As you said, it can be an incredibly powerful tool… or a death nail, if not used correctly. Thanks for sharing your perspective! Your blog is such a great resource.

District 9 is an interesting example. They make it pretty clear what they’re referencing (there was a slum in Johannesburg called “District 6” in real life). But I think they got away with it by having all that super high tech weaponry. Watch for the scene where the hero hurtles a whirling pig at his enemies. That scene isn’t metaphor…just awesome (then again…it might have some sort of metaphorical context).

I think that the movie District 9 uses metaphor brilliantly. It addresses the topics of prejudice and racism without becoming heavy-handed or preachy.

That’s always the risk with metaphor: at its worst, it can hit you over the head like a hammer. But at its best, it can enlighten by helping readers (and viewers) to see past their preconceived notions.