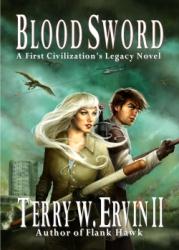 This article is by Terry W. Ervin II.

It is often said, “Write what you know.” This can be a stumbling block for some writers. How do you convincingly write a dastardly or evil character in a novel if you’ve never acted or done such things? That is where Role Playing Game (RPG) experience can benefit a writer.

Whether it’s space adventure (as in Traveller), sword and sorcery (as in AD&D) or even spy and espionage intrigue (as in Top Secret)—okay, you as the reader may be muttering, “Man, those games are old—no, near ancient.” But those are examples of games that I cut my RPG teeth on years ago, and those led to the foundation for some of my writing and storytelling ability. Even games like Diplomacy, Star Fleet Battles, King Maker, Axis & Allies, and yes, even Monopoly, can add a more strategic overview that may be of benefit to a writer.

As an RPGer, playing (or running) different types of characters in varied settings, one can come to recognize and appreciate the different goals, motivations, strengths and weaknesses of a variety of characters. An RPGer quickly comes to learn that the character they’re running is far more than the numerical statistics and the list of skills and abilities listed on a sheet of paper (or computer screen).

And, as an aside, I’ve come across many writers, especially on forums, that create ‘Character Profiles’ listing physical description, educational background, likes and dislikes, family, friends, enemies, and much more. Still, they struggle to bring a character to life in the pages of their novels and short stories—no matter how detailed and comprehensive the character profile. That’s because what comprises a character is far more than lists and numbers.

Taking on the persona of an elven wizard leading a party into the depths of a necromancer-controlled forest or a green secret agent attempting to infiltrate a small-time black market organization are just two examples demonstrating the wide breadth of experience an RPGer can gain in taking on a character’s point of view, and working through an adventure—which is, in its essence, an evolving storyline. To be sure, the adventures are made up, including the actions, reactions and interactions based on the player’s and the game moderator’s, and any other involved RPGer’s imagination, all within the rules of the game. But isn’t that the essence of what writing fiction is?

One step beyond being a player (or participant) in an RPG is being a game moderator or game master (GM). Not only must the GM play the part of multiple non player characters (NPCs), including their interactions, personalities, goals, among other things, but it is the GM who constructs the world in which the participants play. How grand and detailed the world is can vary greatly, but the process has many elements in common with writing a novel.

Created worlds include social structures, including governments, laws, socio-economic structures, social norms and taboos, competing cultures and subcultures, histories, technology, even varying races, religious beliefs and languages. In an RPG, much of the world is developed over time, and often only surface elements are scratched and understood, just as in a novel, where 90% of the history and foundation of a created world or universe is never directly observed, or even recognized, by the reader. But still, it is there.

To be sure, the breadth and depth of creation of a world contained within a novel varies depending on the setting and genre. A modern murder mystery would require less creating than a military science fiction novel set five-hundred years in the future.

Even so, a GM, like a writer, must keep track of all the moving parts. What ripple effect would the assassination of a loved and respected prime mister, or a severe drought in a vital food-supplying region have upon the immediate and surrounding societies, from powerful leaders down to the lowest of beggars?

Thus, not only would an experienced GM have a background in creating variety of believable characters, but he would also have practice in creating believable societies, nations, worlds and even universes within the pages of a novel.

Beyond that, over time a GM becomes adept at description. Sights, sounds, smells, touch and occasionally taste are important. Just as players in an RPG must understand their surroundings and environment, the same must occur for the reader while drawing from the words on the page. An advantage a GM has over the average novelist is that players provide instant feedback, often through looks of confusion, immediate questions, or nods of understanding. Because of this, the ‘description’ learning curve can be shortened if a writer has GM experience.

Last, pacing is both important in an adventure created by a GM and also throughout the storyline of a short story or novel. The main difference is that in an RPG adventure, players have greater influence than do characters in a novel, where the writer has complete control. Still, like cross-training, skill in one lends itself to improved ability in the other.

So, while being an avid RPGer and/or an effective GM doesn’t guarantee the successful jump to writing fiction, it does enable the gamer to bring a familiar set of tools to the task.

Terry W. Ervin II is the author of The First Civilization’s Legacy series.  To date, the series includes the novels Flank Hawk and Blood Sword. To learn more about Terry and his work, visit his blog, Up Around the Corner, as well as his writing site.

Aderyn Wood, thanks for reading. NO I did not know that about the Brontes.

Thanks, an interesting read. Did you know that the Brontes did essentially the same thing? They role played an invented world called Angria, and this provided much stimulation for their novels.

There are a lot of folks out there like you, William 🙂

Great Caesar’s Ghost! This pretty much sums me up as well! It’s absolutely GREAT to know I’m not the only one who did this, and still does.

Other than the fun and enjoyment, Sparkie? 😉

Phil the Drill, good to know I’m not totally off base on my view. Thanks for reading and commenting.

One of my favorite writers, Steve Erikson, built his Malazan world out of playing RPGs when he was younger.  I totally agree that RPgs can help your writing, organizing, and visualizing a lot.  Good job!

Great article, Terry!  Perhaps all the hours I’ve spent gaming haven’t been a total waste after all 😉

Fantastic read! I used to run a play by email rpg specifically to improve my writing skills. The game ran for 10 years and I was very blessed to have learned and grown from some truly fantastic and creative writers during that time.
Not a waste of time at all when you look at rpgs from various perspectives. I wanted to improve my writing, sure! but the goal behind the rpg was to test my theories about what it took to run a good game that people would stick around for.
The answer:
Rich character development: It doesn’t matter if your character starts as a farm hand or some prissy princess.
Balanced characters: No one likes to play with a Mary Sue anymore than they like reading about it. Gained strength over time is one thing, but a 14 year old master of everything and no weaknesses is just insulting.
Shared space and interactions: No one likes a stage hog. As a DM I needed to give each character a chance to take center stage. Overtime, you learn which characters will assume leadership roles, and which prefer support roles. It’s a part of the character’s personality.
Surprisingly enough, quality of writing wasn’t a major factor behind what made a good rpg, but it did affect the response rate/time. I’d look forward to the posts that were well written and be genuinely sad when there wasn’t more to read, but those would be the ones I would respond to first.
Don’t get me wrong, i did get well written piles of fluff that didn’t add anything to the characters or the plot with the exception of making the poster’s character seem all levels of awesome. Those 10 page long posts, often got shelved to be responded to last.
For me the ‘quality’ was in if the post contributed something to the plot and character while involving/inviting other characters to react or take part in the thread.
My two cents have gone on long enough.