This article is by Janet Forbes. 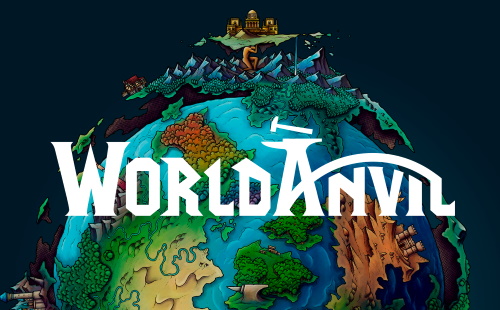 World Anvil came on the scene just 2 years ago, and sky-rocketed to success. They now boast the most complete suite of worldbuilding features out there with over half a million users onboard, including famous authors like Brian McClellan and Chris Fox, along with several publishing houses and universities.

But where did World Anvil come from? Janet Forbes (a.k.a. J.D. Blythe), World Anvil’s director and co-founder, explains.

At its essence, World Anvil’s story is really a love story. It’s a story about a husband helping his wife succeed. About two geeks who love worldbuilding. And how over half a million people got together to create a community around a worldbuilding platform that changed some lives.

I’ve always loved writing, but I can’t even count how many writing projects I’d left half-finished before I figured out the problem: worldbuilding. I write epic fantasy. I love to create big, sprawling worlds, but I’d lose track of those worlds before I’d finished the first draft of a novel. The devil’s in the details, and when those details are scrawled across a napkin scrunched up in the bottom of your handbag? It suffices to say, I wasn’t making much progress.

I chatted about this with my husband (expert coder, pro-designer, and my biggest fan), Dimitris, and he said, “Let me make you something that will help…”

And World Anvil was born.

Dimitris coded for two months solid, including straight through our summer holiday at his parent’s caravan in Greece. I swear I saw smoke coming up from his fingers at one point. By October 25th 2017, we had something we were ready to launch – the World Anvil closed beta. It was designed to help me develop and track the worlds behind my books. An extension was made for him and his friends create their tabletop RPG worlds. Consulting archaeologists, anthropologists, geologists and linguists (i.e. my family) for the details, we created some templates with relevant worldbuilding prompts to help with white-page syndrome. And with very little ceremony, we launched World Anvil as a closed beta – you know, just to see what would happen.

We were suddenly inundated with requests to join World Anvil’s closed beta. We had hundreds of users, worldbuilders who, like us, had struggled to organise their worldbuilding. We started our World Anvil Discord server, and had a little family of keen worldbuilders. We made friends and called each other from across the world to talk about fantasy species and space marines. We were a tight-knit bunch, and we had fun. A month later we decided to start a worldbuilding challenge to have fun – it was so popular we went from closed beta to open beta because we couldn’t keep up with handing out invitations by hand. That was our first of many worldbuilding challenges – WorldEmber – which we still run every December. People were inspired, and we were inspired. It was good times.

And then an innocent little fan post came out on Tumblr, and World Anvil exploded again. Thousands suddenly became tens of thousands overnight. We were across town when the post was released (and instantly went viral), having Dimitris’s birthday dinner with our friends and their two little boys. Our phones lit up so much that mine got hot and shut down. We left before dessert and raced across London to keep up with the in-flow. I guess that was when we first realised that we were onto something big.

We had no idea. Since then, it’s been a rollercoaster of 16 hour days, sleepless nights, podcast interview demands and streams at 2am. I quit my job as an opera singer to manage World Anvil full-full time, and things got even more intense. We’ve had calls from our childhood heroes. There’s been a documentary made about us and our story. We have high-profile professionals and businesses using World Anvil, both publicly and privately – it’s basically a dream come true to know that our platform can help people at that level too – and we’ve even won a Gold Ennie Award, which is like the Oscars for the Tabletop Roleplaying Games world. We could never have imagined that things would come so far, so fast – that so many people, like us, loved worldbuilding and finally needed a good solution to keep track of it long term!

And the rest is history…

Dimitris and I work really hard, and World Anvil has continued to grow and develop at an extraordinary rate. The platform itself has improved exponentially, thanks to the amazing suggestions and support of our community, Dimitris’s hard work, and a lot of late night sessions discussing workflows and new features when we should have been sleeping. World Anvil has fully interlinking articles, a full calendar suite, timelines, interactive maps – basically, whatever you need to worldbuild. We also have a full campaign manager for fans of Dungeons and Dragons and other Tabletop Roleplaying Games, to prep, play and track games.

As for what’s coming, we have a bunch of new things in the pipeline including family trees, probably our most requested feature of 2019. Most importantly (for me!) the second quarter of 2020 marks the release of a new interface designed specifically for novelists and I cannot freaking wait!

But despite all the accolades and success World Anvil has gained, it’s always been the community – their inspiration, their progress  – which has driven us. Novels have been written which would have been unwritten (including, finally, a few of my own!). Projects have gained fans, writers have found readers, and creative Kickstarters have seen massive success thanks in part to World Anvil. And it’s especially the human stories that’ve hit me the most. Every day, I get personal messages from people who have come back from the brink, who’ve been told they can come off their depression medication, and who have found new purpose… all because of World Anvil – a crazy gift my husband gave to me, and a community project we built together.

You can try out World Anvil with a free account, and access all the features with a Guild Membership. World Anvil also has a Youtube channel and podcast with worldbuilding tutorials and regular guest interviews. You can find Janet at @JD_Blythe on Twitter, or email her at [email protected].