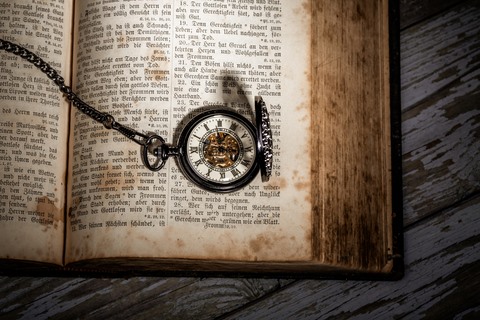 This article is by Jaiden M. Pierson.

As an author, one of the hardest tasks you must undertake is to put everything that is needed into a story, without putting any more than is needed.

Your readers have to put a lot more time and energy into your book than they would into a movie or television show. For that reason, most novels need to move relatively fast. Even if the novel is slow paced, it must at least be interesting from page one.

This is what makes backstory tricky. In most cases, it’s only a part of the main plotline in the loosest sense; it’s more of a prequel to your story than anything. But sometimes, you need it. Perhaps there’s a bit of information your reader needs to know about a character, in order to understand and sympathize with their actions. Perhaps there’s a bit of atmosphere a proper backstory can loan your main plotline.

But when you spend too much time on it, it can ruin the momentum of the book. Your reader is traveling along the main plotline, when they’re suddenly asked to take a side trip. Spend too long on it, and the arch of the main story can lose its flow.

So what is the exact right amount? The truth is, it all depends.

It can sometimes just depend on the author. In “IT,” Stephen King offered backstory on virtually every character, even minor antagonists who spent very little time on the page outside of their backstory. Most authors could not get away with this, but Stephen King pulled it off masterfully. The book also deals with a lot of elements such as childhood, memories, and the past coming back to haunt us. Near constant backstory fit well into a story like this.

Consider how your story is being written and if backstory will interrupt it too much. You don’t want to interrupt flow, so consider putting in backstory when things have slowed down a bit. Insert it when the characters have reached a natural point to stop and reflect a bit.

How to Present It

This brings us to another point, in which you must decide how the backstory is presented. Do you use flashbacks, or does a character just explain things through dialogue? Or do you write a prologue?

If the backstory can be covered quick and cleanly, dialogue is sometimes the better option. If things need to be a bit more detailed… such as introducing atmosphere using events that transpired before the main plotline, you may have to use an entire flashback.

Then, there’s the question of should you cover the backstory at one time, or sprinkle it here and there. Typically, the larger a backstory you need to fit in, the more you want to spread it out. Offer small bits as they’re needed, and no more.

Some authors feel the best place to put these is just after a stopping point in the story, so that it doesn’t interrupt flow. Examples would include placing backstory bits at the beginning of a chapter, or arc.

So what is the answer? When backstory adds to your story, put it in. If it just slows down the pace without adding vital information, leave it out — no matter how much it hurts to cut it out.

As a reader, how do you prefer to encounter backstory?  As dialogue, flashbacks, prologues, or something else?

As a writer, what techniques do you use to convey backstory?

In general, do you feel that fantasy novels have too much backstory?  Or do you enjoy that aspect of the genre?

To be natural, backstory ought to be prompted by something in the present: I don’t think writers would get away with the Tolkienesque history dumps you find in LOTR. So a man unsheathes the sword that belonged to his father and fondly remembers the duelling lessons he had as a boy, or on returning to a place unvisited for a long time the person is prompted to remember a story he heard about the place. It is possible to weave these snippets in and for them to appear a natural extension of the present. Long prologues don’t hold my interest. A couple of lines, a snippet of a conversation or a verse of a poem are all that’s needed if at all. If you want to write a long prologue, call it Chapter One then bring the person up to date in Chapter Two ‘Several years later…’

This is not an easy answer and I suspect it depends on the story and the way in which it is written. Sometimes you just want to fly through the pages but other times you want to know more or need to know more because the story demands that you invest emotionally. I think backstory should stay out of action scenes but if the writer scatters it between scenes or drops a context-giving sentence here and there, even a paragraph or two, then it’s fine.

Personally, I don’t like a prologue. I’ve given it patience from time to time but it has rewarded me infrequently, and yet I know it can be important or even necessary to set the mood or fix a backdrop.

As for my own attempts, I try to spread it out with a paragraph or two. Sometimes it’s necessary to give more information, but I try to create some dialogue or some kind of action to distill it, or even an image of the setting or a sense of time so that I’m not guilty of info dumping, or at least not too obvious.

Better writers have a way of engrossing readers even when they unload massive amounts of info.

For juicy tidbits, I love to read chapter-opener paragraphs (ala Prince of Thorns). I write them in, too, but not to reveal backstory, more for theme and fun.

When I write backstory, I tend to lean on short flashback sequences, but I really hate to use that word, because I think it conjures images of something other than what I do. I like to keep flashbacks brief, pertaining to a specific topic, say, an item the character picks up and then a two-paragraph explanation of why it has meaning.

I try to find the most meaningful reasons to show the backstory, and anything that doesn’t support the main point i’m making gets cut. That helps when I use the backstory as a transition between two scenes.

In general, I skip long prologues. I never felt that I missed anything important by skipping a prologue.