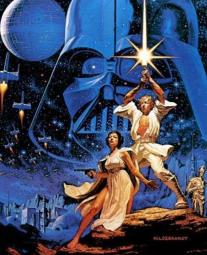 This article is by Sarah Hood.

I know what you’re thinking: “Great, another article about clichés.”

If what I’ve heard is true, that there are only seven basic plots, then every one of them is cliché by now. And even if there are more than seven, you’d have to be a lot smarter than me to think up a plot that’s completely original.

I used to drive myself halfway to the psychiatric ward trying to come up with something that’s never been done before. I couldn’t do it. Every time I’d brainstorm what I thought was a great idea, I’d find it on someone’s list of Twenty Clichés you Should Never Use. So I’d ditch the idea and try to think of something else. Over and over again.

Here’s the thing: this process of obsessive trial and error didn’t get me anywhere. It didn’t help me dream up some new and entirely untouched storyline. It threw me into a miserable state of writer’s block.

To be clear, I’m not encouraging you to copy from other writers or be careless in how you use clichés. But I’ve come to believe that it isn’t the plot itself that’s completely original. It’s your own unique take on it.

Don’t try to avoid clichés. Instead, dress them up, twist them around, and flip them upside down and inside out until they have become unrecognizable. Until they’re something only you could have created.

My main advice? Just have some fun and see how much you can transform those boring old clichés! Don’t let the fact that you’re using a cliché interfere with your creativity.

So what about you? How do you deal with clichés?

You are so right, you can’t possibly avoid cliches, only dress them up and maybe throw in a few twists.

Cool idea about customizing cliches – I always thought I had to use them exactly as they are originally worded, or else people would think I didn’t know how it was supposed to be said 🙂 Caring too much about what others think is never a good place to be in!

I view cliches as general story types … broad categories.  But I never feel limited by them because its the writer’s unique spin on the tale that makes it different and (hopefully) unique.  You can have a story about a bank heist – we all know it’s been done 10,000 times before – but the details and characters are different and reflect your own unique view of the world and the current times.  That’s why bank heist stories still hold our attention.  And, I think there must be many more than just 7 basic plot lines!

You know, one of my favorite twists to cliches is the blurring between the morals of good and bad. I often see this utilized in dramas, and it gets me obsessed with the characters. For instance, a woman of a poverty-stricken couple abuses her gravely ill husband, demanding a divorce and wanting to marry a rich husband. And then you realize she intends to siphon money from the rich man to pay for her husband’s medical bills.
It’s like you find the character obnoxious and revolting, but can’t help feeling sympathetic and supportive of the person at the same time.

It kind of pains me recalling how many of my ideas I have abandoned due to the overlapping with cliches… I have just brought some of them back to the table. Now I know what really makes a story fresh.

For me, a lot of it comes down to philosophy. I’m often uncomfortable with the implications behind fantasy tropes (to give an obvious one, what does “the rightful king” mean to a dedicated Socialist?), so I take other people’s stories, take apart the things I don’t like, and rebuild them according to my own desires. (Of course, since the works I’m referencing often don’t have an intentional moral to them, I do my best to keep my own ideas subtle, letting them underly the story rather than having them BE the story.)
P.S. I LOVE the heat/cold dynamic. It worked particularly well in Cryostasis.

Hi Sarah
Great post, thanks.
I coulnd’t agree more with your view on cliches. It’s not about the cliche itself but about how you tell it, and what you do with it that counts.
I also think that regardless of the story, you either care about the characters or you don’t. If you do, the plot can be recognisable and you will still buy into it, which is what makes it a good story. Going hand in hand with that is that once the characters become real and start guiding the story, you are steered away from the cliche because what is happening has an emotional foundation.
cheers
Mike

Great article. One of my favorite go to “cliche turned on its head” is presenting the protagonist and antagonist as the classic light/dark cliche, then as the story progresses start to slowly present to the reader that the bad guy isn’t a bad guy. He justifiably has his views. By the end, it’s more of a gray vs gray dynamic.

“she ends up saving their tails a time or two in the process.”
LOL! This is probably the best one ever. Love a little humor with the tension.
Great post. I think you may have inspired my muse…

One of the most memorable plays I remember from my high school drama days was a two character dialogue between a Mr. Black and a Mr. White,  both angels.  As I remember it, they both presented themselves as being the ‘good’ angel, with the right prescription for some crisis they were being called on to address.  The cool thing was that you kept being swayed back and forth as to who you believed in….who made the best case….it was obviously not going to be as simple as Black=Bad and White=Good.  To be honest I don’t remember which one it turned out to be, but it sure held your interest and took you for a ride.  I wish I could remember the name of that play.

Great example of twisting it:  I have a story where the “good” guys are really the bad guys.  All’s relative.  In trying to do the right thing, they perform the greatest massacre of all time, possibly assuring the very thing they were trying to prevent, because they thought it is right.  I won’t give any more details because I actually want to use that story one day…

When I realize that my writing is falling into “cliche territory,” I ask myself this: what is the most unexpected outcome?