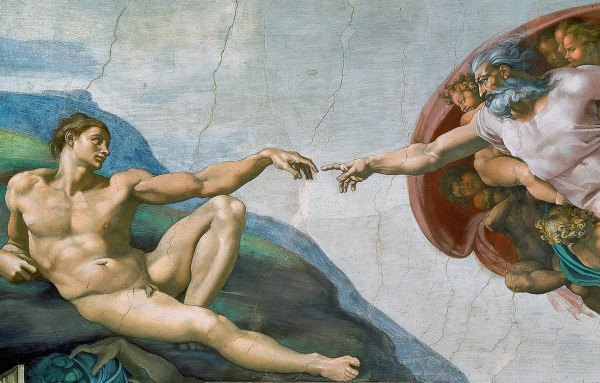 Browse any writing forum and you’ll notice a pervasive question manifested in a myriad of forms. How do I keep the reader engaged? What is the correct ratio of adverbs to words? What plot structure works best? When should I use passive writing? What should be the make up of my cast?

The kernel of such questions is: How do I write a story?

Writers set out to deconstruct the writing process and label each fragmented mechanism. They study each mechanism independently of the whole until they are certain of the concept. When all the pieces are scrutinized and tagged, they strive to push the pieces together hoping for a masterpiece. Frustration soon follows.

The story of man’s creation in the Judo-Christian-Islamic tradition follows the same pattern as our attempt to construct a story. Clay was gathered, shaped into the form of man, and nothing. Not until a soul was breathed into the collection of parts did the inanimate come to life.

And this is the truth of our creations. No amount of science can make the lifeless live. No formula exists to crack the code of imagination. Your story needs a soul, one as real and mysterious as the first to kindle life in the shaped clay.

The only real advice a writer should follow is to know that a story is the sum of its parts. Make sure all aspects live and your story will too.

What are these parts?

A story without characters is just a series of events. Very few readers, if any, will care about the timeline in your world. Readers need to feel that something is at stake, and characters are the connection. Just be sure to make each member of your cast a viable, independent character with their own consequences and aspirations. Unless, of course, you’ve consciously decided not to.

This is fantasy, after all. The world should breathe and move just as surely as your characters. Give thought to the world, make sure it adds immersion, that it adds tension and obstacles, no matter how subtle, and that it’s all plausible. Plausibility is directly equal to the amount of thought a writer has invested into worldbuilding.

Much like the secondary cast, the antagonists are often plot devices with a cape. Writers often make them caricatures of evil ideals rather than people in opposition to the protagonists. Nowhere has it been divinely or scientifically decreed that an antagonist is a soulless, mindless epithet bent on the destruction of all the protagonist holds dear. Make the antagonist as real as your protagonist. Give them plausible goals that fall within the spectrum of their experiences.

Prose is a servant to your story. Once your story is formed, alive, and set in motion, the prose will follow. There are standards that should be adhered to, unless you’ve consciously decided against them, but the nuances should adapt to your intent and not the other way around. Understand the mechanisms, but only put them together once you have a soul ready to instill in the collected parts.

The Soul of a Story

Don’t take my words as a stance against writing technique. As a longtime member of this site, I’ve seen the same questions asked, mostly by new members eager to create. I fear the enthusiasm that compels us to fill the screen with words often pushes us past the goal of our original intent. We are creating a story, an art form older than any other.

Just as in the living, no one can define the soul of a story. Some may attribute it to voice, theme, or moral parallelism. Whatever it is that sparks the life of a story, when that spark is absent from the pages, the story is left lifeless.

In your experience, which parts of a story are the most frequently neglected?

In your opinion, what is the soul of a story? What is necessary to spark the life of a story?

In your experience, which parts of a story are the most frequently neglected?
An editor reviewing submissions would know best but from writing groups, I’d say–risking a tautology–that the most frequently neglected part of a story is having a story. I think that “plot-driven” is an over-used, ill-defined, and dismissive criticism. A novel damn well has to have a plot because we know nothing about a character if they do nothing and nothing happens around them.

In your opinion, what is the soul of a story?
When you ask someone you meet, “what’s your story?” you’re asking for clues to their character. People select anecdotes that are not only interesting stories but also tell something about that person, their values, their bravery (or lack thereof,) and their interests. The same must happen when we tell a story that includes characters; it has to reflect upon those character’s… uh, character. 🙂

What is necessary to spark the life of a story?
No one thing but it has to be memorable or have some memorable scenes. To get registered in memory it has to spark emotion. Most stories I read and like boil down to posing “What’s inside the box?” and making me invested in that because the characters are invested in that. There are other things that trigger other readers but I think that’s it for me.

Thank you for your fine article. I like the break-down you did. It’s a good thing to keep in mind who is a major and who is a secondary character. I like the author’s Lincoln Child and Douglas Preston and how they–I’ll say, get away with–using detailed secondary characters yet keeping the main story going. I think it’s because they use those character’s close 3rd person views to get new perspectives on the main actors.

A novel is like a symphony. Is a french horn needed here or percussion? Eh… depends.

Character development, I believe, is the heart of any story and developing a good, solid world (world building) is the soul.

I have never thought of it this way, but we do tend to deconstruct our writing process and I think that is what makes us the way we are and what makes us so good at what we do.

I feel like when people write a story and leave details out of the main character’s life, it ruined it. Like even when you do reach that spark, you aren’t as invested in the character so it isn’t as big of a shock or surprise. So that being said, I believe the soul starts with proper story telling of the main character(s).

It’s true. No matter how we dress up a story, it doesn’t exist with characters. Readers have to feel something for the character, enough so that they’re invested in their fate.

The soul of a story is the magical thing… the connection it forms to the reader, which lets him experience what you write. Once you figure out the true purpose of your characters, I think the story will gel itself up and create its own soul.

Thank you for this wonderful article. I agree with you completely, because after a long time of reading those discussions in which people try to analyze and deconstruct the creative process of Storytelling like it was a science I have become very tired of them.

They are trying to find some formula for success, like the art of Storytelling was Chemistry or perhaps a Chess match… They think that imagining and telling stories is just a matter of analyzing this, and analyzing that and learning the theory and performing careful calculations… They make me so mad.

To me, Storytelling is a very enjoyable and extremely beautiful Art.

When you really get in contact with the soul of your story, a link is created between you and the story in question. It’s like dancing together, like falling in love… Stories are living creatures, and telling them is a sacred and spiritual experience.

What is necessary to spark the life and soul of a story?

This is quite inexplicable, but I view it this way: The story chooses the right storyteller and presents itself to him or her so both can work and dance together, so it’s like destiny.

I call this Sparks and Clicks, and probably you’ll be hearing more about this very soon.

I believe that the soul of a story is emotion. If a story makes you feel something, it will stick with you.

Where many stories fall flat is in failing to evoke emotions in the reader.