This article is by B.K. Bass, and is presented by Worldbuilding Magazine. 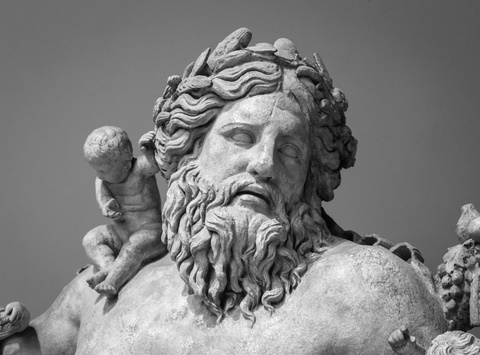 When we consider the history of world religions, certain images are bound to come to mind. Imposing Greek gods and heroes wrought in marble statues. Ancient Egyptian tomb walls covered with paintings of their deities. Along with these representations are the many totems, trinkets, and baubles that may grace either the neck of the devout, or a small shrine in their home. When we visit a gallery or museum in the Western world, or peruse almost any publication on the subject, we are often greeted with images from the Renaissance of figures from the Christian faith. Even today, many homes host icons of one god or another, and some people wear jewelry proclaiming an allegiance to their faith. Even for those of us who chose not to follow one of these traditions, it is undeniable that their presence not only fills our history books, but also permeates our modern world.

Looking at artwork intended to represent a people’s theology isn’t limited to places of worship. From civic projects to an idol in one’s pocket, the presence of the divine was often kept close to the people. There could be many reasons for this phenomena, and exploring them all has already filled volumes. In its simplest form though, the act of creating artwork to represent one’s beliefs is a way of taking an abstract concept and making it feel more real. One can describe Zeus upon his throne on Olympus, but actually standing before a statue of him carries more gravitas than a thousand words. For both those who believed and those who wished to convince others to believe, rendering something that is unseen and unseeable into physical form was—and still is—a powerful tool. Throughout history, the gods have resided among mortals in the form of artwork.

It’s hard to say how humans first depicted religious figures. Some of the oldest recorded art comes from the Indonesian cave paintings created approximately 40,000 years ago, whose true meanings we can only infer. Among the oldest recognized religious artworks is the Venus of Willendorf. Dated between 28,000 and 25,000 BCE, it is named after the region in which it was discovered: Willendorf, Austria.

However, the statue was made of oolite limestone, a material not native to the region where it was found. This suggests that it travelled to Austria from some other land, and one might presume it was perhaps even traded among cultures. It is one of forty similar and intact figures from the era with another eighty that exist in fragments. We have no way of knowing for certain the meaning or purpose of the small, handheld figure, but many assume she represents a fertility goddess due to the figure’s exaggerated breasts and belly showing typical traits of pregnancy.1

It was a widespread phenomenon for cultures to venerate a fertility goddess—or an idea of the mother as divine—for millennium after the Venus of Willendorf was made. As late as 2,000 BCE, cultures from the Indus Valley to Scotland left evidence that their religions focused on a devotion to such figures. Many different symbols have dotted the landscape of these beliefs, including pregnant women, the moon, snakes, and eggs. These symbols have been found on pottery, idols, and in architecture. However, the unifying themes of birth, death, and rebirth are almost universal among them.2

To Warrior Kings and Wise Women

Around 2,000 BCE, we see a decline of Earth Mother and nature religions accompanied by the rise of classic polytheism. Gone are the primordial egg and pocket-sized statues of pregnant women, replaced by pottery, frescoes, and towering edifices adorned with warrior gods and kings. No matter the culture of the period, a defining characteristic of the time was organized religion with an absence of documentation. There were no holy texts, nor could much of the populace read them if they had existed. Instead, tales spread through word of mouth while every aspect of life was decorated with images of the gods. Even at home, paintings adorned the walls and deities graced the surfaces of pottery and other everyday implements.

The gods lived among the people through these representations. As their likenesses were recreated, a mostly illiterate populace obtained a consistent worldview through these shared artistic trends.3

In addition to being found in temples and homes, some representations of the gods endowed early governments with the legitimacy of the divine. Considered by many to be the first example of a written code of laws, the Code of Hammurabi (circa 1,780 BCE) can be found engraved upon the seven-foot tall Stele of Hammurabi. The stele’s top depicts an image of the sun god Shamash presenting Hammurabi with the code of laws, solidifying the divine right of the king to then decree these laws to the people.4

While much of the ancient and classical world was dominated by the likes of Shamash, Zeus, and Thoth, the importance of women in religion continued after the decline of the Earth Mother. Many important divine figures in ancient times were women, and they held prominent roles as embodiments of fertility, the harvest, the home, and wisdom, among others. Even victory over one’s foes has been represented by female deities, best exemplified by the statue of Athena Parthenos in Athens, Greece.

This monument was completed c. 438 BCE as part of the Parthenon temple complex in celebration of the unified Greek victory over the Persians. The 11.5-meter tall statue of the goddess was a testament to this victory as lead by the city-state of Athens.5

Images of divine figures could be found everywhere in the ancient and classical world. The examples we’ve seen include a pocket-sized idol, household pottery, a code of laws, and even a colossal statue surrounded by an imposing edifice. Look around today, and I’m sure you’ll see modern examples of the gods walking among us. From necklaces with Thor’s hammer to a Christian’s crucifix, many of us still bear our faith on our person.

For the purposes of our worldbuilding, remember that the gods do not exist solely in their ivory towers or within the walls of temples. People from all cultures throughout history surrounded themselves with depictions of their faith—and continue to do so today. The span of intended impact and patronage across these depictions is as broad as any form of art could be. Considering these elements can help add realism to your own depiction. Why was the art created? For what audience? And what is the intended impression? Also, who declared that such an effigy should be created? Look at any courthouse around the world and you may see a statue of Iustitia, the Roman goddess of justice, declaring the intent of the building for all to see. In this regard, we have a religious figure used with an entirely secular purpose. Although this example uses a figure not considered divine by the culture applying it, it is still a wonderful example of the power these symbols hold. A government may use their culture’s own theological figures in a similar way, perhaps adorning the columns of the town gibbet with representations of some god of revenge.

Don’t stop with the temple and the town square, though. Next time you’re describing a piece of pottery, the wall of a home, or some jewelry, you may want to describe the image of one of your world’s deities. Faith is a personal experience, and many choose to keep their gods close to them at all times. While the god of revenge might grace the town gibbet, a goddess of the hearth, peace, fertility, or family bonds might grace the mantle of a fireplace. Perhaps a blessing on the home itself is rendered in a carving above the front door. Everything from a simple clay figure to an entire shrine may also act as the family’s personal place of worship.

Many of us put a lot of work into the theological aspect of our worlds. Conveying these details to our audience often falls victim to the dreaded info-dump, an oft-maligned practice when a writer inundates the audience with exposition that does not have immediate correlation with the core story. Through artwork, however, we can show some of these myths, legends, and religions in subtler ways. More importantly, we can show how the beliefs of our people become part of their everyday lives. 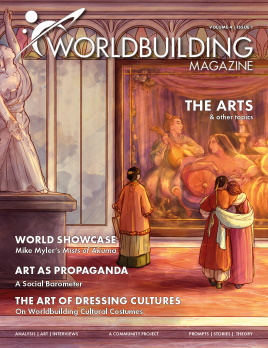 Worldbuilding Magazine is a bi-monthly publication which covers a variety of worldbuilding topics. This article was featured in their February release: The Arts. You can visit their website to read full issues and subscribe for free here. Make sure to join their Discord or follow them on Twitter for the latest news. Mythic Scribes is a proud partner of Worldbuilding Magazine.

B.K. Bass is an author of science fiction, fantasy, and horror inspired by the pulp fiction magazines of the early 20th century and classic speculative fiction. He is a student of history with a particular focus on the ancient, classical, and medieval eras. He has a lifetime of experience with a specialization in business management and human relations and served in the U.S. Army. B.K. is also Editor-in-Chief of Kyanite Publishing and the Kyanite Press journal of speculative fiction, and the Writing Department Chair for Worldbuilding Magazine.

You can learn more about B.K. Bass at his website.