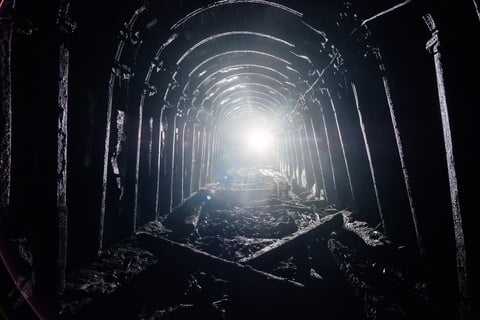 This article continues the topic of medieval miners and mining. Here’s a link to part 1, which talks about medieval theories of how gold and other metals are formed.

Once a vein has been discovered, the challenge is to get the stuff out of the ground. From earliest times, people have done both open-pit and tunnel mining, depending on the nature of the ground. Each has its challenges. 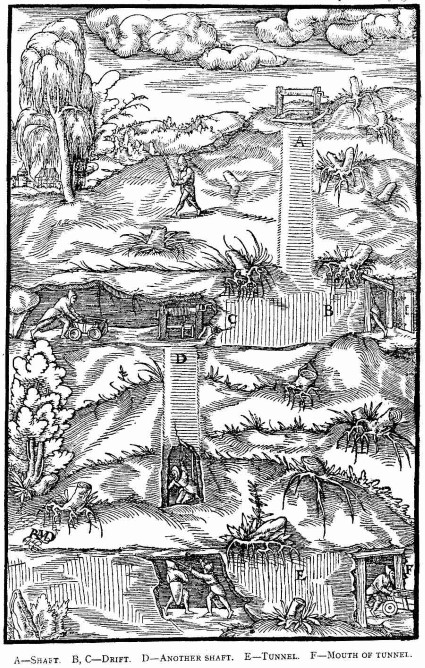 You might be surprised (I was) to learn that pneumatic mining has existed for a long time. Pliny the Elder tells how miners would build a reservoir at the top of a hill that was believed to contain valuable ore. Once filled with water, the gates were opened and the sudden rush of water tore away the topsoil to reveal what lay beneath. The process is called hushing. This had the advantage of being able to be done multiple times and digging quite deeply. 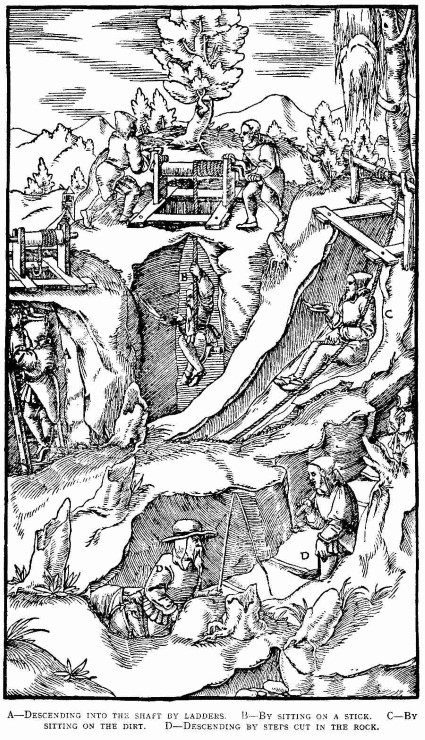 This somewhat alarming technique involved setting a fire against the rock face in a mine. This required piling up plenty of wood so as to generate as much heat as possible. A brave soul or two would then pour water or vinegar on the heated surface, causing the rock to crack and crumble. As you might imagine, between poisonous vapors and sudden collapse of the tunnel, this was a dangerous operation. 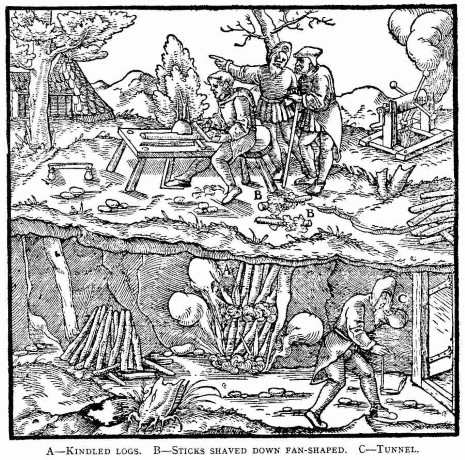 This technique was still used in the Middle Ages, but most of the work was done by pick and shovel. Big advancements were in ancillary areas, such as using pumps to bring fresh air into deep mines, and other pumps to drain water from mine shafts (adits). Besides a collapse, water was the big enemy in mining. A vein might run into a water table. Besides the danger of immediate flood, there was the difficulties presented by seepage that caused illness in the miners, made supports unstable, and could damage to tools and machines. In general and at best, mines went down no further than about two hundred feet until the very late Middle Ages. The biggest advance was in techniques for removing water. 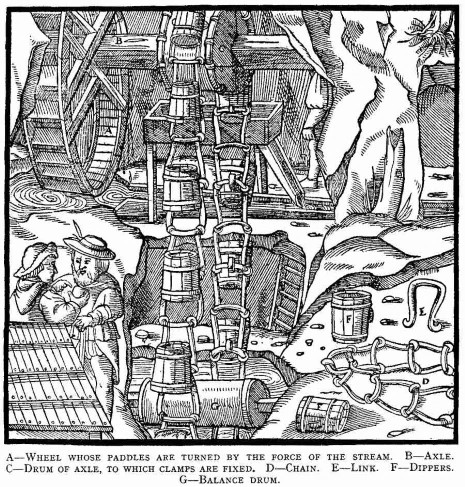 OK, we have the ore back up on the surface. But we still don’t have lead or tin or copper, we just have a big pile of rocks. Next we have to separate the valuable stuff from the worthless. In a word, refining.

This was a more complex process that you might guess. Three main processes were used. One, the chunks get broken down by brute force, with hammers in containers in various configurations. Two, the material is treated with fire, which breaks down the raw material even further. More accurately, it weakens the rocks to all further crushing. The aim was to get wheelbarrows full of rocks and earth down to sand and powder, removing the dross as much as possible. These steps, while often carried out by unskilled labor, were done under the supervision of experienced pros.

But miners knew all sorts of impurities were bound to the more valuable metals. Washing helped (think placer mining), but they also used various chemical processes. Here again there was a need for specialists. There were not yet schools of mining; the knowledge was all passed down from generation to generation.

Once the silver or gold had been refined, there came perhaps the most important step of all: determining its purity, which is called assaying. The assayer had to be of unimpeachable integrity; the temptation to skim or lie must have been strong. His methods had to be both reliable and consistent. The reputation of the mine and its owners depended on this.

As you can see from the foregoing, mining was expensive and intensive. Anywhere there was a substantial mining operation, a community formed. It consisted not only of the miners themselves but also of those engaged in refining and shipping, as well as support activities like cooking, washing, carpenters and smiths, one or more doctors, and taverns. Yea taverns! That’s where you’ll find the doctor.

Add to the workers, the managers. Someone is directing the operation, choosing the direction of digs, overseeing matters such as adits or pumping. Craftsmen specializing in the construction of specialized equipment. There would be accountants and paymasters, and someone in charge of it all, who would report back to the noble landlord or merchant prince who owned the whole shebang.

So, we have a lot to work with here. A fantasy mine might require the presence of specialist mages at just about every step, from prospecting through refining. I sort of like the idea of a wizard being employed in dull work like providing fresh air to a deep mine. Or in assaying, with the wizard using magical power to detect the presence of magical substance.

A mine might blow up in magical ways. A mage might be needed to deal with dangerous gems or metals (or gasses, I suppose). There would always be the danger of breaking into a den of kobolds or some other dangerous catastrophe.

Magical tools for might be required mining, or magical elements for refining. All along those vectors, lots of opportunities for theft, deception, or other conflict.

A mine might be entirely run by dwarves, or they might serve as the specialists in partnership with humans or others. This could provide opportunities for conflict between groups. It’s worth noting that historically, slaves and prisoners of war were often used in mines. There could be a story angle there.

Beyond that, a mining community provides a great and under-used setting for a fantasy story. Here we have residents who are fairly isolated from the rest of the world, with large sums of money passing in and out. Plus, there are plenty of real-world examples on which to draw, from the silver mines of Potosí, to the gold rush towns of California or the Yukon, to the diamond and emerald mines of the modern world.

The one great resource is Georg Agricola’s De Re Metallica. This is still available in print, but one translation is available online. All the illustrations in these two essays are from that work.

Fun fact: this translation was done by Herbert Hoover, back before he became president. And no, the band did not take its name from the book.

In addition, here’s the link from last time:

Very helpful, thanks!! I am writing historical fiction and I agree, a mine is an underused setting with great story potential.

A nice overview. One interesting story I once heard (but can't find a reference to anymore) about refining is about aluminium. It used to be very expensive (as in a lot more expensive than gold) to refine aluminium ore. When the US was building the capitol they considered creating the dome out of aluminium, to show the world how prosperous and advanced they were.

In the end they decided against doing so. Which might have been a good thing, since a few years later, someone discovered a process which made it so cheap to extract aluminium from ore that we now use it to wrap food in it.