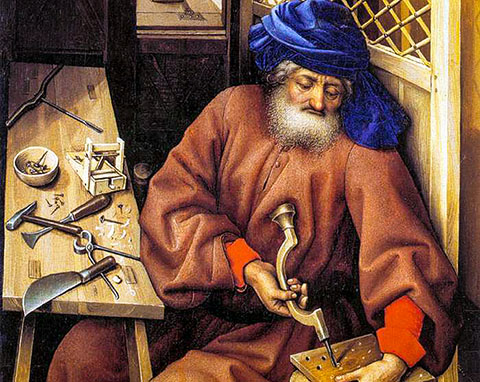 Carpentry probably doesn’t sound like a subject with much potential for writing fantasy, and I’ll admit the scope is restricted. But sometimes authors want a modest touch for effect, to add depth to the great epic they’ve undertaken.

Five types of woodworking industries can be named, from the late Middle Ages: sawyers, carvers, turners, carpenters, and joiners. Sawyers converted raw logs into planks in their sawmills (powered by wind or water or even by animals) and stockpiled them in lumber yards. It was the sawyers who were the main importers of wood into a city. Carvers made a wide variety of objects, from wooden utensils to decorative work. Turners made whatever required lathe-work: chairs, tables, stools. Carpenters performed “roughing”; that is, framing, floors, foundations, walls. There’s not room here to cover all these, so I offer two: carpenters and joiners.

This word has an interesting background. The English comes from the French, carpentier, which really means someone who makes wagons and carts. Even our word “car” comes from the same root. The older English word for working with wood generically is “tree-wright” which is a great term I sort of wish was still used. But in the fine tradition of modern English, our word carpenter is also colored by Zimmerman. That German word carries the meaning we use, of someone who works with larger and heavier pieces of wood, specifically in constructing buildings. So, “carpenter” is something of a stew.

Carpenters were hired as contractors for a job. Typically, the contract was with a master carpenter, who would in turn hire a crew to do the project—very much like it is still done today. If there was a dispute, it would be brought before the city council, which had special committees to hear guild complaints. You can see how important it would be for a guild to have representation on the city council.

Out in the countryside, carpentry was rare. Peasants tended to construct their own buildings, often as a communal project (think barn raisings in 19th century America). Knowledge of how to build was preserved as traditional knowledge, which tended to make peasants resistant to change. If skilled craftsmen were brought in, it would usually be done by a local lord, who had connections and money.

It’s worth mentioning, too, that carpenters can be found in places you might not think of. They built castles–castles before about 1000AD were all made of wood, but even once stone castles dominated, wood made up important parts such as roofs and flooring. The same applies to other big buildings such as a guild hall or a cathedral.

Ships are another place you’d be likely to find a carpenter, not only in construction but on board as well.

A joiner is a woodworker who does not use nails. That is, he makes mortice and tenon, dovetail and other type of joints (hence the name) and also works with glue.

His specialty is making fine woodwork such as armoires, desks, cabinets, beds, windows, staircases, pews, chests, and even picture frames. His customers were the wealthy, and his work was admired for its beauty and craftsmanship. He did bespoke work, working on contract. Sometimes these contracts were with the city itself, or a bishop or monastery, or some nobleman.

A joiner worked in one of two places: either in his shop, or out on a construction site. For this latter, the joiner might find he needed to hire additional help for the duration of the job. The shop itself might have journeyman workers, but they might or might not be available to take on outside work.

Journeyman joiners traveled, but they had a special arrangement. Where other journeymen relied on references to move from one job to another, one place to another, in a larger city one could find a Herberg, which was a kind of hostel for journeymen. It might be a large private home belonging to one of the masters, or it might be an inn leased by the guild itself. Here journeymen could sleep and eat, but more importantly they came to the Herberg for work. The journeymen reported to the “placement master” (Zuschickmeister), who posted a list of openings each week. No journeyman was allowed to seek work, and no master was to seek a worker, except through the placement master. The Herberg thus provided a central labor pool to meet the fluctuating demands of the craft. This practice was common throughout the construction trades.

Socially a Joiner benefited from working for the upper classes. He was never himself upper class, but an appreciative patrician could see to it that the Joiner’s son received an education, for example, or apprenticeship with a merchant.

About Social Status and Crafts

These comments apply to all guilds, not just to wood workers.

Not all guilds had equal standing in a town. The social standing of any particular guild (and its members) depended on a variety of factors, but I can give you a couple of rules of thumb (not to be confused with the Rule of Thumbs).

One, there were trades that were simply not respectable. These had certain characteristics that prevented them from being accepted into the mainstream of society. One group was trades associated with death, such as gravediggers and executioners. A second group included vagrant or itinerant trades such as shepherds, peddlers, tinkers. “Dirty” groups were another: street sweepers, charcoal burners, rag collectors. In many towns, such occupations were not even allowed to form a guild.

Two, and this is related to the first point, the status of a craft was very much associated with the status of the customer. So, for example, goldsmiths and silversmiths were of high status not merely because of the skill involved or the value of the merchandise, but because they dealt with the upper crust of society. This is one reason why joiners were usually of higher standing than were carpenters, even though they both worked with wood.

What Do You Think?

I can see a joiner being used in a magical capacity. He could be able to create magic boxes, puzzle boxes, and especially subtle wooden locks. He could work with magical woods and glues. I do make use of this, somewhat. In my world, gnomes are especially gifted at joinery. They make cabinets, chests, and so on, of wonderful design. A few of them can make things that ordinary humans would regard as magical, though I’m leaving the true status ambiguous. In your world, you might even make “joining” be something more than just joining together pieces of wood.

The Herberg offers possibilities, as well, and not only for joiners. Such a place could serve as a clearing house for all kinds of small-scale magical jobs, almost like the role played by the traditional D&D tavern. Gossip would concentrate here, news from elsewhere, simmering rivalries, and so on.

What about you? Do you see potential in this somewhat obscure trade?

I know a bit about joiners because they were part of my dissertation research. But because it was a dissertation, I know a lot about a little; namely, the joiners of the city of Augsburg around the year 1600. So anything you can add, from France or Italy or wherever, is much appreciated!

Medieval carpentry fascinates historians and re-creationists alike, so pictures are plentiful. These resources show only a tiny selection.