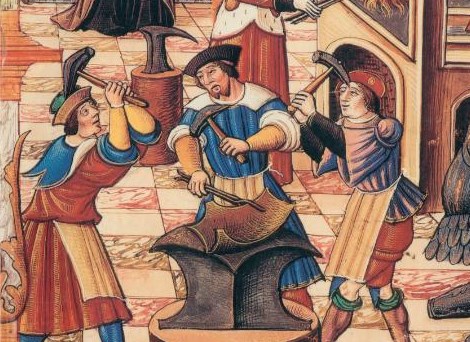 Guilds have long been a popular device in fantasy writing. They are used all the time in gaming, where they serve as a place for the player to get missions and rewards. These guilds bear little resemblance to historical guilds, and that’s fine. But can historical guilds provide writers with useful details?

I think they can.

A bit of context, first. This essay is specifically about craft guilds. I’ll post another that concerns mercantile guilds, a rather different sort of organization. Though they have some points in common, a merchant guild offers some different avenues to explore.

The word guild covers a wide range of organizations, and of course there were different words in different languages, some of which are perhaps better translated as “association” or “brotherhood” (Zunft, compagnie). There were guilds that were little more than drinking clubs. But we’ll stick with the mainstream for now, the guild centered on a particular economic activity.

Also, guilds don’t really appear until the 12th century or so. Guilds were not a part of early medieval society. No Viking guilds. No Carolingian guilds.

Despite a wide diversity, there are a few characteristics common to most guilds. Guilds had rules. These were written down, filed with the City Council, and backed up by public authority. Some of these guild charters were few and general while some were extremely detailed, covering every aspect of a guild member’s life. There’s no rule of thumb here, so you can make your guild as rule-bound as you like. But all guilds have rules; we have copies of guild regulations from all over Europe, though nothing earlier than the 13th century.

Guilds were almost exclusively urban. There were a few rural guilds, like in southwest Germany, but these were unusual and all were late medieval or later, so we’ll just say guilds are in cities, not in the countryside. In fact, urban guilds tended to try to extend their reach into the countryside.

Guilds had an economic aspect, of course. They usually (though not always) enforced a monopoly of their craft within the city walls. In Augsburg, for example, only members of the shoemakers guild could make new shoes. Cobblers were allowed only to repair shoes. Cobblers didn’t have a guild, and many came from the surrounding villages to set up stalls in a market and do shoe repair, or else people from the town went out to the village to have their shoes repaired. But if you wanted new shoes, you went to a shoemaker who was a member of the guild. As you might guess, there were endless squabbles between these two groups.

Guilds didn’t regulate prices, at least not until very late in the Middle Ages and never successfully. What they did regulate was quality, which is an indirect way of controlling prices. In all kinds of trades guild rules set out what kind of materials, what kind of tools could be used, even from whom you could buy and to whom you could sell. Guilds had inspectors who checked this, and they could impose fines for violations.

Guilds had a social aspect. Many, though not all, had a guild hall, or at least a favorite tavern where members could gather. The regular contact between masters inevitably meant everyone knew everyone else’s business. The guild also participated in the public life of the city, taking on civic duties as a guild (e.g., fire duty or repair of walls) and participating in civic processions. In times of financial crisis, guilds could be tapped for “contributions.” In short, guilds were members of the civil society.

In some cities, guilds had a political aspect. A guild might have a seat on the City Council. More often, a guild represented multiple trades—some not at all closely related—which tended to increase their political clout. Membership in a guild was sometimes a prerequisite for citizenship in that town (citizenship in a nation pretty much didn’t exist in the Middle Ages).

Guilds also had a religious role. They marched in religious processions. They financed chapels and helped decorate cathedrals. These functions were hugely important in relieving some of the financial burden of building and maintaining a cathedral or church. For the guild, this work was not only pious, it was civic—the grander the churches, the grander the town’s reputation.

Guilds were not associations of workers. They are not medieval versions of unions, nor the predecessors of unions. Guilds were associations of masters; that is, of small business owners. The fact that the owner also worked on the shop floor is beside the point. Guilds were about the owners. The workers were the journeymen; these were the employees. We can see this in the numerous journeymen strikes of the 16th and 17th centuries. Owners don’t go on strike.

The first thing that comes to mind for me is all the fantasy guilds that to me just don’t work as guilds. I don’t buy an assassins guild, a thieves guild, a fighters guild. It doesn’t make sense. A gang, a secret society, a professional association, sure. But not a gang. I could play it for laughs, with the guild regulating what kinds of kills the assassins could make, worrying about quality and reputation. Submitting the masterpiece could be hysterical.

The second thing that comes to mind is that few make guilds for non-human characters, and I think there’s a lot of potential there. Would a guild encompass gnomes as well as dwarves and elves? In a given city would there be the elf carpenters guild and the human carpenters guild? Gnome silversmiths competing with dwarf silversmiths?

Fantasy stories can also be about specialists, though: alchemists come most readily to mind, and an apothecary guild might provide a useful historical analogue. In general I see magicians being more freelancers or monastic types, but I can also envision a mages guild that tightly regulated matters such as what kind of spells could be cast. Remember, a (historical) guild is very much about preserving reputation.

There’s potential drama in the circumstances of the journeyman; especially in the late Middle Ages, entry into mastership was increasingly restricted, and the tension between a thirty-year-old journeyman who long since should have got his own shop, and the guild of masters who close him out, could provide some conflict. There were even strikes (there was one among shoemaker journeymen in Germany in the early 1700s). I wonder what would happen if all the sorcerer apprentices went on strike.

Women were rare in guilds, though it could happen. A widow could also run her husband’s shop, though again this was rare. But certainly a story or two could be found in there somewhere. Why is it that wizards are never married? A woman taking over her husband’s alchemy shop could be interesting.

What would happen if a guild went bad? Infiltrated by evil elves, for example. It wouldn’t even have to be a magical guild, just one with political clout. That could set up some drama within a city.

I have to repeat, except for maybe a short story about some individual experience, this is all a bit thin for producing epic fantasy, at least in the foreground. But it could work as a minor plot line.

Here are some additional resources on this topic:

Seventy-four guilds are listed. Notice how certain trades are lumped together; that was typical. Halsall *always* cites his sources. This one is Roy C. Cave & Herbert H. Coulson, eds., A Source Book for Medieval Economic History, which is a great resource for the topic.

A clear, well-written article about the city of York. With references.

What Do You Think?

Does any of this spark ideas in you?  Have you used craft guilds in any of your stories previously? I’d love to hear from you.

Some great information here. Thank you. I have written briefly about Guilds in one of my books, but they will feature a more prominent role in the current WIP, so this information will definitly help.

noob of the north

This was really interesting and made me look up the history of old guilds in my country. I was also inspired to invent a guild for my WIP; a group of storytellers who are very concerned with their reputation, heh, and I got a lot of new ideas from your article, making the guild a lot more fleshed out. Thank you for posting this, I loved it!

A fascinating overview, thanks. My co-author Gordon Faulkner has been world-building for a few decades and the result so far are two fantasy novels FLORESKAND: WINGS and FLORESKAND: KING, where gilds (sic) figure – and there are alchemists and sorcerers (no elves!).

“Gild” is okay. It’s an alternate spelling most often found in 19thc books. I used that spelling for quite a while in graduate school until my dissertation advisor more or less beat it out of me. 🙂