In our distant past, archery nearly became a lost art, a useless tool once weapons technology had moved on. If not for the resurgence of popularity in the early to mid-nineteenth century, it might have vanished in Europe and America entirely, being relegated to the more primitive cultures which rely on it as a means to procure food and make war.

But how best to portray archery in a world where magic is common and monsters are not mere wild animals, but horrific creatures bent on destruction?

First, what type of archery are you trying to portray? Fourteenth century longbows firing war arrows on a battlefield? A band of warriors decimating foot soldiers from horseback? A small group of characters hunting or sneaking through an occupied land? These scenarios all require different things, and their equipment will reflect their needs.

Longbows, in their most basic sense, are long sticks (some very long, about eight feet). They have no curvature when unstrung, and would be made of different types of wood regionally available. The best wood for the bow will be strong but flexible, and often it would be backed with linen, glued in layers to lend strength to the weapon. Strings, in wet climates, were almost exclusively made of linen or hemp, especially for war bows, as other materials could not stand up to a 150-pound pull.

So without getting into too many details, how does a longbow work? Traditional longbows are strung when use is eminent, and unstrung when no longer in use. Every time they are pulled, they weaken, but a good one can last years. I’ve seen bows break in half when drawn, and it’s truly frightening, a sound like when a tree is falling, the splintering of wood and then a sharp snap.

Longbows’ weights are varied, depending on their intended use. The 150-pound war bow shoots massive arrows, up to a yard long and tapered from 1/2” to 3/8”. It would have had an armor-piercing, pyramidal, hand-forged bodkin to pierce plate armor. These are atypical bows and took many years to master. In fact, the skeletons of archers are easily identified by their curved spines, a side-effect of the muscles compensating for repeating this action throughout their lives.

While that’s all well and good for an army defending a castle against knights, it’s ridiculous to think a hunter would sport that sort of equipment. He’d most likely be shooting a six-foot bow between 45 and 70 pounds, because anything more than that is hard to draw and hold as you aim. Most human characters will typically fall in this range, because even a 45-pound bow is hard to simply pick up and pull more than a few times if your muscles are not used to doing it.

Mounted archery is a different subject altogether. Many Mongols had two rigid, hinge-top quivers strapped to their saddles, and would shoot short bows with deadly accuracy from horseback. While my research only breaks the surface in Asian archery, I think it’s worth mentioning here because it’s all too easy to confuse the two very different methods and equipment. Longbows from horseback is not likely.

And now on to crossbows. Crossbows are unique, in that they are very user friendly. You can put one into the hands of a peasant and say, “Shoot those men over there,” and essentially turn him into a fighting man, even if he has no experience. So are crossbows game-changers? In a word? No. 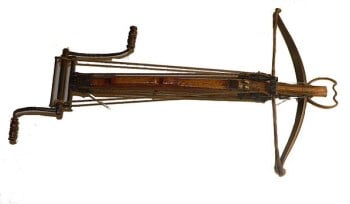 Crossbows are clumsy and can be prone to malfunctioning. However, many were very powerful, and mounted on turrets with elaborate winch systems to pull their 350-pound weight. The main drawback to a crossbow is that it is slow. Whereas a longbow can fire every six seconds, a crossbow, especially a powerful one, could take much longer to fire. They feature a stirrup on the end that you can use to put your boot in, to pull back the string.  I’ve tried to cock a 150-pound crossbow and it’s no easy task. Let alone doing it multiple times. But then, I guess, I have no chance of drawing a 150-pound longbow, either.

So now that I’ve broken the surface on bows, I’d like to mention arrows. A quiver of arrows, unless it is magical, has a limited capacity. Hinged wooden boxes could carry forty or more arrows, but they were typically transported with other supplies in times of war. Hip or back quivers could probably hold a maximum of thirty arrows, twelve being a very comfortable amount for target practice. During hunting, perhaps you could get away with three arrows tucked into your belt. If you miss, your prey is running after the first one.

Arrows come in all sorts of styles. Again, not to go into too much detail, but they are all of pretty much the same design, a wood shaft about 32” long, fletched with feathers, and tipped with bodkins or broadheads.

They could have had three or four feathers. In the case of the former, the feather perpendicular to the nock (cock feather) would be of a different color, usually barred, so you can tell it from the others and can nock the arrow correctly on the string. In the case of four-fletching, the feathers all make an “X” and none of them should hit the bow upon release.

Regarding feathers, any wing feathers from large birds should suffice, but here are a few examples from our history. Turkey feathers were very common, and could be dyed all sorts of colors with natural dyes (those are the barred ones you see most commonly). Belgians preferred peacock feathers, which were reddish-brown, and in Turkey, eagle feathers were used.  However, eagle feathers could only be kept in a quiver with other eagle feathers, or they would degrade the other types of feathers, “eating them to the wood”.

Feathers were tied to shafts, not glued, and either sinew or narrow yarn or thread could be used to accomplish this. When feathers were ruined, they could be untied and recycled, arrow repair being far more common than simply throwing them away. Making nocks is time-consuming work, especially where horn is inserted to strengthen them, in the case of high poundage bows.

So when portraying archery in literature, it’s important to be consistent. Think about the natural world around your characters. Are they importing materials from tropical places or are they foraging for supplies in the wilderness? Does your character visit a fletcher in every town to repair his arrows or buy more, or does he make his own around a campfire while his friends are drinking?

Archers can be colorful and important characters, and doing a little research into the history of archery will help you to include the details, which lend authenticity to the character.

Do you have any questions about archery?  Also, who is your favorite archer in literature or film?

Robin Hood. He’s got skill, class, and ethics. Just about everything a person could hope for in a hero. Jonas Armstrong is such a lovable and wonderful example of the legend. 🙂 Very sad they cut the series short. It could’ve been something more. 🙁

Came across your site in researching information about how to write about archery. Great information so far. 🙂 Writing a story of forbidden love, warring kingdoms, and revenge that threatens to ruin the heroes’ lives.

Thank you for the very helpful article. 🙂 I have a question that’s sort of dumb, if anyone could help please ping me. What did archers do with their bows when not using them, especially while traveling? Just hold them in their hands? Or what there a holster of some sort? Thank you, it won’t make it into my book this time but I want to know for the next one. 🙂

AnitaHowitt Thank you again for this useful article.

Excellent collection of information all in one spot. Nicely done and very helpful.

Thanks for this great article! Having studied archery extensively for my own writing, I deeply appreciate someone distilling the information for a broader audience. We fantasy authors are prone to make many mistakes in basic accuracy when writing about these fantastic old combat forms.

RiseOfTheTiger thank you for your comments and enthusiasm.  I’m glad so many people found this helpful.

Katniss Everdeen in the Hunger Games film. She did the impossible by staying ethical, resisting oppression and still fought for her life in a game to the death. The female empowerment theme was also a plus.

Pre-Crisis Green Arrow (or the JLU version, quite close to the original)

Katniss Everdeen from the ‘Hunger Games’, she’s strong and rebellious.

Missun Akin the Dunmer from The Elder scrolls Lore.

This is incredibly helpful. Thank you for putting it up for others!

What, no mention of handheld repeating crossbows? I guess they’re not normally considered medieval, but they’ve seen use for two millennia. (One of the characters in my WIP uses one. I portray it as a cantankerous hunk of junk that jams if you so much as breathe on it wrong, but that nonetheless has a significant rate-of-fire advantage.)

What, no mention of repeating crossbows? I guess they’re not normally considered medieval, but they’ve seen use for two millennia. (One of the characters in my WIP uses one. I portray it as a cantankerous hunk of junk that jams if you so much as breathe on it wrong, but that nonetheless has a significant rate-of-fire advantage.)

Robin Hood in myth, Astrid Loring nee Larsson in Literature (from the Emberverse series by SM Stirling) and Ishida Uryu from Manga and Anime (from Bleach)

Robin Hood when I was a little kid, Legolas as soon as I read Lord of the Rings in high school. Legolas is noble too! 🙂

Legolas, always. For his skill and his devotion to his friends

Robin Hood for me. But I think what draws me to him was his noble character, not necessarily his skill with a bow.

Legolas every time. And mainly because of how him and Gimli make everything a contest

@Stephen Evans I did love that too!

william tell /i wonder how many tries he had to perfect his apple on the head deal.