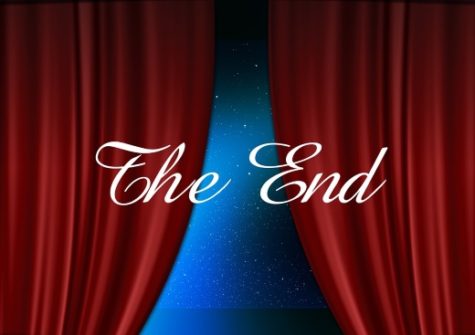 This is Part 2 in this series.  Part 1 addressed how to write beginnings.

If beginnings are important, endings are doubly so. From the first line of a story each word, each scene is driving the reader toward an eventual specific point. Predetermined, concrete, the ending is in place before the reader even knows the character. It doesn’t change. The reader cannot alter their course. Whatever has been preordained shall come to pass. So, how can you create an ending that will make a reader crave more?

There’s loads of different ways to end a story. Sometimes a story calls for a typical “happily ever after”, “bittersweet”, or “tragedy”; sometimes an ending sets up a sequel or series and some things won’t be resolved; and other times a story requires a special kind of ending that breaks some rules, like the not really recommended “it was all a dream”. A story’s ending is everything after the Act 3 Climax, and its job is to wrap up loose ends, complete the character’s arc, and show how life will be different with the antagonistic force defeated.

To satisfy a reader, it’s important that an ending address questions the story raised. Not every little thing needs to be hashed out in great detail, but any secondary characters with unresolved subplots need to be dealt with, any promises the story made to the reader need to be fulfilled. Left unfinished, over time those turn from slight annoyances into nagging questions, which can make a reader feel a sense of regret about the lack of closure. If a subplot can’t be resolved, or a question can’t be answered, consider cutting it from the story, or if that won’t work at least let the reader know by mentioning it. An ending that feels incomplete leaves a bad taste in a reader’s mouth even if they enjoyed everything else.

In a positive or negative change character arc, the ending image of the main character should be opposite the opening image. Check my earlier article on how to write character arcs if you have questions about character arcs. The character may have had all the information he needed to best the antagonistic force, but his change isn’t complete until he acknowledges it in the ending (especially in a negative change arc, where the character has fully embraced the worse version of them). Also, this gives a feeling of coming full circle. Completion. When readers feel like the story is complete (even in a series), they want more. They’re more willing to try an author again who came through on their promises once already. Great endings create fans.

After the sequence of events that led to the antagonistic force being defeated, we have a lessening of tension, a moment after the storm in which the sun peeks out from the clouds and the birds start chirping again. Action is exciting, but readers find the quiet moments just as riveting, so long as they stay pertinent and help to resolve the questions the story posed. The ending may be the most important place for those less action-packed moments to shine.

Life is different after the antagonistic force is beaten. The ending should show how the world around the character is changed. It’s easy to show everyone returning home after a battle, or rebuilding their home or town. What the character is doing (despite his actual physical actions) is adjusting to life without the baddie. Maybe he’s irreversibly damaged from the final showdown, or maybe he suspects the antagonist isn’t really gone forever…the resolution can be a great place to create a huge emotional impact for readers.

Whatever the character lost, whether it be a person, their self, etc., they couldn’t experience the full effect of the loss until the antagonistic force was out of the way. Now that the character has saved his friends, or destroyed the cursed thing, what does it mean to him? How can he fully experience the loss he suffered earlier in the story? It can give him a new choice that will take him through the resolution.

The last scene is the place to let a reader know that life goes on. Like with greetings and first impressions, simple and clear is the way to say farewell. It’s fine to hint that trouble will continue, or revel in the fact that happiness has been found, but remember readers have just gone through a final battle. Your clever character just bested a foe that should have won, and the reader wants to enjoy the win (even if it’s bittersweet). By keeping the last couple scenes meaningful and brief, you add energy and connection to your climactic sequence. Meandering scenes that take too long detract from it.

In short, choose what to show. It may make sense to use two or three short scenes that don’t require a lot of setting up, or one bigger scene may be the right fit. Pacing the ending like the beginning will help you trim excess words that detract from reader engagement. Just like there’s no room for sprawling beginnings, there’s no room for sprawling endings. Have a scene goal, and cut anything that doesn’t effectively support that goal.

A Promise of More

Let the reader know there’s more out there and that the character’s journey isn’t over (unless it is). If there are following stories, the very end is a great place to either create a new question or bring up an unresolved subplot that will turn into the main plot of the next book.

What’s the most important thing to say to the reader in parting? What’s the last image you want to leave them with? Pick something that will have lasting emotional value. In one story, I had a husband die a traitor in the climactic sequence. In the Resolution, the widow faced an inquisition into his personal affairs (though she believed in his innocence) with dignity, and then made plans to bury her husband and return home. In the last scene, one of the husband’s co-conspirators shows up at the widow’s door and says she’s going after the real traitor…and the widow grabs her coat and asks when they will leave.

If you’re setting up another book like I did in that example, remember that a Hook raises a question for the reader, and you’ll want to make sure to give them a reason to wait for the next story. It can help to create some sort of twist or reversal on the last page, but if you plan to go that route, make sure you set it up as a possibility earlier. It’s great to spring a surprise, but it has to make sense or it just feels tacked on.

What do you think makes for a good ending?  Do you have a favorite example?

What do you think makes an ending fail?  Share an example of a failed ending.

Have a great ending? Let’s hear your ideas!

I really struggle with endings because they have to be that perfect mix of finality/catharsis and acknowledgment of the journey…without dragging on top much.

I found the Harry Potter series ending to be frustrating because she jumped forward and took away so much of the mystery that the reader could have filled in for herself. It felt like Rowling wanted too much control at that point…(ok love her anyways)

I feel like a good ending has to have a basis of answering most questions while leaving the reader with some unanswered ones. The unanswered questions can leave room for a next book or even tie into a series of books if the author decides. I don’t want every detail of the final conflict being resolved to read like a new paper but rather a poetic statement from the heart. Does this make sense?

'mysterious magical places need to remain mysterious and magical' about sums it up.

Yes, that was how the writers of Lost left it. They kept they mystery in the "mystery box." That frustrated me, because I was under the impression that the mystery was a puzzle, and many of us were trying to solve it.

It's kind of like watching a murder mystery, and at the end the killer is never discovered. Instead, the detective shrugs and says "oh well, we can't know everything."

LOL! It just seemed from the moment polar bears were mentioned that it was a puzzle to solve…but no.

I think that the ending of the Lost TV series was a major disappointment. While it did a great job of tying up character arcs, it left many crucial questions unanswered… especially regarding the nature and origins of the mysterious island. I, like most viewers, believed that an explanation was forthcoming, and spent hours speculating as to what it would be. When no explanation was given, we felt cheated.

'mysterious magical places need to remain mysterious and magical' about sums it up.

I think that the ending of the Lost TV series was a major disappointment. While it did a great job of tying up character arcs, it left many crucial questions unanswered… especially regarding the nature and origins of the mysterious island. I, like most viewers, believed that an explanation was forthcoming, and spent hours speculating as to what it would be. When no explanation was given, we felt cheated.

I am still reeling with disappointment over the Game of Thrones finale. While some satisfactory elements were there, it left too many strands of the story unresolved. This lack of resolution is frustrating to readers and viewers.

I felt the same way about No Country for Old Men and the Sopranos.

Please, writers and producers, take heed: if you introduce a storyline, realize that your audience will expect for it to reach some type of resolution. If you do not provide resolution, you will instead generate frustration!

A. Howitt
Reply to  Greybeard

Sopranos! Oh yeah. What happened there?

Thanks for the comment! Wrapping things up is so important, and yet we sometimes can’t fight the urge to leave things a mystery. It’s a breach of trust. Some people will tolerate it on occasion, but most will find it frustrating and uncomfortable, and they’ll be upset for long time after a bad ending.