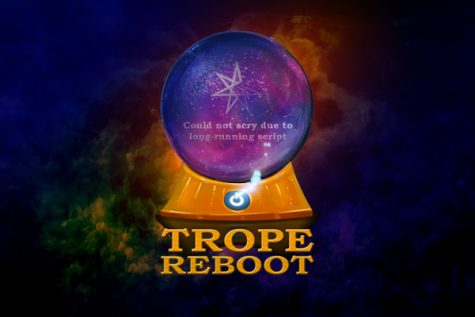 Fantasy novels are complex tomes filled with beguiling magics, curious creatures, unspeakable names, countless political fiefdoms, more breeds of elf, and thousands of years of adventure. Your readers have to learn all those new particulars without wanting to burn your book in rage.

Thankfully there’s a trope for teaching those details. Let’s reboot the Mentor.

Few people or characters learn everything on their own. Most of us have guides, teachers, parents, and role models to help us on our way forward. These are the people who have walked the path ahead of us, who have earned their knowledge through labor and first-hand experience, who pass their hard-won wisdom onto us.

That’s not what makes a mentor.

As a trope, the mentor doesn’t exist to share his or her experience with the hero. A hobbit cannot become a wizard. The slayer will never be a watcher. Harry never wanted to become headmaster of Hogwarts. The mentor’s abilities are usually very different than the hero’s. Otherwise the mentor would be able to handle the conflict alone.

The mentor’s experiences are beyond the hero, mysterious and unattainable, and yet almost useless for ultimately solving the problem at hand.

Instead, mentors explain the world. The mentor is mysterious because the author’s world is mysterious. Little by little the words of the mentor help readers to understand the setting and its hidden magics. But the mentor doesn’t simply teach.

Is the hero’s magic slowly destroying the world’s rainforests? Are there underground ghosts ready to murder the nation if the hero fails to clean his or her blade? Is the villain really the main character’s step-mother’s third grandson? The mentor decides when we get to find those details out.

The mentor isn’t a teacher with a textbook but a manipulative secret keeper, spinning half truths to trick our hero into risking his or her life for the cause of good.

So with our mentor, Greyfather the Undaft, let’s come clean to the readers, but not the hero, about the secrets being kept in his endless schemes… to save the world.

Every mentor needs a hero, a person they believe will rise up to overcome the conflict at hand. But something has to set this hero apart from the other farmers and lost princes. They are bearers of the Chosen MacGuffin, of a special secret or a royal lineage or a magical force which designates this individual as the target of the mentor’s manipulative guidance.

For our undaft mentor, we’re revealing our secrets to the reader up front, which gives us the chance to create irony that we can use as a font of both drama and humor throughout the story. That irony will work best if we make the mentor’s secrets dark and a little ridiculous, a striking contrast with the upbeat old teacher we’ve come to expect. We also want to take this as the earliest opportunity to develop just how our story reveals these secrets to our readers.

Let’s make Greyfather the Undaft into Greyfather Mantias, a man who grew up as the royal wizard of his nation, teaching Prince Pellius alongside his own granddaughter Velanise. When Velanise was assassinated in an effort to eradicate their magical lineage, Greyfather Mantias secretly transferred her soul and magical ability into the nearest vessel, Prince Pellius’ subconscious. By letting Pellius breathe in a special incense while he sleeps, the Greyfather’s granddaughter emerges in his body for a short time, allowing her to speak with her grandfather about their secrets without Prince Pellius knowing.

Personal, dramatic, desperate and ironic, our mentor has chosen his hero for all the wrong reasons. Greyfather Mantias wants to protect the soul of his already deceased wizardess granddaughter for as long as he possibly can.

The Cost of the Magic Within

Most of the time a hero’s magic doesn’t need to come at a cost because the conflict lays out a heavy burden of its own. A good hero marches into danger, bungles into traps, and falls under pursuit by the most powerful creatures of the fantasy world. Heroes watch their hometowns burn, their allies turn traitor, and their mentors die, all to make them step it up.

But sometimes the hero’s power isn’t earned through training and smarts. Sometimes it’s not a gift or a birthright. Sometimes the hero is first a victim. And to give a character a more emotional arc than accepting the call to responsibility, it helps to give their magic a steeper price.

And as Greyfather Mantias tries to come to terms with the fate of his granddaughter and his prince, he must face the dire consequences of his actions, the penalty for cheating death.

For years Greyfather Mantias taught his granddaughter magic through Prince Pellius’s sleeping body while the prince learned swordplay, scholarship and diplomacy by day. But when his horse saw an enemy monster and threw Prince Pellius from his back, a magical instinct overtook Pellius. He electrocuted his horse in a lightning bolt that scared away friends and foes alike from the battlefield.

As from then on Pellius learned to channel this mysterious force that was Velanise’s magic, Greyfather Mantias had no choice but to participate in a training that would gradually lead their two souls to be drained until what was left of them could merge into one. And only Greyfather Mantias knew what activities would lead one soul to drain faster than the other.

The price of the magic Prince Pellius finds himself with is to give up some portion of his soul to his childhood friend. Can Greyfather Mantias be trusted to guide this process? Or will he sacrifice one for the sake of the other?

Even our twisted magic hero needs a villain, and almost as a rule a good antagonist for a story with a mentor requires two things:

– A desire to target the hero’s unique qualities.

– A direct connection to make it personal for the hero.

For our story focused around Greyfather Mantias, we effectively have two point of view heroes in one, Prince Pellius and the wizardess Velanise. This means that our antagonist needs a personal connection with Prince Pellius and a motivation to pursue the assassination of Velanise.

And again, because our secrets are being revealed to our readers first, we need a twist that’s both dramatic and a little ridiculous to use as a font for irony in the story. Finally, it provides an opportunity to develop the story’s themes if the antagonist takes actions similar to those experienced by the hero early on.

Our antagonist, the former Queen Nina Fulget, is Prince Pellius’ mother. After she murdered Grayfather Mantias’s two adult children, including Velanise’s mother, she transferred their souls into a necklace she had prepared to harness their magical lineage into permanent artefacts for the long-term good of the nation. For this action, which she believed her king would eventually come to appreciate, she was banished from the kingdom and her necklace was locked away in a vault to officially be left unused. But the king, and Greyfather Mantias, had agreed to give the necklace to Velanise as a wedding gift for her arranged marriage to Prince Pellius. After Nina Fulget murdered Velanise and stole her necklace, she began her schemes to show why the true power of wizardry should belong only to those who rule.

Nina Fulget offers our two-in-one hero a personal and dramatic struggle, between being Prince Pellius’ mother and having murdered Velanise’s. Will this place our heroes at odds with one another? And as their souls merge into one, confronting Queen Fulget becomes a personal drama for the ages.

For how long will Prince Pellius remain in the dark as he battles his mother’s magic and loses parts of his soul to Velanise? When he learns the truth will he be tempted to turn against his scheming mentor or to give himself up for the woman he was once to marry? Greyfather Mantias has the burden of weighing these guilty thoughts over the secrets he keeps.

And that struggle works against the mentor trope’s biggest weakness. As our readers’ mysterious guide, the mentor projects confidence in our hero’s way forward, so much so that the mentor must usually die for the danger to become real.

So let’s do something creative and give our mentor his own uncertainties.

Are there any creative mentors that have stood out in the books you’ve read?

What are some other creative ideas for using the mentor trope?

Most importantly, what trope would you like us to reboot next? Let us know in the comments below.

The Trope Reboot series tries to find creative ways to remake old fantasy tropes. All ideas presented in this series may be used freely. To nominate a trope to be rebooted in this series, post your nomination in the comments section below.