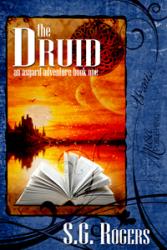 This article is by S.G. Rogers.

I’m a fantasy author who enjoys building worlds.  Perhaps my interest in world-building stems from the wonderment I feel in the presence of beauty.  Magic exists in the waterfalls of Brevard County, North Carolina, the stunning views at Big Sur, and the Carlsbad Caverns, New Mexico.  Magic radiates from the paintings of Michelangelo, the castles of Europe, and the sculptures of Bruno Torfs in Australia.  When I experience this magic, I feel compelled to communicate my sense of awe in the stories that I write.

I’ve sold eight fantasy manuscripts so far on the strength of my world-building, with two sequels in the works.  Although each project has its own unique challenges, my approach to world building involves a few common principals.

The way I describe a fantasy world initially is dependent on how my main character arrives.  Does he tumble down the rabbit hole like Alice, traveling from mundane, ordinary surroundings to someplace extraordinary?  Or is he like Gandalf, for whom Middle Earth is just another day at the office?

Excerpt from The Last Great Wizard of Yden:

As Jon took in his surroundings, his mind refused to accept what his eyes were showing him. Somehow he’d traveled instantaneously to a village plucked straight from the pages of a medieval storybook. People were shopping at a busy open-air marketplace nearby, which consisted of rustic wooden stalls, booths, and tents. No cars were on the road, nor could Jon see any modern machinery of any kind. Women were clothed in long, coarsely woven dresses, while men wore cloth shirts and trousers with hide vests.

When a light rain began to moisten his skin, Jon focused his attention upward. To his astonishment he saw not one but two suns in between the streaky, gray clouds. One was nearly overhead and the other, much smaller sun was on the horizon. The realization he was no longer on Earth began to sink in.

If my main character arrives in the fantasy world abruptly, like Jon arrives on Yden, a bit of sensory overload is in order. If my main character is already in place when the story begins, details will trickle in more slowly. In either case, I like to address all five senses—what the world looks, sounds, smells, feels and tastes like, where appropriate—plus whatever extraordinary senses (ie: magic) apply.

Whichever way I begin to build a fantasy world, however, it’s critical to put my descriptions and details in context.

Context is sort of like the Haunted House attraction at Disneyland.  From the outside, you see an ordinary Plantation style home.  Once you step inside and ride the spooky elevator down to the basement, weird details begin to emerge.

Similarly, I want the reader to be drawn into my world right away.  I start with what is familiar, and work from there to establish what’s different, or unusual.  Most people will have an immediate picture in their minds if I describe an ordinary field surrounded by a forest, for example.  Once I layer in the fantastic details, the wheels begin to turn.

Excerpt from The Druid:

Dani and her kidnappers had materialized in a field of electric-blue grass laced with broad swaths of green four-leaf clover. The sunlit sky was unlike any Dani had ever seen. The color was a kaleidoscope of intense periwinkle, purples, and pinks, with an occasional silvery wisp floating past. Reminiscent of the aurora borealis, the effect was dazzling, but Dani could scarcely enjoy the view in her current predicament.

She was lying in the grass, trussed up like a turkey, and utterly helpless. Unable to speak because of the rubbery tendrils across her mouth, Dani could only glare at Ninn and Ginn. Moments ago, the creatures had appeared spectral, but now they were vividly clear. They were humanoid, but the facial features under their hooded capes were strangely avian. Ninn prodded Dani’s thigh with the toe of his black boot. “It’s a female,” he chirped.

Nevertheless, even the most awesome details in context will fall apart without rules.

As the author, I must decide the rules that govern my fantasy world.  If my story takes place on a different planet or plane of reality, do the same laws of physics apply as on Earth?  What sort of government is in place?  What do clothes look like?  Do non-humans exist, or unusual animals?  Do people speak English or Gobbledygook?

Here, I usually employ the KISS method (Keep It Simple, Stupid).  I see no need to reinvent the wheel if the wheel isn’t broken.  Also, the rules that govern any system of magic in a fantasy world should be easily understood, logical and consistent. I don’t dwell overmuch on rules and details that have little impact on the plot.  Finally, I always look for ways to describe rules as visually as possible.

Excerpt from Minna & The Valentine:

The elderly wizard created a filmy white barrier between himself and Minna, like a fine linen curtain.

“This represents the barrier that separates one reality from another,” he said.

“I wish it were,” Thaddeus replied.

Picking up a knife, he made a downward, jagged motion in the milky whiteness. The edges fell apart and Minna could see straight through.

“A certain wizard has managed to break through this barrier and in doing so, created a tear, like so,” Thaddeus said. “It has disrupted the magical balance in our universe.”

So after I describe my fantasy world, put the details in context, and establish the rules, it’s time to drill down and add my personal touches.

Excerpt from The Druid:

Dani entered the Asgard City limits. The metropolis practically crackled with excitement. Shimmering white buildings cast such a blinding glow that she had to fumble for her sunglasses. Feeling like a hayseed, she tried not to gawk. Fortunately, her dark lenses helped hide her wonderment.

Dani passed elves, fairies, humans, and giants so tall they could have picked the fruit from a fifteen-foot avocado tree without benefit of a stepladder. At first glance, elves resembled humans—until the tips of their ears showed through their hair. Elves were usually tall and slender, with an athletic build.

Fairies, on the other hand, had a more waif-like bone structure. In looks, they were similar to humans too, except for their wings. The delicate appendages were usually folded invisibly into expensively tailored clothes. The wings only burst forth in times of extreme joy or anger. Dani skirted past a group of fairies just as one of them cracked a joke, and she was nearly blown off the sidewalk.

I enjoy using objects literally to achieve a humorous effect.  For example, a cornflower comes complete with a miniature ear of corn in the center, and a sunflower shines with light.  I also look for ways to use things in an unexpected manner, such as when rocks can yodel or frogs croak in three-part harmony.  Opposites are always fun, like a tiny dog named Dragon, or an ogre named Biscuit.

The bottom line in world building is to create a place where a compelling and effective story can be told.  A good fantasy world is almost a character in the narrative, but I feel it can’t be so overwhelming that it detracts from the action. I strive to create a backdrop so seamless and effortless that it could be real.  When it works, it’s magic.

Do you believe a fantasy world is like a character in the story?  If so, should it be a main character or more of a supporting player?

Originally a native of Southern California, S.G. Rogers currently resides in Savannah, Georgia.  When she’s not writing, she enjoys practicing martial arts.  To learn more about S.G. Rogers, visit her blog at www.childofyden.com.

Thank you, SG, for some very usable perspectives towards world building.  I particularly appreciated the suggestion to “don’t dwell overmuch on rules and details that have little impact on the plot.”  World building can be so consumptive and engrossing that it can feel like story telling.

More so than any other genre, I think the setting and the world must take a strong supporting role in the story, just below the protagonist and antagonist.  It is often the supporting metaphor for the story being told and serves to illustrate (or distort) the themes and message of the story.

This is a great article for a beginner. I can only imagine how tough it is to create a world along with a storyline and characters. It adds a whole other level of work for the writer.

Great post! I’d also like to know how you keep all the details straight from one book to another. I have a hard enough time with this writing about the “real” world!

I’d hate to nitpick here, but I think the examples you ran with were a bit fluffy for my tastes.

The concept of creating worlds is fantastic. Keep in mind you are dealing with an analytical, scientific mind that wants explanations, not a fantastical mystery that accepts ether and ectoplasm are the norm.

This is a good article though, one I would use to teach the young pups how to do it right (with less words, of course)

Yes, a fantasy world should be like a character in the story. How much you describe the world, though, really depends on how much significance the world has to the story. In some cases, small descriptions are necessary. In most cases, however, the world should have its own personality, strengths, and weaknesses.

Like Dorothy in Oz, or Alice in Wonderland, you have to create a world in which the character can breath and move forward. Great post, Suzanne! Tweeted and shared.

Good advice. I love to keep things simple and not crowd too many details in too little space. When that happens it makes for difficult reading and people will give up, no matter how interesting it sounds. I subscribe to the thought that any novel should be a pleasure to read, not a chore. Good article.

I haven’t read Druid but I’m going to go check Amazon for it now.  It sounds like your style is quite reminiscent of Piers Anthony, or at least, in the case of your cornflower.