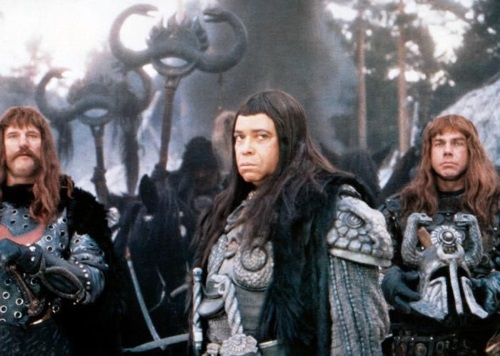 In the summer of 1982 I had a life changing experience.  Although I was underage, I accompanied my father to see the new epic fantasy Conan the Barbarian, starring Mr. Universe Arnold Schwarzenegger.  While the film itself was amazing (especially the score), I was particularly impressed by its charismatic villain, Thulsa Doom.

As portrayed by James Earl Jones, this Thulsa Doom wasn’t the grotesque necromancer from the Robert E. Howard stories.  Instead, he was an appealing and persuasive speaker with the power to control the masses.  When he spoke, people obeyed him – even eagerly jumping to their death at his command.  He was, in short, a cult leader.

The Fascination of Cults

Conan was released less than four years after the infamous Jonestown massacre, during which more than 900 followers sacrificed their lives for their leader, the Rev. Jim Jones.  The world’s attention was captivated by this event.  The movie incarnation of Thulsa Doom was remolded in the image of Jim Jones, and frankly, this made for a far more interesting villain.

When writing a fantasy story, one of the prime considerations is to present evil in a memorable and menacing way.  It has been said that a story is only as good as its villain, and this is especially true in epic fantasy.  The best fantasy literature follows the classic paradigm of good vs. evil, and evil is typically portrayed as seeking or possessing power.  The tremendous power exhibited by a cult leader is an especially potent example of this.

A cult leader convinces an individual to surrender her freedom.  Exactly how they do this is a mystery to most of us.  The end result, though, is that cults possess a certain supernatural mystique that people find compelling.

What Makes a Cult Tick?

First, we need to understand what differentiates a cult from a mainstream religion.  In a nutshell, a cult exercises an unhealthy level of control over its members.  A religion may have an unusual – even bizarre – belief system, but if it respects an individual’s freedom, it isn’t a cult.

There are also common characteristics and behaviors which most cults feature:

If you find a group that displays several of these attributes, you should tread carefully.

To create a cult for your fantasy story, the best place to begin is by studying real life examples.  Cults come in all shapes and sizes, and if you do the research you will likely find one to model your own cult after.  A good starting point for your research is the Rick Ross Institute Internet Archives for the Study of Destructive Cults.

Conducting this research will also help generate ideas for your villains.  Cult leaders tend to be colorful characters with complex, conflicted backstories.

Another valuable resource is Influence: Science and Practice, by Robert Cialdini.  This book is the classic text on using persuasive techniques to influence the beliefs and behaviors of others.  The truth is that there is no great unknowable mystery behind how cults influence their members.  As explained by Cialdini, there are scientific principles of persuasion which we encounter on a daily basis.  What cult leaders do (often unknowingly) is exploit these principles beyond all ethical boundaries.  If you want to understand the “magic” behind cults, Influence is the place to begin.

If you do decide to create a cult for your story, remember the cardinal rule of writing: avoid all clichés.  While I recommend using a real cult as a model, it is important to put your own unique twist on it.  Do something unexpected.  When handled well, a cult – and its leader – can become a memorable component of any fantasy story.