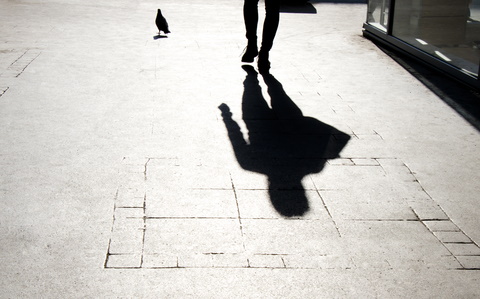 This is Part 8 of the Mythic Guide to Heroes & Villains.

We spoke of archetypes earlier, and one archetype that we often see in the realm of villains is The Shadow.

The Shadow is an embodiment of our darker selves. An apparition is formed — either literally or metaphorically — from the dark corners of our minds. We try not to acknowledge it, but instead bury it deep within the psyche. Still, it can’t stay buried forever, and will eventually manifest itself in some fashion.

Characteristics of The Shadow typically embody the ugliest aspects of human nature, such as lust, greed, hatred, dishonesty, and violence. The Shadow can also be a manifestation of more complex elements, such as repressed memories.

In the realm of fiction, it is not uncommon for the villain to be the embodiment of the hero’s shadow. For this reason, protagonists sometimes see a part of themselves reflected in the villain.

The Creature created by Dr. Frankenstein (The Creature commonly being mistakenly known as “Frankenstein” himself) is an excellent example of a shadow archetype. A dark and menacing monster is created as a result of Dr. Frankenstein’s attempt to defy both God and Nature. A physical embodiment of his own sins is born. This is a more literal take on The Shadow.

A more metaphorical example is the relationship between Luke Skywalker and Darth Vader. Luke initially views Darth Vader as some dark unfeeling “thing,” but later comes to see a reflection of himself in Vader due to his own rash and sometimes violent behavior. And of course, we learn later of their blood relationship, further reinforcing that Darth Vader is the cloaked silhouette of Luke Skywalker’s inner demons.

A shadow is a dark and scary figure, but it is a silhouette of ourselves.

Characteristics of a Villain

Like the hero, the villain has many tried and true characteristics that have worked well for years. If the common characteristics interfere with your own creative vision, you are not required to use all or even one of them. But most successful villains have utilized several key characteristics, and their value should be considered when creating your own villain.

No villain can fulfill his purpose within the story unless he has a means to challenge the hero. A villain must be powerful in order to be a real obstacle for the hero, and not just a minor annoyance.

At the beginning of a typical story, the villain is not only portrayed as being the hero’s equal, but as a superior.  This is because the reader must be uncertain of the hero’s victory. The hero’s success should defy the odds.

Villains can be powerful in various ways. Anything that makes them a true challenge to the hero is credible.

In many science fiction and fantasy novels, the villain is powerful due to large overwhelming forces. Examples include Star Wars and The Lord of the Rings. Villains may also be powerful simply within their own right, and are capable of standing toe to toe with any opponent even without henchmen.

But even the most physically powerful villains are typically given many soldiers and resources. This is to enable the villain to hinder the hero’s progress while holding back the final, face-to-face confrontation until the end.

It is also possible for the villain to be lacking in power in the grand scheme of things, but still hold a great deal of power within the context of the hero’s journey. One good example is the evil step-mother in the classic fairy tale Cinderella.

While the step-mother is typically portrayed as being a moderately wealthy individual, she is not powerful by most standards. She doesn’t have soldiers or henchmen, she doesn’t have the wealth or connections to buy judges and public officials, and she doesn’t even possess some sort of physical skill, such as fencing or marksmanship.  Within the terms of the greater world around her, she is just a typical old widow with some money to her name.

But from the perspective of Cinderella herself, the evil step-mother is exceedingly powerful. She controls the young woman’s life and future. The protagonist’s every moment is dominated by the will of this single force.

With the limited control over just one person’s life, the step-mother plays a pivotal role as one of the most well remembered villains from classic fairy tales.

Another good example is the typical serial killer character within mysteries and thrillers. This villain often has no help, and the entire world wants to see him caught and punished. He usually possesses no special resources or powers. Instead, he survives through knowledge and cunning, constantly baffling the authorities as well as the protagonist. And while most of the characters in the story will not be directly impacted by the serial killer, those who are unfortunate enough to become his victims are very much affected by him. The window of his power is very small, but to those unfortunate enough to fall within it, the power that he possess is great indeed: the power to decide who lives and who dies.

Read more of the Mythic Guide to Heroes & Villains.  Part 9 will look at Intelligent and Immoral Villains.

My principle villains in the 'Empire' series are shadowy, but don't really give the impression of being powerful – most of the time. At varios points in the series, they have masqueraded as entertainers, peddlers, common laborers, cooks, sailors, monks, and common guardsmen with great success. That said, a few times they have wielded greater authority: high priests, barbarian chiefs, and petty kings – but those were all in the past.

Interesting! My first thought was that this archetype often feels half-baked and latched upon the story at the last minute and that it seldom speaks to me. My second thought was "I wanna try it! How can I do this stuff?"

Stephen King's The Dark Half is a great example, I think.

It reminds me of this old blog-post, where the shadow is taken quite literally:
Why The Character Arcs in "Raiders" Makes the First Film Superior to the Other Films in the Series