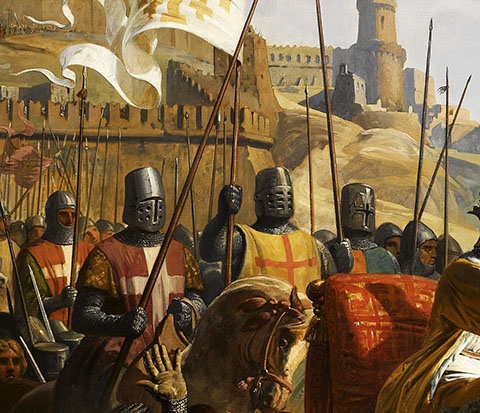 Warfare and military are an integral part of much of ancient and medieval fantasy. This is no surprise: warfare was a key element in development of society and of history, and much of mythology is also about it. As such, it is difficult for fantasy writers and readers alike to avoid war and military matters in general. And if you are going to do something, try to do it well. Army does not spring from the ground like the spartoi of Jason.

Environmental conditions include terrain, climate and resources. All three influence how an army will fight and which weapons it will use.

Terrain can be highly varied, but I will divide it into three categories: mountainous, rolling hills and flat. Mountains and forests – and especially forested mountains – are conductive to infantry warfare. Depending on other conditions (such as society, climate etc.), this can mean either light infantry with focus on ambushes, raiding and guerilla warfare; or heavy infantry, with focus on direct confrontation. Both of these were, at different points, in evidence in Spain and Greece. Light rolling hills and constricted flat terrain often lead towards domination of the heavy cavalry. Good example of this are medieval France, Italy and Germany, all of which had powerful heavy cavalry. Wide expanses of open terrain meanwhile lead to dominance of light cavalry, as with steppe nomads, though heavy cavalry was also widely utilized – example of both can be seen in Poland and Hungary.

Aside from just tactical factors, terrain also influences other factors which in turn influence composition of the army. Mountainous terrain (as in Greece and Switzerland) promotes political fragmentation, and thus often leads to appearance of significant heavy infantry armies – especially if local polities develop democratic governance. A flat terrain with many rivers will allow formation of larger polities, which are able to support significant heavy cavalry armies.

Climate is also a factor, as it can determine weapons and types of troops being used – a composite bow cannot be used in rainy environment which would dissolve the glue, and people living in a sandy desert may opt for camelry instead of cavalry. Elephants require massive food supplies. Climate will also affect armour, as peoples from hot areas will tend to avoid heavy cloth and plate armour, and may develop various types of protection from the sun – such as Arab turbans. Surcoat was adopted during the Crusades by Western knights as it protected from direct sunlight while improving ventilation, and then gradually abandoned as the crusades ended. In southern India and sub-Saharan Africa, use of armour at all was very rare due to local climate.

Climate also affects development of the military. Mediterranean states – Rome and Byzantium – developed standing professional armies a full millennium before it was economical to do so in the northern Europe. Heavy cavalry also requires climate and land which can produce the food for large horses.

The last question is available resources. If an area has only limited stocks of metal and cannot get more through trade, metal will be used first for weapons (swords, spearheads, arrowheads), and then – if any is left over – for helmets. Armour, due to its high metal requirements, will be made instead of more available resources – such as bamboo in Japan, paper armour in China, or quilted armour in Europe.

Geography also determines how powerful a state may grow. Ideal situation is of a state which has good internal connectivity with major rivers and waterways, yet its borders are determined by mountain ranges, swamps, deserts or such. Multiple river basins will lead to political fragmentation. Rivers can also be both barriers to invasions or potential highways into the heart of the country, depending on whether they run perpendicular or parallel to path of the invasion force: large armies will always depend on rivers or sea ports for logistical support. Any border defence system will also use terrain features to anchor its defences whenever available: mountains, rivers, marshes will be used to channel the enemy towards passable terrain which will then be fortified with man-made fortifications. In some cases, swamps may be created artificially. They will also provide a refuge for local population: during Ottoman-Habsburg wars, whole villages “disappeared” by relocating into the swamps during the campaigns, major raids, as well as before the taxation season.

Society also influences composition of the army. Tribal armies may be infantry-based, with tribal nobility riding horses (or, in earlier eras, chariots). Emphasis will be on individual valour and glory, which will then cause cavalry to fight as individuals, with no cohesion. Due to these factors, cavalry will rarely have discipline required for it to perform as an effective military arm. Infantry however will be no better: with no social status and no training, tribal infantry was typically little more than undisciplined rabble, with no battlefield effectiveness.

In a feudal state, as with the tribal one, an army will closely resemble the society it sprung from. A state with a high level of urbanization may be able to field large numbers of trained infantry, while that with a low level of urbanization will field large numbers of cavalry. But all these units will be loyal first and foremost to their local leaders. Both political and military power will be organized around families and individuals, though in a more developed society cities will also play a significant role.

In a federal state, units will be organized and recruited according to units of governance. Depending on the power of a central government, these units may have more or less local character, and thus be more or less heterogeneous in terms of structure, equipment, tactics and so on.

In a centralized state, an army will have to be professional, as a central government will rely on it to keep control – but this will require extensive administration and high levels of literacy. If a military system has to be decentralized for whatever reason, a state may end up being close to a federal model (as happened to Middle Byzantine Empire with its system of themes). If a state is fully centralized, it will be able to mobilize all the available resources, but will be unable to deal with sustained threats from multiple quarters. Centralization may also cause resentment in the periphery, preventing the government from mobilizing available resources and potentially even causing the state to break apart.

A tyrannical government can only rely on a standing army of full-time professionals as it requires soldiers willing to die for money, with no stake in the political system itself. Any other type of army prevents the tyranny from appearing. If armies are paid by their commanders, temptation will be significant for a commander to try and use the army to gain political power. In a feudal state, authority is based on the ability to provide protection for vassals, which means that political authorities will also be military authorities.

Culture itself will determine things such as propensity for innovation, willingness and ability to adapt, treatment of soldiers and civilians – both one’s own and the enemy’s. A society which sees its own soldiers as expendable and treats them inhumanely will naturally produce an army willing to perform extreme atrocities – but an army may carry out such atrocities even if soldiers are treated humanely. Atrocities are usual in two cases: during a total war and during an ideological conflict. Total war means a conflict between societies as such, and can only end with destruction of one or the other: the final Roman-Carthaginian war is an example of such. Examples of ideological conflict causing uncommon level of cruelty are Crusades (specifically, the Sack of Jerusalem which was seen as extremely cruel by standards of the time) and the Eastern Front during World War II.

If warriors fight for personal glory, or at any rate personal glory is seen as a key to social standing, then they will be given to displays of flamboyance, vanity, and also prone to having a code of honour which will turn war into a “gentlemanly” competition. But in the majority of cases, warriors will form only the elite of the society, while the majority of fighting will be carried out by semi-professional or professional soldiers. This was the case in feudal Europe, where noble knights were heavily outnumbered by professional men-at-arms, crossbowmen, pikemen etc., and also in the Byzantine Empire where military aristocracy provided commanders (such as Phokades and Komnenoi), but the army itself was profoundly professional.

How do political structures translate into military ones?