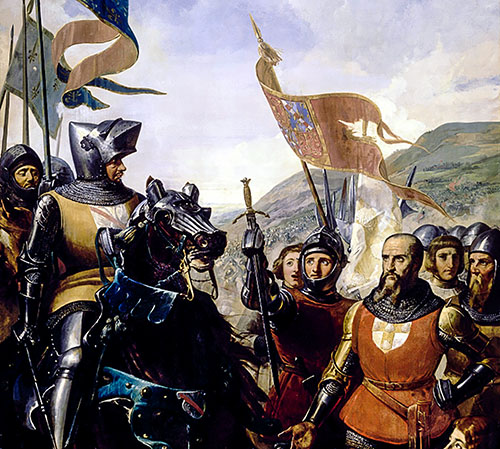 The most basic style of recruitment is that of a local militia – rural or urban – where a portion or all of the free men take up arms. Militiamen are usually not highly trained, but they make up for lack of training with motivation: fleeing not only carries social stigma, but is also harshly punished. As such, militias were more effective than what would be expected of “civilians in arms”. Militias almost always depended on relatively cheap and easy to use weapons, though urban militias might have access to more expensive weapons – such as hoplite panoply or crossbows. Tribal militias typically used weapons that were also used for hunting and sport. Peasant levy however was only ever used in a support and harassment role, and often had weapons modified from agricultural implements. Only urban militias could have heavy equipment. A common disadvantage of militia armies is the inability to deploy over long distances and time-frames due to soldiers having a day job; thus, focus on long-term warfare (be it conquest or defence) typically brings about the professionalization of the army. This also means that militias are best used in cases with high political fragmentation – such as city-states.

Part-time professional soldiers have a similar cohesive principle, where part of their morale draws from their training and unit cohesion, but another part draws from their role in peacetime society. Cohesion is thus derived from social bonds and common values alike. As soldiers are also part of the society, their presence also stiffens the resistance of the society as a whole. Between the social cohesion and relatively high numbers of such armies, they are – much like militia armies – capable of rebounding from massive defeats in a manner which fully professional forces cannot achieve.

Full-time professional soldiers, however, derive their cohesive principle solely from training, being uprooted from the local society. This allows them very long-term deployments away from the home, but also means that they require significant investment of time and money to be as effective as part-time soldiers would be. As such, they are inferior in a defensive role, but superior for wars of conquest.

Part-time and full-time professional soldiers appear in contexts where weapons are either expensive or difficult to use. The development of metal armour and introduction of cavalry thus both served to professionalize the armies, whereas mass availability of easy-to-use muskets helped bring back the nation in arms – though in both cases, developments were only gradual.

Mercenaries were commonly used by many societies, as they provided highly skilled and well equipped troops that were available as required, instead of being a permanent expense. They were often hired from within the country, such as a king of a feudal monarchy hiring troops from free cities.

Social structure also determined who commanded the army. In tribal and feudal societies, peacetime leaders were also wartime commanders. When it comes to part-time or full-time professional armies, roles were often separate – but not always, as an early Roman governor or Middle Byzantine strategos was a military commander of the forces in the province, but also an overall civilian authority of the province. In many fully professional armies the commission was purchased – with the result that they did not necessarily have an advantage in command and control over less professional forces.

How large an army would be depended on the ability of the state to support it financially and logistically. Armies of infantry militia could be the largest, as their part-time nature, low per-soldier expenses and short logistical tail meant that each soldier could be recruited relatively cheaply. During the Second Punic War, Rome drafted at most 7,5% of population in 215 BC, 9,4% in 214 BC, and 11,9% in 212 BC. In Second Mithridatic War of 83 – 81 BC, mobilization rates were around 8,3%. Overall, no pre-industrial culture managed to put much more than 7-10% of the total population under arms for a campaign season (90 days or so), and only professionals could be kept in the field year-round. Armies comprised of part-time soldiers were smaller: the Byzantine army numbered 1,14% of populace in 773, when it was highly cavalry-heavy, but 2,4% in 1025, after recovery and switch to infantry-dominant style of warfare. Hungary of  the 15th century managed to mobilize between 1,4% and 2% of populace in professional and semi-professional soldiers, and could raise this proportion to around 3% to 4% when a mass levy of peasants was called. Professional soldiers however numbered less than 1%. The Roman Empire, with its army of predominantly fully professional infantry, could mobilize some 1,3% to 2% of population to army, but this required financial expenditures which, in the long term, proved unsustainable.

Logistics form the basis of warfare. They determine the limits of the use of the army, how the army is used, how large it can be and where it can go. Supplies also make for a very vulnerable yet important target which has to be protected. All of this makes for a far more interesting story.

Logistics can be roughly separated into two categories: the logistics of outfitting an army, and the logistics of using an army. When it comes to outfitting an army, militiamen and part-time professional soldiers were expected to provide their own equipment, as well as some of the campaign supplies. This was true for Roman assidui levies and Byzantine thematic troops. Feudal and fyrd levies were also equipped and supplied in a similar way, while household troops in both systems had their equipment and supplies provided by their patron. By contrast, full-time soldiers were often fully equipped and provisioned by the state, though they just as often bought their own equipment, as was the case with the Roman legions of Principate.

Where armour and weapons were provided by the state, there were two popular choices: no armour, or munitions armour. Munitions armour could be segmented (e.g. lorica segmentata), lamellar (e.g. Byzantine and Chinese armours) or plate (such as Almain Rivet). Lamellar armour was very popular for the purpose as it could be quickly and cheaply produced, easily adjusted to individual soldiers by adding or removing rows of lamellae, and relatively simply repaired in the field. In Europe, munitions armour which appeared in 15th century was almain rivet, a one-size-fits-no-one half-plate armour.

The second part of logistics pertains to maintaining an army in the field. If  an army is 10,000 strong, with 6,000 cavalry and 4,000 infantry, this would mean 10,000 soldiers, at least 10,000 camp followers (assistants, armourers etc.), 6,000 war horses and 6,000 riding horses. Cavalry would require maybe 6,000 mules, with an additional 500 mules for infantry. Large war horses require a large supply of food if relying on pasturage, around 15 kg per day, while normal war horses requires 9 kg per day, and the same for pack or draft horses, while mules would require 7,5 kg per day. World War I regulations required 10 kg of oats and chaff for a charger, and 4,5 kg for a mule. If fodder was exclusively hard, then a horse may require 2,2 kg per day and mule 2 kg per day; a charger may thus require 4 kg per day. A soldier would also require 1,36 kg of grain per day. Mules also requires 20 l of water per day, and horses 30 l.

Total requirements come out to 77,400 kg per day. A standard pack horse or a mule can carry a maximum of 120 kg over any distance. Ridden cavalry horses would carry 34 kg of barley. As such, a horse with a rider can carry enough supplies for three days. The requirement of 77,400 kg per day would require 645 mules for each day of the march. For two weeks, each mule would have to carry 63 kg of fodder for itself and 19 kg for its guide, leaving 38 kg for supplies; due to the weight of a saddle and other accessories, this could be reduced to 30 kg. A march of two weeks requires 1,083,600 kg of barley, not counting fodder for mules carrying the fodder. Of this maybe 408,000 kg could be carried by cavalry. The remaining 675,600 kg would require 22,520 mules (on top of the 6,500 mules carrying equipment).

When it comes to foraging, around 25 kg of food may be pulled from each farmer without causing starvation. Now, a main army may move at 10 miles per day, and foragers can reach areas ten miles from each side of the army. This means that foraging can cover some 200 square miles. The population of England in 1450 was 2 million, for an average density of 40 per square mile. This means that an army may count on an average of 200,000 kg of food per day, or 2,800 000 kg over two weeks. Combined with the needs of camp followers etc., a practical field army was typically around 20,000 soldiers.

All of this means that warfare is hideously expensive. Even with an army of full-time professionals, the logistical requirements of an army still means that many peasants will not see their fields, many blacksmiths their workshops. When an army of citizen soldiers was fielded, campaign season was limited by the need for soldiers to help with the harvest, and wars were generally fought several hours to days from home.

Large armies will also tend to follow waterways. If an army can be supported from plunder, it can go wherever there is enough population to support it. But any larger army has to rely on ships, and thus stay close to coastline or navigable rivers. A consequence of this was that armies were in reality constrained to a network of paths, and key strategic points were fought over repeatedly. Constantinople almost spent more time being besieged than not, and the Ottomans repeatedly besieged the key Hungarian-Croatian fortresses of Belgrade and Jajce. Conversely, mountainous terrain is an excellent defense: not only will it constrain enemy’s logistics, but will also provide opportunities for an ambush. Rivers running perpendicular to an army’s march will also be a good defense due to the difficulty of crossing them.

Thus, an army can be defeated without engaging it in a battle. If its logistics can be cut off and its raiding parties neutralized, an army will starve to death, fall apart, or surrender, without ever engaging in a battle. But an attacker could do something similar to a defender by destroying his economic basis (that is, peasants). As a result, raids were the mainstay of warfare, as they could force the “turtling” enemy to come out of the fortresses and engage in a battle; a field victory could then result in an easy fall of a series of fortresses.

Lastly, while far from impossible, winter warfare was rare: most campaigns were mounted during summer or autumn, when supplies could be procured locally.

How does your army recruit soldiers? How does it equip them? How is the army supplied on a campaign?

Thanks for posting this.
The numbers were staggering.