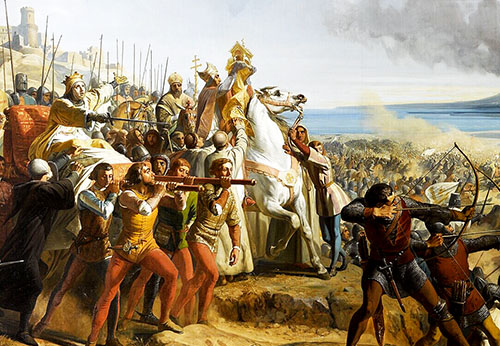 The structure of an army will depend on the strategy, as strategy will determine the army’s role and tasks. A state which carries out expansion through outright territorial conquest will have large numbers of heavy infantry, combat engineers and artillery, and possibly some heavy cavalry as well (e.g. Roman Empire, 10th century Byzantine Empire). If conquest is done by slowly destroying an opponent’s economic and social structures through constant raiding (such as chevauchee or razzia / ghazw), then majority of the army will be light cavalry, with some heavy cavalry support (e.g. Seljuk and Ottoman Empires), and light infantry will be used if terrain is unsuitable for cavalry. If a state is defending against cavalry raids, then light cavalry will be dominant (e.g. 15th century Hungary), whereas heavy cavalry will predominate if enemy raiders are primarily infantry. If enemy armies are too powerful to face in the field, light and heavy cavalry will be used to harass the invading army and cut off its supplies and foraging. In terrain unsuitable for cavalry operations, heavy infantry will be used instead.

Raiding — as a strategy — is generally preferred against a peer opponent, especially if a state cannot have a developed logistical support system. While much slower than a direct conquest, it is also much less risky: direct conquest is generally attempted only when one side is much more powerful than another, and even then often follows up in the wake of a campaign of raiding. Field battles happened when a raiding army was intercepted, or else a besieged fort was relieved by a field army – but in the Middle Ages, sieges too typically only happened after a long period of raids.

Defending against raids typically meant an increase in cavalry forces: especially light cavalry, though heavy cavalry also played a role. This cavalry would then be placed in a massive, very dense network of relatively small fortifications serving as operating bases for intercepting raiders. Conversely, when a major campaign of direct conquest started, these small fortifications would be abandoned and potentially razed, and defence would center around a smaller number of large fortifications backed by powerful field forces, capable of checking enemy advance in a siege and then destroying it or forcing it to withdraw.

A defensive army may be fully professional, but it is more likely to have a core of full-time professionals backed by larger numbers of part-time professionals and/or militia. Good examples of this are the theme system of Byzantine Empire and the army of Matthias Corvinus. Militia is in fact advantaged in defense due to motivation and knowledge of terrain. An army of conquest however is more likely to be comprised of full-time professionals, especially if conquest is done by direct approach. If conquest is done through raiding, however, a large portion of the army may consist of irregular raiders living from plunder and thus causing a constant pressure on the enemy.

In a tribal state, the army may be organized along familial or territorial lines. In England, the fyrd system was established by Alfred the Great, King of Wessex. His kingdom was divided into 33 regions, and each region was able to raise a regional levy (fyrd) for self-defense. Fyrd armies were organized by shire, hundred and soke, and must have had units of relatively regular size; as such, they required a sophisticated administrative apparatus. Tribal armies also had feudal retinues. While these were not the basis of the military organization, they served as bodyguards for important individuals and also provided the cavalry corps. Smaller landholders were tactically grouped around these retinues. Below them was select levy, where a group of families equipped a single semi-professional soldier. Lastly, general levy was assembled of all free men and served for local defence purposes only.

City-state armies likewise had militia raised among all free members of the society, but these were more likely to be heavy infantry. This also meant that organization was often lacking, with militia incapable of performing complex maneuvers. Their main advantages were cohesion and discipline instilled by communal feeling.

A feudal system is based on the senior-vassal relationship, where a vassal owes allegiance to his senior. An army was raised by a lord calling his retinue and his vassals’ retinues; and since he was a vassal himself, his army was also his senior’s army. This chain extended all the way up to the king. As such, military service was constrained, though terms varied from kingdom to kingdom. In England, term of service was limited to 40 days, while offensive armies were raised through a system of indenture. English field armies were generally no more than 10,000 – 20,000 strong, though at the Battle of Towton each might have been up to 30,000 strong.

In Hungary, a king could call vassals’ armies for an unlimited time if they were deployed to defend the kingdom, but offensive campaigns were financed through dispositio, where the crown (in a system identical to English indenture system) contracted for a number of lances with each baron. Due to Ottoman pressure, this system resulted in Hungary having a de facto standing professional army since the first decades of the 15th century (1420s at latest), consisting of fortress garrisons and permanently mobilized light cavalry forces. Each army was formed of banners (banderium), which in fact denoted two things: a basic tactical unit of 400 soldiers, and a unit provided by a single contractor. Since the ability of contractors to raise units varied, one 400-man banderium could be formed by combining banderia of multiple contractors, or else one contractor might provide multiple 400-man banderia. Hungarian field armies numbered typically around 20,000 men at most, but could exceptionally reach up to 60,000 men, and were – partly due to wagenburg tactics – capable of year-round campaigns, even in the middle of winter. In less organized feudal societies, however, banners would not be standardized as Hungarian banners were, with the consequence that the ability to field large field armies would be severely restricted.

A major disadvantage of a feudal system was the lack of professional infantry, especially in countries such as Hungary which could not source this infantry from cities. Further, even in a banderial system, a major offensive required the presence of the king, as it was the king to whom the lords were beholden; it was very difficult to convince any lord to obey any other lord. Partly because of this, southern marches of the kingdom were under the authority not of large magnates, but rather of royally appointed officials. While they were politically more autonomous than the remainder of the kingdom, being outside the direct authority of the crown, militarily they were subordinated to the holders of royal offices.

In a federal state, each federal unit will have its own army which will vary in strength based on the size of the federal unit. However, if a state is centralized enough, then regions may be set up in such a way to provide for recruitment of standardized units. In the Byzantine Empire, major themes all had armies which numbered in multiples of 5,000, as that was the size of the standard division of the army at the time when the first themes had been formed. Another example are stem duchies of Eastern Francia.

A fully professional army does not need to reflect the society it sprung from at all, and so can have the most varied organization, but this organization will be incredibly complex as it aims to recreate the society itself from bottom up. While it is good at set-piece battles, a standing professional army is not a good choice for guerilla warfare and protecting areas against raids. The number of subdivisions will also increase as the army is more focused on maneuvers in combat – that is, each unit will be subdivided into fewer units. A unit of a 1,000 men had two organizational levels in the Macedonian army (file and syntagma), three levels in a Roman legion, and four levels in a Byzantine theme.

In a professional army, each unit will have a commander (CO) and an assistant (XO). Armies less professional than those of Rome (and Byzantium) generally did not develop formal military ranks above the voice-command level (circa 100 soldiers), but leaders were assigned ad-hoc, typically based on the prestige of the noble’s title. In a professional army, a unit of 5,000 or 10,000 men might have a permanent commander and permanent structure.

A society might also deploy several types of military in one. The 15th century Kingdom of Hungary had an even greater array of forces: full-time professionals in the form of mercenaries (which would eventually become the Black Army), part-time professionals of feudal banderia, the select levy of militia portalis, and the general levy of the generalis exercitus. Auxiliaries and mercenaries will also be used to provide types of troops which were foreign to the country’s social and economic structure: such as Balearic slingers in the Roman army, and horse archers in medieval European armies (such as Turcopoli in the armies of Outremer, or Szekely and Cuman light cavalry in 15th century Hungary). These typically formed their own units under their own commanders, fighting in the manner of warfare which they had passed down the generations. But if the core of the army was multi-ethnic and multilingual it could spell disaster, as with the Byzantine army at Manzikert.

In terms of overall leadership, a more personal style of leadership — as well as greater importance attached to warfare in terms of prestige — make it more likely that political leaders will be militarily active. But this also makes it more important that leaders will be militarily competent, which can be taken care of through education. Depending on the cost/benefit calculation – the potential costs of a military defeat versus benefits of being seen leading an army – the ruler may or may not choose to lead armies in person. In some cases, a ruler may also formally lead an army, while actual command is given to a trusted general. But if the general becomes too trusted or powerful, it may cause the ruler to slide into relative irrelevance. All of this can be seen from the career of John Hunyadi.

There are other solutions as well, but these are very problematic:

What is the purpose of your army? What are goals of the political leadership?

How does the army ensure security? How is it organized?