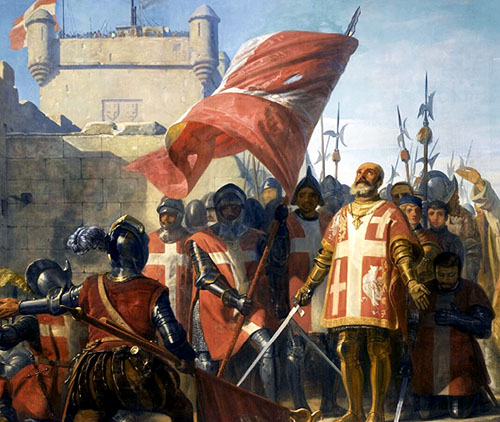 In Antiquity and early the Middle Ages, the main weapon was the spear. Only a few exceptions appeared: Roman legions, which used javelins instead, and Macedonian pike phalanx with its sarissa. In the later Middle Ages, the main weapon could be a pike or a polearm (such as polehammer, poleaxe, halberd etc.), before the pike made its return in early modernity. Ranged weapons were not used to cause casualties, but rather to inconvenience the enemies and break up their formation.

Weapons and tactics will adapt to each other, as well as to the terrain and the enemies faced – but adaptations will be done within the boundaries of the society. A society without a significant tradition of horse archery will not counter horse archers with their own, but rather with foot archers. Horse archery was important for nomadic societies, because they could not afford the casualties which resulted from the shock and attrition tactics of the settled societies.

Weapons and armour likewise have a relationship, but since armour is the more difficult to produce of the two, it is developments in armour which typically drive the adaptation of weapons, rather than the other way around. As mail became more prevalent, weapons adapted too – swords and spears became pointier, as did arrows, and the couched lance technique replaced the spear thrust. With the development of plate armour, the main weapons became warhammers and various polearms – pikes, pollaxes, polehammers and similar. At the same time, shields were mostly discarded as plate armour provided superior protection at less weight. Cavalry lances also became much heavier, and the lance arrest was added to the breastplate in order to increase the energy transferred during the clash.

Mail and plate armour were used primarily amongst melee-centric cultures, as plate armour especially is good at absorbing blunt force trauma. Lamellar armour consists of many small plates, which offer better flexibility and also better protection against piercing damage. At the same time, the fact that it has many more gaps than either mail or full plate armour is not as important if both sides are engaging in primarily missile-centric combat.

Offensively, pikes were utilized primarily by full-time professional infantry such as Swiss mercenaries and other 16th century infantry. During the 15th century, polearms such as pollhamers, poleaxes and halberds were used. Hussites and Hungarians replaced the function of a pike block with a wagenburg, which allowed polearm and crossbow infantry to oppose feudal cavalry.

In field battles, cohesion is the key. There never were cases of a random rabble charging other random rabble. Instead, battles were fought in ordered formations, even when it comes to cavalry. Missile fire and cavalry charges were both used first and foremost to disrupt the formation and its cohesion – even with heavy cavalry, casualties were relatively limited on both sides for as long as neither side lost cohesion. Missile fire was used to cause injuries, exhaustion and psychological pressure, causing the disadvantaged side to arrive at hand-to-hand combat tired and out of order – and the side with better order typically won. As for cavalry, heavy cavalry charges were used to cause a collapse – psychological or physical – at a single point, turning it into a progressive collapse by “rolling up the line”. Overall, contests depended on training, morale and terrain.

Heavy cavalry had to be extremely disciplined – and knights (with the exception of 15th century French) typically were exactly that.

Usaban ibn Munqidh complained that “Of all men, the Franks are the most cautious in warfare”. This was essential, as heavy cavalry had to charge at the right time, against the right target, and maintain tight ranks throughout. Knights could be recalled from charge and reorganized for further assaults, as well as use tactics such as feigned flight and outflanking. By the 15th century, heavy cavalry units were in fact organic combined-arms regiments, including lancers and mounted crossbowmen. When problems did happen, they did so almost exclusively due to commanders – there are next to no accounts of Western infantry collapsing in disarray on contact with disciplined Eastern troops such as Janissaries.

Against like opponents, typical deployment was with cavalry on the wings and infantry in the center. But when facing nomads, infantry would form a square or else a wagon fort. Thus they would create essentially a field fortification which would prevent the army from being outflanked as well as providing a space of refuge against missile cavalry. The prerequisite however was the high number of missile infantry. If they were present, horse archers could either lose a missile duel against infantry, or charge infantry which would result in them being engaged by infantry at close quarters and then crushed by the heavy cavalry.

Societies which faced repeated wars against nomadic horse archers developed sophisticated and cautious combined-arms tactics. Good examples of such are Crusader states, Byzantines, Hungarians and Poles, as well as the Chinese. Crusaders in Outremer also faced the problem of a limited population pool, and thus typically opted for defensive tactics, destroying Muslim armies when they broke apart in pursuit of plunder. In open battle, as already described infantry square tactics were heavily used.

When it comes to fortress assaults, they were generally only done by professional armies. The reason is obvious: anyone can do some form of a siege. But a successful assault requires the cooperation and coordination of heavy infantry, archers, artillery and engineers. Even then it was likely to fail, meaning that it was done only as a last resort. Negotiations, infiltration and bribery were typically tried first. If these were not successful, the target would be bombarded by artillery for extended periods of time followed by an assault. The assault itself had to involve coordinated efforts of artillery, infantry, engineers, sappers. Decrennelating the wall and undermining its foundations were common approaches. More organized armies would deploy weapons such as trebuchets and siege towers – counterweight trebuchets being the first siege artillery capable of reliably bringing down curtain walls. But only incredibly well-organized and large (which is to say, Roman) armies would build something like access ramparts. Overall, the complexity of the assaults meant that amateur armies such as Greek hoplite armies could not perform them effectively. Less professional armies opted for simple investment or, more often, raiding with the aim of destroying the opponent’s economy.

If magic is available, a lot of the above is likely to change. If there is no defense against magical attacks, infantry will disperse or else deploy in thin lines, making it more vulnerable to cavalry. Meanwhile, if magical defences are available, an army may deploy under protective umbrellas – staying safe but limiting its maneuvering options. Healing mages may be deployed in field hospitals or on the frontlines, or both, depending on the nature and limitations of magic. Spells may affect the battlefield as such, rearranging terrain. Teleportation spells may allow for quick tactical and even operational movements and ambushes, and ambushes may also be enabled by invisibility spells. Illusion magic could be used to mislead the enemy on both a tactical and strategic level: World War II provides good examples of intelligence operations with similar effects, where misleading the enemy as to the deployment of several key units or even a single person could help win a battle or even a campaign. Illusion and teleportation magic alike would also facilitate guerilla warfare.

Flying units such as griffins or dragons could likewise be used for scouting, reconnaissance, tactical air strikes, air superiority and aerial resupply – which of these roles will they be used for will depend on their limitations and nature.

What weapons does your army utilize? Does it use magic? Does it use weapons which are not magical but would appear as such to less advanced societies? Which tactics does it utilize?