This article is by by Tina Hunter, and is presented by Worldbuilding Magazine. 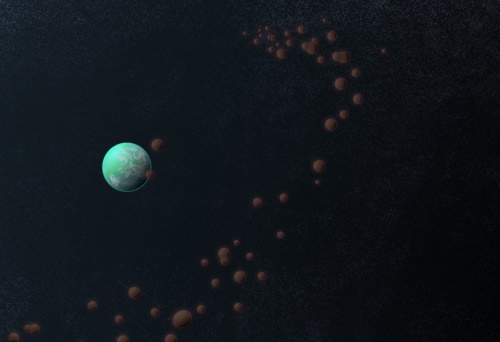 Building a world from scratch is no small feat for any worldbuilder. From culture to characters and everything in between, the geology of the planet your story lives on can sometimes feel secondary. That shouldn’t be the case, however, as your geology can add a new layer to your world and story building. Almost like another character, your planet can be full of flaws, benefits, and dangers that enhance your story. I’ve found that the easiest place to start building a whole planet is to look at the strange and wonderful planets already out there being studied: exoplanets.

2019 marks a strange phase for the study of exoplanets. So far we have already discovered 49 potentially habitable planets, and scientists have extrapolated that we could have 40 billion in our galaxy alone. These discoveries are thanks to the deep space Kepler and K2 telescopes. Unfortunately, these telescopes have recently retired. Our new space telescopes, TESS (which launched last year) and JWST (which launches in 2021), find exoplanets using transit photometry, meaning they wait for a planet to cross in front of its star and take measurements from the dip in light. Therefore, if any of these planets have an orbit similar to Earth’s, we’ll be waiting at least a year or two before we have a confirmed find.

So what is an exoplanet enthusiast supposed to do in the meantime? Many of them have been combing through the data we already have to create better guides and models for the types of habitable planets we might find out there. This is perfect information for a fictional planet builder.

While no one has come out with an actual guide yet, Sarah Rugheimer, an astronomer and astrobiologist at the University of St Andrews in Scotland, and her colleague Lisa Kaltenegge are pretty close. They took the data from different geological epochs in earth’s history (as well as surface features, cloud cover, and star type) to come up with different kinds of planets we might find out there.

There is also the climate model created by Max Popp, an associate research scholar at Princeton University in New Jersey, and Siegfried Eggl, a Caltech postdoctoral scholar at NASA’s Jet Propulsion Laboratory in California. They studied how the placement of a planet inside the habitable zone can dramatically influence its climate.

It took me a while to sift through the data, but I did my best to break down just the human habitable planets. These exclude all the planets without a breathable atmosphere even though in a science fiction novel they could be terraformed.

First, let’s talk about star types. The modern classification system for stars is the Morgan–Keenan (MK) classification with a luminosity class attached. This breaks down the star into a spectral class based on color & heat (O, B, A, F, G, K, M, and D) and then a numerical value to break down the heat in each class (0-9 with 0 being the hottest). This resulting letter and number form the star’s spectral type. We can’t forget about the size of the star, which we can denote using the Roman numerals 0 through VII. Zero would give us a hypergiant and VII a white dwarf.

For example, our sun’s full classification is G2V.

So why is this important? Well, the type of star can have a big influence on the climate of the planets that orbit it because each star type heats planetary atmospheres differently. This causes different concentrations of gases like water, oxygen, methane, and ozone. Considering we humans require around 20% oxygen to breathe, this is an important statistic to nail down. Plus, oxygen is a key factor in determining if plant life is present since it’s unlikely for a planet to have free oxygen without life.

Thankfully, this study only focused on FGKM stars (white, yellow, orange, and red stars) as they are the most common and most likely to produce habitable planets, so I will do the same.

Rugheimer and Kaltenegge’s data showed that earlier epochs have weaker atmospheres than our modern Earth because of lower ozone concentrations. Without the higher ozone in these early epochs, planets around hotter stars would have less water and methane, causing these atmospheres to be cooler. This is the opposite for the modern epoch where the hotter the star, the hotter the planet. Water and ozone are also present in higher concentrations around cooler stars even in earlier epochs.

They also gave points of comparison for reflectivity because oceans, continents, and clouds all change the amount of light bouncing off a planet. Since an exoplanet will be tiny in the telescope, its reflectivity can tell future astronomers what kind of planet they are looking at. For us, it gives us a better picture of what the surface of the planet might look like.

In their 2017 study, Rugheimer and Kaltenegge write, “due to the increased stellar flux at shorter wavelengths for an F or G type star, Rayleigh scattering is much more pronounced for F and G stars than for K and M stars”. Rayleigh scattering affects how light is scattered by particles which gives us our blue skies at short wavelengths, and red-orange sunsets at long wavelengths. This could mean mean that hotter stars are more likely to have deep blue skies, and this tendency shifts towards light blue, green, and yellow (possibly even orange) as the sun in question becomes cooler.

Also known as the “habitable zone”, each star has an ideal range of orbital distances where a terrestrial planet is most likely to have liquid water on its surface. Having liquid water is the key there. Earth sits closer to the inner edge of our sun’s habitable zone, with Venus sitting outside the zone and Mars on the outer edge of it.

When a habitable planet is closer to the star, the global surface temperatures stay almost constant. This is thanks to the amount of water vapor that would stay in the atmosphere, acting as a regulator to keep the climate comfortable. When a habitable planet is further from the star, it would have a lot more variation in its average surface temperatures over a year, due to the decreased amount of regulating water vapor.

Even star clusters—two or more stars that orbit each other closely—have a habitable zone. In that case, the habitable zone depends on the distance from the center of mass that both stars are orbiting. To make things even more complicated, a planet around two stars would not travel in a circle; instead, its orbit would wobble because of the gravitational tug-of-war between the two or more stars.

If you are an avid reader, or just have an excellent imagination, you may notice there are a few planets from fiction and elsewhere missing from the above list. Does that mean they aren’t possible? Of course not. This was just one interpretation of the data I had. Even though the data is from two reputable studies, with 40 billion possible habitable planets in our galaxy, there are sure to be some planets that don’t fit neatly into these rules we’re just now deciphering.

For example, while the moons of gas giants that sit in the habitable zone would have similar classifications to their standalone planet counterparts, there would be unique features to consider as well. Such as possibly having tidal pressures from being tidally locked, the gas giant’s potential magnetic effect on the planet, what kind of day and year cycles they have. There may also be planets out there that are close to Earth-like with early biospheres or decaying ones but would require the aid of technology to be habitable for humans. There could be planets with uninhabitable surfaces that have extensive cave systems allowing a thriving underground biosphere to emerge. Or water worlds, where the surface is covered entirely by a single ocean that could be hundreds to thousands of kilometers deep. Tidally locked planets have multiple variations as well, ranging from a scalded side facing the star with water on the other side to frozen on the side facing away from the star and water on the side closer to it. For these planetary types, where they sit in the habitable zone can have an even greater impact on their potential climate and geology. The most important thing to remember is that for a planet to be deemed habitable, only a tiny portion of it is required to support life.

The types of habitable planets listed in the index are a great starting point for you to build your fictional world, and it may also offer up new options you might not have considered. Will you build an ice planet with green skies, or maybe a jungle planet with green-blue skies? What kind of plants and animals will thrive there? What kind of culture would develop? What kind of story will emerge? Building solid geology for your story means there are so many more obstacles you can pit your characters against and places to invoke awe and wonder in your reader. 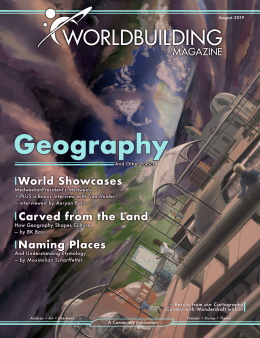 Worldbuilding Magazine is a bi-monthly publication which covers a variety of worldbuilding topics. This article was featured in their August 2019 release: Geography. You can visit their website to read full issues and subscribe for free here. Make sure to join their Discord or follow them on Twitter for the latest news. Mythic Scribes is a proud partner of Worldbuilding Magazine.

This article is by Tina Hunter, who you can follow on her website. Artwork for this issue is by Adam Bassett, who you can find on his website.

This is a great article, I have been doing research and I found the best thing for me was the Youtube channel Artifexian. He has a worldbuilding playlist with 58 helpful videos.