This article is by B.K. Bass and is presented by Worldbuilding Magazine. 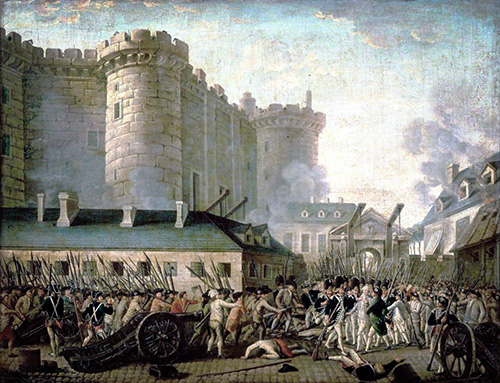 When one considers a government, it’s only prudent to assume they have a number of buildings that serve practical purposes in their administration. Some have become landmarks—symbols of a nation’s identity. Many of them stand for philosophical ideals, cultural heritage, or as bastions of authority. Among these are the White House in America, the Kremlin in Russia, and the Forbidden City in China. Out of these landmarks and others like them, one could argue that few have been as infamous a symbol as the Bastille in Paris, France.

Construction on the Bastille began in the mid-fourteenth century, under the direction of King Charles V, during the Hundred Years War. Intended as a defensive structure against English attacks, it was originally designed to serve as a gatehouse in the city wall of Paris.[1] The structure was initially named the Chaste Sainte-Antoine. It was not completed until 1382 CE, under the reign of King Charles VI. When complete, the name was changed to the Bastide—Old French for “The Fortress”—which evolved into the moniker that we recognize today: the Bastille.[2]

The finished building more than lived up to its new name. It consisted of eight towers, each thirty meters tall and connected by walls three meters thick at the base. It was also surrounded by a moat, and beyond this was a series of secondary defensive structures. The interior of the Bastille contained two courtyards, officer quarters, barracks, an armory, dungeon cells, meeting chambers, a kitchen, and a chapel. The height of the towers offered soldiers a clear view in every direction, and they were all linked to one another by way of the curtain walls upon which troops could be shifted to defensive positions as needed.1 Over the next two hundred years, the Bastille continued to serve as a military fortification under both French and English rule.

During the first half of the seventeenth century, during the reign of King Louis XIII, the Bastille was converted to a prison for upper-class enemies of the crown, many of whom were charged with the crime of high treason.

While the judicial system in seventeenth-century France was subject to royal decree and didn’t consist of a codified national set of laws, there were still layers of jurisdiction that established a certain due process in political, legal, and criminal matters. A system of government officials, courts, and jurists worked to interpret various local traditions, royal decrees, and historical precedent to expedite legal matters in a systematic fashion.[3]

Those who found themselves in the Bastille often were not afforded this due process, or even an opportunity to speak in their own defense. Instead, the king needed only issue a letter de cachet—a letter of royal seal—to have a perceived enemy of the crown detained indefinitely. Many of these detainees were educated individuals who adopted ideals of the burgeoning Age of Enlightenment and spoke out against the power of the monarchy. Occupying the old officer’s quarters from the structure’s days as a military fortress, many of the prisoners stayed in spacious apartments and were allowed to bring furniture, books, and other amenities from their homes with them.2

As time passed and the common citizenry began to speak out against the crown, more and more of them were interred in the old fortress’ original dungeons—small subterranean cells that were dark, damp, and infested with all sorts of vermin. By the 1780s, the fortress-come-prison was overflowing with detainees, as well as confiscated books and pamphlets that were considered to contain ideas which countered the status-quo. These squalid conditions, combined with the fact that the king could decree any person be imprisoned without any recourse or representation, led the Bastille to become a symbol of tyranny to the people of France.2

During the reign of Louis XVI, France was in the grip of a crushing economic crisis. The primary legislative body at the time was the Estates-General, hosting representatives of the clergy, the nobility, and the commoners. Because the representation of each of the three estates was divided equally, the commoners often saw themselves on the losing side of any vote due to the clergy and the nobility both voting in opposition. Seeing that this system would not bring about reforms that the common people were clamoring for, many of those commoners who made up the Third Estate formed their own organization on June 17, 1789. This new body became the National Assembly, initially focused on creating a new constitution for France inspired by the recently liberated United States of America.[4]

By that July, civil unrest had grown to a boiling point. The National Assembly spoke out for the common people, but the opposition was firmly entrenched in their seats of power and proved to be unwilling to negotiate any compromise. Public demonstrations began on the 12th of July, resulting in violence between the protestors and the military.4

On July 14th, 1789, the revolution began. By this time the Bastille was nearly empty, and only housed seven prisoners. In the days prior, the military moved the city’s garrison to the old fortress, along with 250 barrels of gunpowder, cannons and small arms. On the morning of the 14th, citizens gathered around the Bastille—which had become such a symbol of royal tyranny—demanding that the weapons within be surrendered. Negotiations continued into the afternoon, and eventually violence erupted. Gunfire was exchanged for several hours until the garrison commander surrendered, seeing mutual slaughter as the only potential result of continued violence.4

The prisoners were freed and the weapons taken by the mob. The revolution was born in the shadow of tyrants cast by colossal stone towers.

There’s two major things we can learn from the history of the Bastille for use in our worldbuilding. First, one of the most obvious takeaways comes from the changes in the purpose of the structure over time. It was originally a fortress, then a prison, and finally a garrison again—if only for a short time. When developing key structures to place in our own worlds, we can draw inspiration from this and take a less planned approach to the purposes of our buildings. In an ideal world, every structure is tailor-made for its purpose. In reality, this isn’t always the case. Sticking to Paris for our inspiration, we need only look to the Louvre for another example. This structure was also a fortress first, then a palace, and finally a museum. In one of my own series of books, I have an orphanage that was originally a roadside inn on a main avenue. As the city grew around it, it found itself in a secluded courtyard where it was overlooked by merchants and travelers alike, and so the owners found a new purpose for it.

The other key takeaway is how a building can become a symbol based on what happens there, and more so the actions precipitating what happens there that it represents. The Bastille becoming a prison, in itself, didn’t make it a symbol of tyranny. The fact that people were imprisoned outside of the usual legal system by decree of the king is what made it so. There had to be an act of tyranny for it to become a symbol of tyranny. I would assume that few people hear the word “prison” and automatically associate this with an autocratic regime. Replace that with “gulag” however, and the idea of political prisons brings to mind the oppressive authoritarianism of the Soviet Union in the early and mid 20th century. It’s not always the purpose of the building that makes it a symbol, but rather the methods in which that purpose is executed—pun very much intended.

When considering the architecture for our worlds, it’s often quite appropriate to plop down something that’s tailor-made for its purpose. From the king’s castle to the roadside inn, many buildings maintain a consistent role for their entire use. Others evolve.

The Bastille is a great example of a structure that not only changed over time through physical modifications, but also in name and purpose. From the defensive fortress to the political prison, the building evolved along with the conditions of the world around it. If we look at other structures throughout history, both in the world at large and also in our local neighborhoods, we’ll find many that were built with one purpose in mind and changed to suit other needs. This need not be as drastic as fortresses or political prisons, however. Perhaps a warehouse was converted into a school, or a business built into a former home. With the expense in both material and manpower required to build a new structure, often it’s more pragmatic to repurpose an old one.

When considering the structures in your own world, you can add rich layers of history to the setting by showing evidence of change over time—and in the process give those lifeless wood and stone edifices some character of their own. 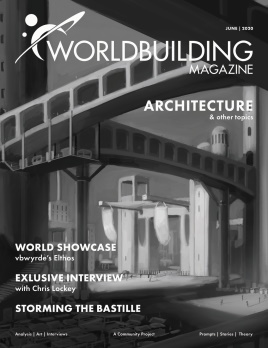 Worldbuilding Magazine is a bi-monthly publication which covers a variety of worldbuilding topics. This article was featured in their June release: Architecture. You can visit their website to read full issues and subscribe for free here. Make sure to join their Discord or follow them on Twitter for the latest news. Mythic Scribes is a proud partner of Worldbuilding Magazine.

B.K. Bass is an author of science fiction, fantasy, and horror inspired by the pulp fiction magazines of the early 20th century and classic speculative fiction. He is a student of history with a particular focus on the ancient, classical, and medieval eras. He has a lifetime of experience with a specialization in business management and human relations and served in the U.S. Army. B.K. is also Editor-in-Chief of Kyanite Publishing and the Kyanite Press journal of speculative fiction, and the Writing Department Chair for Worldbuilding Magazine.

You can learn more about B.K. Bass at his website.

I enjoyed the article. A good read. There is a part that seems to be garbled, however. Here is the graph — with the problem part in bold and underlined:

As time passed and the common citizenry began to speak out against the crown, more and more of them were interred in the old fortress’ original dungeons—small subterranean cells that were dark, damp, and infested with all sorts of vermin. By the 1780s, the fortress-come-prison was overflowing with detainees, as well asopald confiscated books and pamphlets that were considered to contain ideas which countered the status-quo. These squalid conditions, combined with the fact that the king could decree any person be imprisoned without any recourse or representation, led the Bastille to become a symbol of tyranny to the people of France.2

Could this be corrected? Thanks.

There is a part that seems to be garbled, however.

Thanks for catching that. The error has been fixed.