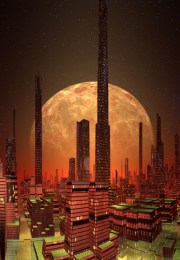 This article is by Michael Cairns.

Fantasy is an expansive genre in which the reader can be transported to far-off lands. Urban fantasy does something quite different, laying the fantastical world over the one in which we live.

This can be a tricky thing to get right. Too much fantasy and the realism can be lost. Not enough fantasy, and the wonderful sense that anything can happen disappears, and the story becomes humdrum.

Following the writing and copious editing of my Urban Fantasy Trilogy, the Assembly, I’ve identified a few pointers as to what works and what doesn’t. Here are my top five tips to help you blend the real with the fantastical, and create a world your reader will become lost in.

If you want your reader to buy into your world, it’s imperative that they know from the outset the following things:

*Slough is the original home of ‘The Office’. It is a terrible place, a place of traffic lights and industrial parks, where fun goes to die, and everyone else runs away from.

If you aren’t sure, ask yourself: Have you made it easy for the reader to imagine the magical world existing in tandem with the real? The less they have to question how the two things fit together, the more involved they will be in the story.

In Harry Potter, much of the action takes place at Hogwarts. This is the safe place, not so much for the characters, but for the author. Here, she doesn’t have to worry about pesky muggles turning up and people being secretive; she can throw the magic around and have broomstick battles galore.

Having a safe place within urban fantasy isn’t essential, but it gives the author a place to build characters and relationships, without worrying about the balancing act that occurs throughout the rest of the story.

Many a fantasy world is enriched with wonderful names and phrases, and Urban fantasy can be just the same.

As well as the pure enjoyment, giving your fantastical characters their own language can be very useful. It enables you to clearly label those parts of the story that take place in secret through the words used in the dialogue. Similarly, it makes signposting the changes into the real world easy, simply by changing your character’s use of those same words.

Also, let’s be honest, having your own language is just plain cool.

4. Create the Everyman (and use him)

One of the things that work so well in Sam Raimi’s Spiderman trilogy is the use of the everyman, the innocent bystander who reacts just like the reader would.

When faced with a flying beetle the size of a house brandishing a flaming sword and singing an Irish Lament, our hero may well shrug, whip out the sword of Hrannnthattt, and take a swipe. However, without the reaction of the terrified onlookers, we may as well be in a normal fantasy.

From the reader’s perspective, the lack of the everyman will jar.  They may read this sort of book because they like the idea of Slough being destroyed by giant half-lizard, half-ape lions. If Slough is simply a sketchy backdrop with no reality to it, no real people reacting in real ways, then the impact is lost.

5. Always Plan for the Aftermath

Should the aforementioned half-lizard creatures rampage through the streets of Slough, what happens next, (aside from the national day of celebration of course)?

Urban fantasy has an impact on the characters, but also on the world around it. Many books narrow their focus and affect just a few people, but if you’ve gone epic, like I did, make sure you show the effects of your hero/villain’s deeds on the rest of the world.

So there you go, a few things to be thinking about when writing that ‘terrible beasts attack Slough’ novel you’ve been dreaming of for so long.

What are your top tips for creating an urban fantasy world?

Chocoholic Michael Cairns is the author of the real-world epic fantasy trilogy, ‘The Assembly’. Book One, ‘The Spirit Room’, is available on Amazon now.

His science fiction adventure series ‘A Game of War’ is also available from all good e-retailers with part one, Childhood Dreams, available for free download from cairnswrites.com.