This article is by M.S. Jenkins, and is presented by Worldbuilding Magazine.

The world is a dangerous place, especially for Roman politicians, Hellenistic kings, and babies; ironically all for the same reason. It may be hard to believe, but poison and venom use is archaeologically about as old as human society. Research suggests that early humans were on a quest to improve their ability to hunt animals and combat their rivals and this led to the use of both poisons and venoms to that end. Originally, one or two individuals in a tribe would have this secret knowledge which in time directly led to the role of witch doctor or medicine man. As society developed larger and more complex social structures and began consolidating more authority in government, the use of poison and venom to remove leaders and the antidotes fabricated to protect them became an increasingly important element in recorded history.

Mithridates was a Hellenistic king who lived in the area we now call Turkey, from around 114 to 63 BC, and was obsessed with the fear of being poisoned by his enemies. He used condemned criminals as guinea pigs for his research, and also applied small doses of poison to himself attempting to build an immunity. Ultimately, he developed a compound known as Mithridatum. Unfortunately, his built-up immunity to poisons ended up being a curse rather than a blessing, as he failed to commit suicide by poison when his country was invaded by Pompey, instead he died on the swords of his soldiers whom he ordered to kill him.

Roman politicians were in danger of being poisoned as early as 331 BC, and this method of assassination was not uncommon at the dinner table, whether in a common eating area, or in the home. Francois P. Retief and Louise Cilliers say in their article on poisonings in ancient Rome that, “A growing incidence of poisoning is recorded in the 1st century AD, which reached an alarming peak during the reign of the Julio-Claudian emperors,” and that  “During the late 1st century AD Juvenal described the moral decay of the elite and in his satires claimed that poisoning for personal benefit had become a status symbol.” The reason for these poisonings varied based on the motives of those involved, but the frequency with which people were ingesting poison had a direct effect on the development of antidotes and cures. A simple result of supply and demand.

Today, intentional poisonings are relatively rare compared to that of ancient times. The FBI homicide data for 2012-2016 indicates that only fifty-three individuals have died from intentional poisoning over four years of criminal cases, though accidental deaths by poison are much higher. The reality is that many of the ancient poisons have transitioned from weapons intended for murder to tools that make our lives easier. Products used in industry, agriculture, and (on a much, much more limited basis) in the home contain some of the same substances that were once sold by witch doctors and apothecaries alike. Though ancient poisons have now been long established in many productive applications, venom works on the human body in different and very specific ways, and is only recently on the verge of transitioning into the medical field beyond the creation of antivenom.

Though it differs from poison, venom’s application of nudging individuals toward the potter’s field is roughly the same. Venom, once it has entered the body, works to break down organic structures and is grouped into one of four general categories: proteolytic, hemotoxic, neurotoxic, and cytotoxic. Proteolytic venom breaks down proteins, hemotoxic venom attacks the heart and cardiovascular system, neurotoxic venom attacks the nervous system and the brain, and cytotoxic venom attacks cells in the immediate area of exposure. It should be noted that naturally-found venoms are a chemical cocktail of the above categories in addition to carrying many other substances that cause a wide variety of effects on the human body. For example, the black widow spider’s venom is both a neurotoxin and a cytotoxin, while Mojave rattlesnakes exhibit the stereotypical hemotoxic venom common to other rattlesnakes, but also carry a neurotoxic substance with it. In spite of all the different effects venom can cause, the path any lethal venom takes to break down its victim is quite simple. Either the nervous system is attacked causing asphyxiation by paralysis of the respiratory system or damages to tissues or organs causes internal bleeding and death by blood loss.

Venom has developed in animals for both defensive and offensive purposes. We can see this manifested in a variety of iterations. A bee sting literally kills the venomous insect to cause mild irritation to its victim. On the other extreme, the ocellated carpet viper—who has a higher body count than all African species combined—can kill a human using its venom in less than an hour. When worldbuilding creatures that make use of venom, keep in mind that it must have utility for the creature that bears it, either for defense or for predation. The platypus is weird enough on the outside, but the venom stored in the spur on its leg has a very specific purpose which is to deter predators from eating it. Animals developed venom for various reasons and your own venomous creatures should reflect this truism.

If you’re still confused about the difference between poison and venom, Stacy Venzel explains it this way, “If you bite it and you die, it’s poison. If it bites you and you die, it’s venom.” Poisons and venom function in a similar fashion—introducing toxins into the body from an outside source—though their delivery method and effect vary widely. They can enter the bloodstream through open wounds or on contact, they can be absorbed through ingestion of liquids or solids, they can even be airborne. There are a lot of creative ways to ruin someone’s life with toxins and just like every kind of intentionally inflicted suffering, the only limiting factors are your moral compass and imagination.

Adding Toxins Into Your World

Populating your world with toxins of both varieties makes for some interesting storytelling, but keep in mind how common poisoning and venom use are. The more common, the more likely an antidote or antivenom exists, as people in positions of power will employ others and seek themselves, like Mithridates, to create antidotes and antivenoms for protection. The prevalence of poisons and venom also influence the market, creating jobs for people such as that of the modern toxicologist, but also carving out a niche for those who deal in illegal substances. Depending on what your world has to offer, these doctors, merchants, and criminals could produce some very interesting things. Some harmful and others helpful.

Here’s a practical example: Let’s say there’s a decently common lizard called a Xallin iguana that lives in your fantasy setting that wizards and spellcasters really hate. Spells don’t work on them, or rarely do, and they’re a huge nuisance because they like to get into places they don’t belong and eat spell components. By accident, it’s discovered that one of their organs can be dried and ground down to powder and added to powdered acorns, a fiddlebender spider’s web sac, and a little silver nitrate to make a liquid that immediately prevents any spellcasting upon contact with the skin or contamination of the blood. BOOM! Anti-magic poison.

The prevalence of this kind of poison would first cause an already agitated magic-using population further frustration, but also cause changes in fashion among spellcasters. This change would probably involve wearing more liquid resistant clothing like gloves, cloaks, maybe even leather armor, sacrificing mobility for safety. Wizards and spellcasters might spend time hunting the lizards attempting to kill them off, but poisoners and other ne’er-do-wells would be hunting them as well. Undoubtedly, a reduced population of lizards would have environmental consequences that might cause an overabundance of some other pest, or the death of something helpful. The Xallin iguana’s subsequent endangerment would probably cause a shift in the economy related to the lizard’s use, increasing the cost of such a poison, and also the fashion change for protection against it. Perhaps it would also result in laws preventing the development of such poisons. These laws would likely increase the traffic of such a substance on the black market, which then would have the ability to use the poison to gain an advantage over the wizards in their illegal activities.

Let’s take it in another direction. Venom especially is starting to show up in experiments for medical purposes including dissolving blood clots, breaking down plaque buildup in arteries, fighting some forms of cancer, bronchial asthma, Parkinson’s, Alzheimer’s and even a substance that could overturn morphine as a painkiller. So, let’s return to our example of the Xallin iguana. Say you substitute the acorns for some of the famous loam bananas of the Flaterton Moors and the silver nitrate for distilled water. The mixture is then imbibed. BOOM! Potion of magic protection. Sure, it gives you a really bad stomach ache, leaves a sausagey metallic taste in your mouth, and creatures from other dimensions whisper into your ear about something called Azathoth, but it protects you just long enough to remind the wizard in your party that the best class is, and always has been, the rogue.

Venom and poisons existed in nature long before humans started using them for personal or professional purposes. This should be considered when thinking about adding toxins into your world, because it could work as a powerful narrative device, create a backdrop for realistic conflicts, add some bitter flavor to your world, or simply act as a nice set piece for a great scene. Don’t forget that as our society changed, these toxins began to work for us in different ways and are still having direct effects on industrial practices, economic production, and medicine. Knowing how venom and poisons work and have been used historically will give you a great foundation on which to develop your own unique concoctions for use by the king’s cupbearer and the destitute peasant, the wealthy merchant and the desperate thief, the kind apothecary and the vile assassin. 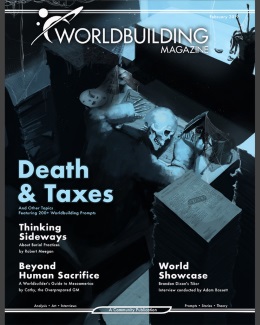 Worldbuilding Magazine is a bi-monthly publication which covers a variety of worldbuilding topics. This article was featured in their February 2019 release: Death & Taxes. You can visit their website to read full issues for free here. Make sure to join their Discord or follow them on twitter for the latest news. Mythic Scribes is a proud partner of Worldbuilding Magazine.