This article is by K.S. Crooks. 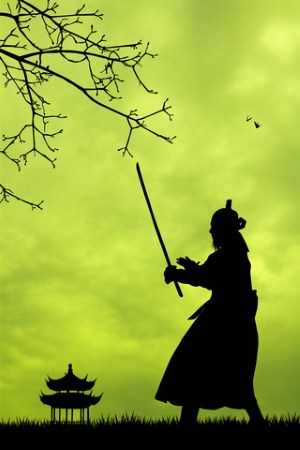 I began my life-long journey with martial arts at the age of eight, when my mother enrolled me in my first judo class. Being a very small boy, she thought that it would give me strength and confidence. It gave me those, plus much more.

In high school I took up wrestling, becoming city champion and provincially ranked. During university I went back to Judo, started Jeet Kune Do and Karate. Martial arts became one of the staples of my life.

When I began writing and later finished my first novel, I began seeing similarities between the process of writing and that of performing martial arts. In the various posts and comments made by others, I saw many of the same notions there as well. Mainly I refer to the mental aspects more than the physical; however there are some effects on the body that occur in both situations.

Regardless of the form of martial art being learned, there are a few standard practices. This is because every human body has the same basic design. There are standard ways to breath, move forward and back or side to side, maintain balance, and how to fall.

In some of the martial arts there are also sets of prearranged solo offensive and defensive maneuvers called katas. These formations have the person imagine they are engaged in a fight with multiple adversaries at the same time. The farther along in your training, the more specialized they become, reflective of the person’s greater skill.

These basics must be learned and honed, to the point that they never need to be thought of during exercises or combat. The same applies to the act of writing. We learn and practice the basics of spelling, grammar, and sentence structure before progressing to more complicated tasks. Without these nothing written would make sense.

None of us put any thought into using a capital letter at the beginning of a person’s name or using ‘he’ and ‘him’ for a male and ‘she’ and ‘her’ for female. Speak with a 3 year old or look at the writing of a child in grade 1, and you will see that these things take concentration in the beginning.

This needs to happen otherwise everything we write would take forever. It would also cause our brains to use a tremendous amount of energy on routine aspects. When the basics are automatic it allows one’s mind to be creative.

Each of us has our own particular strengths and weaknesses. Some are fast or strong or flexible. Whatever you are good at is where you should make your start. This allows you to build some confidence and develop a routine.

Once on your way, make a habit of training your weakest areas first and more often. If you have a strong right cross, then work on you left first and more frequently. You need to work your weak areas in greater amounts to catch up to your strengths, which will also be improving. Practice makes permanent.

In your stories you may be great at writing the narrative; however, the dialogue is never engaging or believable. Whenever you come to that area of your story, one method is to write various versions of the dialogue. Make incarnations that are serious, funny, light-hearted, ominous, straightforward, or full of metaphors.

Once you have several versions choose the tone that best fits and write multiple versions, kicking your thesaurus into high gear. This is where you determine what particular words your characters would actually use.

If your weakness is in setting the scene, when your characters reach a new location describe everything about the place. Describe the weather, terrain, vegetation, animals, scents, sounds, colours, etc. Get yourself into the habit of writing down everything you envision in your head. You can whittle down the description afterwards.

The caveat with learning and perfecting the basics is not to let it stifle imagination.

Letting Things Come to You

After all the training and practice, all the hours and years, you become efficient and smooth at all you know. The next step is to disregard what you don’t require. You need to determine what works for you and what doesn’t.

Not every fight is a complete triumph, but you can change the circumstances in your favour. A martial artist who is better at grappling should steer a fight in that direction, instead of taking repeated kicks to the head. A writer who has greater success creating mystery novels should do that more often than writing poetry. This doesn’t mean that you should never do what you are weaker at, only be smart about when you do so.

Another issue that can impede an author’s progress is the habit of editing while they write. One of the best aspects of writing is when the story seems to ‘tell itself’ or ‘flow out of nowhere’. For athletes it’s called being in the ‘zone’.

When this happens an athlete never stops to question the situation. A martial artist won’t stop mid-fight to review whether their punch or kick was done with perfect form. What matters is the result. Form can be reviewed and corrected when the match is over.

When you reach this point in your writing, don’t interrupt the creative process. You are in a battle of words, a dance of characters and settings. If you stop to correct what you have done, while in the midst of doing it, the moment could be over and the fight lost.

While in university I continued to do martial arts, regardless of how strenuous the course load was…or perhaps because of it. For me martial arts are a release of physical and mental tension; a way to push aside thoughts of my day and better myself at the same time.

Each of us has different ways to do the same. What I discovered is that for many authors writing provides a similar release. Delving into a fictional world is something most people do at times through reading a good book. But when you are the one writing the story it provides a sense of control over your circumstances, which is impossible to do in real life.

Many authors have turned to writing due to some type of personal problem. The issue may involve yourself or other people in your life; sometimes it is a mental difficulty, other times a physical hardship. Bruce Lee formulated and wrote Tao of Jeet Kune Do while he was recovering from a back injury he sustained during training.

For Bruce and others, writing was a way to express their inner thoughts, emotions and pent up energy; to take control of their lives and to find a means to grow. Peace of mind is the first and most important step to having peace through your body and in your life.

I have heard and read comments from people discussing how poorly some world famous novels have been written. The setting may seem borrowed, the characters common or the plot obvious…but it worked. People by the millions enjoyed the story, which is all that matters.

Too many people get caught up in looking at the negative aspects of different novels, instead of trying to discover what made the story appealing. Often what people enjoy is an innovative concept the author used, the type that others would say, “I don’t know about that”. This is where trends come from, when others follow suit either by coincidence or through design.

Your story doesn’t have to be a masterpiece for the ages. Striving for something like this is a nearly impossible goal. In martial arts, it’s not important to be better than everybody every day, only better than whomever you face today. Make your actions creatively based on what you can do and what your opponent cannot.

Finally, martial arts and writing share the theme of misdirection. You must make tremendous efforts look easy, blend basic technique with creativity and often make people think you are doing one thing, when in actuality you are setting them up for something different. A surprise is one of the greatest tools an author has at their disposal

If you are struggling with your writing or trying to become published, do not surrender. Persistence and innovation are the keys to achieving success in anything worth doing. Keep your focus on your goal and make a little progress each day. There is an inner samurai inside us all, waiting to come out.

K.S. Crooks is a Fantasy writer who published his first novel, Guilds of Galyndor: Quest for the Sagacitas Elixir, in 2014 and is currently writing the sequel. He is also active in sharing ideas with others through his blog at kscrooks.com. You can also follow him on Facebook and Twitter.

There are so many home-hitting points that I will have to narrow down the ones that I call out:

1. When it’s flowing, let it flow rather than editing in the middle. Such an important thing to know. Sometimes a whole novel will come to you while you’re driving on a long trip. Not getting it dictated or on paper right away means that some of the energy will drain out of your creation.

2. Use your strengths. This is where knowing yourself really comes into play. I was recently able to turn down some work that was really out of my comfort zone, and I actually felt really great about it. There are people who “get” my writing, and others who hate it – I finally stopped trying to do it all and just focus on what I’m good at. That was freeing.

3. Writing gives you the chance to control circumstances in an environment you create. That is why we are drawn to it, I believe. You get to play with worlds and characters and see what they do, standing out of the way sometimes and letting the world you created play with itself. If that isn’t playing God, I don’t know what is.

Thank you so much – there was so much more packed into this article.

One of the great articles. You really showed the connection between the MARTIAL ARTS and the WRITING PROCESS! You’re right, writing is like a martial art in that you need training, patience, determination and experience to make it perfect. Thank you for sharing your ideas! 🙂