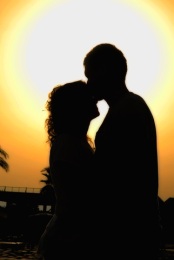 As fantasy writers, we accept that certain elements are expected in our novels.  For example, the fight scene. Whether it’s an epic battle or a street duel, there’s going to be a fight somewhere. But what about love?

I recently talked with a few friends about writing romantic scenes. The general feeling that these writers shared was one of hesitancy. Hesitant to write a love scene? How could that be? Don’t we all love more than we brawl?

After a few in-depth conversations, I determined that their hesitancy was really apprehension over the execution of an intimate scene. So I tried to boost my friends’ confidence, and I think what I came up with might be useful to other people struggling with a similar conundrum.

The differences between writing a fight scene and writing a love scene are minimal. For instance, a good fight scene will engage readers, bring them into the action, and use strategic sentences, giving the illusion of time passing between actions. The exact same approach works for a good love scene.

A weak fight scene reads like a play-by-play narrated by a semi-skilled ring announcer, calling every shot and occasionally giving technical insight.

“He swung wildly, clipping the orc on the side of the helmet. Steel clashed with steel, ringing loudly. The orc swung back, hefting an axe five feet from head to haft…”

You get the point. A good fight scene will incorporate personality and voice, and focus more on the character than the actual blows.

“He regretted giving the orc a chance to walk away. Perhaps age had softened him. Loathing being called an old man, even by himself, he summoned vigor he knew still lived within him, and assumed a low ward. Buckler touching hilt, he stepped closer to the pig-faced bastard bent on…”

Okay, so what makes a love scene weak and strong? Same things. Is it a choreographed pet-fest, or a tender moment incorporating complex emotions? Is it a technical blueprint of actions, or a lust-fueled, awkward first encounter? Of course, the tone of the scene will influence the execution, but let’s start with the basics of what makes a good scene, regardless of whether it’s two paragraphs or two pages.

With fight scenes, as well as love scenes, physical cues are good, but inner thoughts give the illusion of time passing.

“He swung his sword. He swung again, cleaving the orc’s left hand off. The orc fell to the ground and he swung one final time, ending his opponent’s life…”

You can say he swung once and allow inner thoughts to do more work for you, giving the illusion he’s still fighting, while thinking.

Same thing for a love scene. As soon as your character’s lips meet, internal thoughts or descriptions can give the illusion that the kiss isn’t a mere peck, but an ongoing swapping of saliva.  In this way you avoid repeating the action again and again, which will fast become dull.

“He leaned into her, using his tongue to part her lips. Still quivering in anticipation, he wound his fingers in the silk scarf wrapped around her shoulders. It didn’t matter that it was dark.  Everything that he needed to know, he could feel. Her breath, warm on his face as she panted through her nose, and her weight leaning into his chest…”

See? They’re kissing that whole time, but I didn’t need to describe it more than once. I could focus on other things. Which leads me to my next point…

Just as a fight scene builds tension over time, so will a love scene. If your love scenes are comprised of rapid-fire actions (even really good ones), that take three minutes to read from first kiss to the end, the reader will be disappointed. Of course, each scene will demand a particular execution, but if the sentences read too quickly, without inner thoughts, sensory descriptors, and actions and reactions, it will not feel natural, and it won’t feel satisfying to the reader.

In a street duel there’s sword action, which would be missed if absent. But the other thing that makes a fight scene good is the voice of the character. The same goes for a love scene.

In internal thoughts, you can take the scene wherever you need it to go. Is the person a reluctant lover? A blushing bride? A paid courtesan?

Sharing your character’s thoughts allows you to build a love scene without focusing on the bodily actions taking place. So if you are embarrassed by certain concepts or words, you don’t have to include them. You can allow the reader to fill in the blanks. There are lots of ways to hint that something is happening, and only show the reactions, thereby keeping a more PG feel.

I struggle with language on a regular basis. While I write a fair amount of intimate scenes into my stories, I avoid wording that I believe better suited to a different sort of book. I’ve read romance novels that actually made me blush, and I’m a pretty adventurous girl. It was just the words used that made me throw up in my mouth a little.

I decided long ago that those sorts of phrases have no place in my novels, because above all, I write fantasy stories with romantic sub-plots. But, I don’t want to become scientific or crude, either.

And this is the biggest difference between a love scene and a fight scene. In a fight scene, you rarely have to make a more difficult decision than choosing whether to call it a sword or a cutlass. In an intimate scene, word choice is critical. My best advice is to write the whole scene up, and then give it a good read through, noting any words you feel awkward reading or that seem not to fit. Sometimes I make concessions, say, if I simply must show a particular action, but abhor having to write it out. I have to choose… write it or cut it. Having a goal for the scene will help make that decision easier. That leads into my next point…

How Much to Show

This is one of the biggest dilemmas I’ve seen on the forums. “How much ‘action’ should I show in my love scene?”

My best answer? As much as the story demands.

The way to judge it is in the set-up. I’ve written stories where the romance, over the course of the novel, never goes beyond some hand-holding and a few stolen kisses. I’ve also written full-blown passion-fests, from which I had to take a break and smoke a cigarette after writing them. Yep… that good.

If you’ve spent much of a novel setting up a romance, you should assume that the reader is invested and expects a satisfying payoff. If I read twenty chapters and got to the moment where they’re about to confess feelings, only to have it fade to black, I’d feel ripped off.

I’m not advocating going overboard with graphic imagery if you’re not comfortable writing it, but I think the payoff for the reader should be a determining factor in deciding how much to show and how to show it.

It’s completely possible to write an effective love scene without getting too graphic. Once I wrote an intimate scene spanning 261 words, and summed up the “action” with:

“When the sheets were wet and Rita smiled in delight…”

So five paragraphs, and I got my point across.

I think it’s completely possible to maintain a minimalist style and still write a great love scene, but again, pacing and time are factors that need to be considered. The more time you spend, the more you should probably “show”. A three page build-up of tender words and anticipation, ending with a fade to black is probably going to irk a reader. Especially if they’re well-loved characters by the time they fall into bed together.

While I’m a sucker for love stories, I fully understand why so many people struggle with writing intimate scenes. It takes practice, just like writing fight scenes does, and for some of us, it’s just too embarrassing to ask for help. It’s much easier to send your friends a fight scene and ask for critiques.

If you feel that your romantic sub-plot deserves an intimate scene, I hope that the strategy of approaching it as if it were a fight scene is helpful. I think striking a balance is the best advice, and letting your story drive the pacing and sentimentality of the scene is the best way to determine how far to go and how best to execute it.

I tend to rely on realism when I write love scenes, incorporating awkwardness, humor, regret, shyness, etc. Let your characters tell you what they would do, and just stand back and let them do it. Pun absolutely intended…

Do you delight in writing love scenes, or do you have some hesitancy?  If you are hesitant, what is holding you back?

This is really useful. Really struggling with my love story, which is vital to my overall plot. Hopefully thinking about it like this will help.

newtonrochaActually… I don’t.  🙂  I have some characters who fall into bed on their first meeting and build a relationship involving feelings later, and some stories build innocent relationships over the course of the novel, ending with a single admission of feelings.  I try to keep it fresh and most of all realistic.

Antonio del Drago Morgyn   Thank you SO much.  Immediately went and read it.  I am so looking forward to Anita publishing a novel.

Morgyn Anita had a short story published in the February issue of Myths Inscribed.  I highly recommend checking it out:
http://ezine.mythicscribes.com/?p=569

Great post, just what I needed. I also find it hard to write love scenes, I must bury myself deep into the characters minds in order to make them work. I fear “faking” it, not making them plausible enough for the reader. A. Howitt, how do you avoid the dreaded “instalove” in your novels?

Anita, immediately went to Amazon.  Couldn’t find your writing.  Is it there?
Would love to hear you discuss the hairy, fuzzy line between YA & Adult fantasy.  Your head, tres straight upon thy shoulders!

@Tony Dragani
😉  but now you know how…

I rarely write love scenes. I will have the lead up to one, or just after the conclusion, but I generally leave what happens in between up to my readers

I agree. Loves scenes are really not my thing and I too leave it up to the readers imagination.

Truth be told, I am hesitant to write love scenes. This is probably because I don’t read many books that have them.