Travels through Farynshire: The County Road 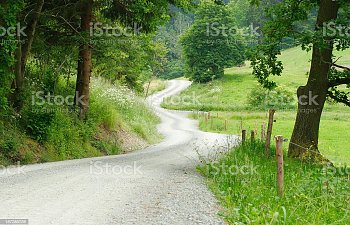 The Romans came to Farynshire, built one road, and then left.

The County Road – or Farynshire Way, or the Highway, or the Route – link up the three cities of Farynshire: Rookpot in the centre of the county, and Sylnmouth and Riversouth on the coast. Newer towns have been built alongside it over the years, and the Rookpot to Sylnmouth railway line runs alongside it.

Because it is the only evidence that the Romans crossed the Daggerrock Mountains, the Road is under constant study and scrutiny by archaeologists and historians. It is an annual field trip for all first year undergraduates studying Archaeology or History at Rookpot University to take part in the dig along the Road. I think it was this trip that made me commit to the study of manuscripts and historical documentation for the rest of my time at university (I signed up to the second year module, Musril in Context, as soon as I got back). Nevertheless, I have fond memories of my obligatory summer trip.

I’m not sure what the Hangman’d Turnpike is – it consists of a tiny train stop (an earth-banked platform and no actual station), a youth hostel for the Archaeology students, a pub for their lecturers and the veteran archaeologists, a post office, and a car park. Is that enough to make it a village? A hamlet?

The dig itself is two miles away (inching ever closer to the pretty village of Newmey). I recall very clearly getting up at six thirty every morning in order to trudge along the pleasant, quiet country lanes that are bordered by fields of green crops. We would then spend all day crouched in a ditch carefully brushing layers of dirt off mud, just like hundreds of first years before us.

Back then I stayed in the hostel, but one year later I awoke at a respectable hour in one of the small, comfortable back rooms on the top floor of the pub. We had called ahead, but we were the only guests anyway.

The trek from the Turnpike to the dig was much more pleasant than I remembered. I suspect this is because it was late morning, and it was less of a trek and more of a pleasant stroll. Also, I was not going to spend eight hours digging under the hot summer sun.

The dig is the oldest in Farynshire. It was Meredith Roke himself (pioneering Digger from the early twentieth century) who claimed the site for Rookpot Museum and the University, back in 1923. There is little sign of this longevity at the site itself, which is usually restricted to a maximum of four ditches at any one time. A section of the original Road itself has been left exposed so that successive classes of students can be compelled to study it. If any artefacts are discovered they are taken back to Rookpot University for the professionals to study.

The lead archaeologist that we met was Professor Roland Coombes, a Digger from Rookpot Museum. He was a large exuberant character with a wild mop of white-streaked grey hair, and a red and green checked flannelled shirt flapping over khaki shorts, dirty tools sticking out of the pockets. His mouth hid behind a rough approximation of a handle-bar moustache.

“A reader of Musril, eh?” he said, almost pulling my arm off when he shook my hand. “A disappearing skill. Not much use for it over the mountains, I guess. Not that many folk from Farynshire choose to learn it either. Not even all Diggers.”

I doubt I would even have heard of Musril had I not chosen to study History at Rookpot University. My choices of degree had been limited anyway due to what my Dad called stage fright during my A’levels which had resulted in disappointing grades. Rookpot University is many things: beautiful, mysterious, the only university in Farynshire, but held in good regard within the wider academic community it is not. Which means it is quite flexible as to the quality of students they let in. The horror of exams was one of the reasons I was so keen to have this trip to look forward to after our second year: I needed something beyond the exams to focus on to try and control the panic.

Professor Coombes was right: it was unusual for anyone outside of Farynshire to study the county’s history, Peoples and language. Technically that wasn’t what I was studying. I would leave Rookpot (exam results permitting) with a degree in History Studies. It was only when you looked closer that you would see that my modules were overwhelmingly Farynshire biased. I was glad I was learning about Farynshire and its Peoples, and the only place to do that is Rookpot University. So it all worked out well for me.

All this, I have noticed, has earned me cautious respect from my lecturers and other academics at the University. I’m not exactly regarded as a native, but my interest in Farynshire and her Peoples has elevated me above the status of “someone from over the mountains”, which is a rare accolade.

Professor Coombes was keen to tell us about his work and the history of the area we were strolling through. He was a natural lecturer.

“It seems, on the surface of things, that there’s not much going on, Roman-wise, in Farynshire. They haven’t left much behind for us to go on.”

“Just the one road.”

“So the textbooks would have you believe, yes.”

I had learned throughout my studies that, unless they had written them, most academics thought the textbooks on their area of expertise are wrong. I waited for Professor Coombes’ correct version of history.

“It is true that they only built one road, but that wasn’t all they left here. There are quite a few settlements along the Road, and nearer the coast too. The interesting thing I think is that they were here for such a short, such a finite, period of time. From what we have discovered so far, it looks like they only stayed until the early 420s.”

“And then what happened?” asked Felix.

Professor Coombes’ moustache stretches across his face when he smiles. “Exactly!” He punched Felix in the shoulder, nearly knocking him over.

Investigating why the Romans suddenly packed up and fled back over the mountains will keep the Diggers and academics in Rookpot employed for many years to come. I am not the only one to suspect it probably had something to do with the other Peoples. I have spent many an Industrialism and Politics lecture (a subject devised a particularly fiendish sadist – death by dullness) daydreaming about battles between Roman centurions and wolvern warriors. There is no archaeological evidence for any skirmishes – well, none that have been discovered yet – but that has not hindered the hopeful speculation, written up in many books, on many conspiracy websites, and even featuring in a few prestigious journals. Any new artefact or theory is immediately subjected to intense academic scrutiny, because everyone hopes it is the missing link that will prove one of the theories correct. I’m holding out for a buried battlefield somewhere near Wild Wolvern Mey.

We managed to extract ourselves from Professor Coombes’ enthusiastic lectures after a couple of hours. We walked along the County Road to Newmey, a beautiful little village surrounded by apple and pear orchards. The pub, The Travellers’ Rest, has a wide and impressive range of perry and cider from the many local breweries. We had one of each as we shared a giant Root Pie (carrots, turnips, parsnips, onions, celeriac, flavoured with garlic and ginger, topped with mash potato, all encased within a thick, buttery crust).

We were very close to Riversouth – too close to not visit. But there was one monument I wanted to visit along the way, and it is within walking distance of Newmey.

Many people think, due to its Celtic connections, Farynshire must have numerous ancient Standing Stones. In fact, it only has one ring of them: Giddweon, just off the County Road, and they were put up in 1962 by the Meyrick of the time, because he thought Farynshire should have standing stones. It’s worth a visit. He brought stones from each range of Peaks in the mountains, there is one stone made of Rookpot’s gorgerock, a couple of white stones from the seas around Riversouth (the same stones from which The White Palace is constructed), and pillars of standstone and limestone to represent the diverse landscapes that make up Farynshire.

It is in the middle of a large field of wildflowers and while I would not describe it as magical exactly, it is surprisingly peaceful. When we arrived the only other living things were some rabbits chasing each other between the stones, and a group of jackdaws hopping amongst the rough, overgrown grass.