Travels through Farynshire: the Silver Loop 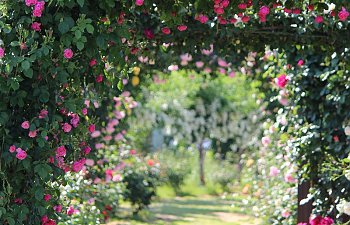 I always feel like I have to be on my best behaviour in Riversouth. The streets are scrubbed clean and free of rubbish, and baskets of bright flowers hang from every lamp-post. Each house is white-washed and has a different colour roof from its neighbours. If we could have afforded it, we would have taken one of the popular balloon rides over the city and look down on the colour and crowds. The city's pride in being welcoming probably originated in the Victorian era when the new railway brought the rest of Farynshire to the seaside for their summer holidays.

I should probably explain a bit about the Meyrick for those of you who don’t live in Farynshire, because there is no Riversouth without the Meyrick.

Riversouth is not a separate city state or anything, but the Meyrick exerts an authority unlike anyone else in Farynshire (even Rookpot Council has to share powers amongst the elected Councillors). I suppose the Meyrick’s position could be likened to the mayors in some English cities and regions, except that the Meyrick is an unelected, hereditary, lifelong role, so it’s also reminiscent of royalty – especially with the palace. The White Palace sits high above the city on the White Crag at the southern end of Meyshore Bay, looking out over the ocean. Meyricks have epitaphs like royalty too, in order to make biographers’ live easier. They started out with numbers, but got bored around the time of Meyrick CXXIII. His daughter was known as the Unnumbered, and thereafter an official Nick-Namer was appointed to devise a more imaginative designation system, with decidedly mixed results.

Both Felix and I had been to Riversouth many times before, but as this was our Grand Tour we had given ourselves licence to act like tourists, so we decided to follow the advice in Meyricks, Musril and Mermaids and ride the Silver Loop. This is the tram route through and around the city, and it’s the best way to get a flavour of Riversouth in one day. There are four silver trams that follow each other on a continuous circuit. You can get on anywhere, but the circuit’s official starting point is the Meygrace Gate at the entrance to the city, and your day ticket allows to you to hop on and off as many times as you like. Each tram is named for a past Meyrick, and has a plaque on the side with its name and a unique design; the Sea-Rider, the Goodly and the Sabre were already en route, so we jumped on the Curly.

The plaque on the tram depicted a face with a broad grin and red cheeks, framed with black, bushy curls, so I assume that Meyrick the Curly’s only notable achievement was his magnificent hair.

The Meygrace Gate is a formidable wrought-iron structure that looms over the pedestrianised area. Once through the gate, the tram moves downhill through the Sussenparaw Park, the largest park in a city with many. In early summer the extensive gardens are filled with roses. From the moving tram we could see bright reds, delicate violets, rich yellows, bright and soft pinks, and blazing oranges. The rich, sweet scent from the sculpted trees wafted in through the open windows, making everyone smile.

We left the park via the Old Market Bridge – a wide arched bridge that does not look like it was made for trams, but we rattled across with ease. Riversouth has quite a few bridges, spanning the two rivers that run through it on their way to the sea. The River Spurtle is the source of the the city’s fresh water that you can collect from every fountain and water pipe; we had re-filled our water bottles at the pipe by the Meygrace Gate. Rookpot’s own river, the Darkflint, also ends up here in Riversouth, though it is much slower down here by the coast than it is in the capital’s gorge (where those who enjoy such things go white water rafting, and often get out alive).

We emerged on to the Promenade via one of the streets between the Victorian terraces. This is where the guest houses are situated. We dumped our bags in the blue-washed Waves View and went to explore.

The tree-lined Promenade follows the long curve of Meyshore Bay, starting at the foot of the White Crag, and finishing up by the rocky point that stuck out into the sea at the lonely end of the Bay. In-between the terraces and the beach there are well-tended gardens and a creaky Victorian fairground. The shops and boutiques are full of every kind of souvenir, from tacky niknaks to unique local artworks. We bought sticks of rock outside the fairground before jumping back on the next tram, the Goodly, to the pier.

Riversouth is a very different place in the summer months compared to other times of the year. This is the time when tourists descend upon the city, packing the streets, the beaches and the pier. The fairground and the amusement rides are full of families, and the screams from the rollercoasters mingle with the cries from the resident gulls that have grown to monstrous sizes thanks to their addiction to chips, ice-cream and candyfloss. If you want to see another side to the city, visit in autumn when the tourist attractions are closed and you can often be the only person on the Promenade and visit the lonely, windswept beaches outside of the city.

But you do have to come during the summer months if you want to step on the pier, as it is only open between May and September. According to Meyricks, Musril and Mermaids Riversouth has two piers, but this is really only technically true.

The Long Pier is one and a half miles long and extends out into the sea at the end of the Promenade farthest from the White Palace. It has two Victorian pavilions that host numerous shows, cabarets, and other entertainment morning, noon and night during the summer season. The performances often spill out on to the pier with no prior warning, and audience participation is compulsory – you have been warned. We got off the tram here, but just admired it from afar.

The Siren Pier sits under the White Crag, and is nothing more than a few rotten timbers that are barely visible above the water when the tide is in, and look like the skeleton of a long-dead creature from the depths when it is out. There are persistent rumours that it is the remains of a seafolken, but researchers from Rookpot Museum have carried out extensive tests, and it is definitely made from wood (so maybe it’s the remains of a foresteen?). There are many stories connecting the pier to seafolk: maybe it was a place where bygone Meyricks watched or even spoke with seafolk when they frequented Meyshore Bay, maybe mermaids sat on it to comb their long, blonde hair and sing seductively to sailors. If they had ever indulged in such well-worn clichés, they don’t any more, as no seafolken has been seen in the Bay within living memory.

It was a day for ice-cream. Swimmers, paddlers and inflated toys bobbed close to shore, and further out there were dinghies and small boats on the calm Bay waters. Beyond the White Crag, in the rougher waters outside of the protected Bay, we caught an occasional glimpse of a larger ship on its way to Sylnmouth further down the coast. My favourite Meyrick has a statue overlooking the water. There are numerous statues of past Meyricks striking various dramatic poses on top of plinths or in the middle of gardens throughout the city. Meyrick the Old became Meyrick at the age of seventy-five, and during her three years on the job, the most important thing she did was to introduce a decree which stated that all dolphins, seals, sharks and whales have right of way in Meyshore Bay. The decree lasts to this day, and it is not uncommon to see a queue of luxury yachts waiting outside the marinas under the White Crag as a seal passes by. Meyrick the Old's statue sits just above the beach, a permanent smile on her bronze face.

There is something about sea air that makes me hungry, so once we had finished the ice cream, we bought fish and chips from a small stall called Poss and Bucket (poss being Musril for fish; bucket being … a bucket) and made our way to the foot of the White Crag. There is a bus service to the top, but Felix decided that we should walk up the Zag – the road that winds its way up the vertical cliff, to really appreciate … something – presumably how unfit we are. At least the chips would keep me going.
Share:
Facebook Twitter Reddit Pinterest Tumblr WhatsApp Email Share Link