Travels through Farynshire: the Wild Gift 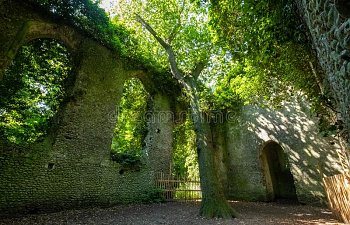 
The most famous and powerful of the Peer Families are the Meyricks of Riversouth. The most eccentric (amongst some stiff competition) are the Bescoby-Angells of Sussengaard.

The Bescoby-Angells are known as the Gardening Peers. Their main seat is Sussengaard, a sumptuous country house surrounded by glorious rose gardens, stuffed herb gardens, plum, apple and pear orchards, and acres of wildflower meadows. If you have time, it is well worth taking a tour of the gardens – a lovely, civilised way to spend the day, maybe taking some afternoon tea in the beautiful Lawn Room as well. But if you are feeling a little more adventurous, you should do what we did and visit the Wild Gift.

The Wild Gift is the Bescoby-Angells’ true legacy. It stands as a testament to their commitment to and love for nature. It was once called Bex Frith, and it was the largest town in Sussengaard. In the 1840s, at the peak of Industrialism, the Bescoby-Angells deliberately abandoned Bex Frith, leaving it for nature to reclaim. The inhabitants were relocated to new housing in the surrounding villages, and wardens were employed to patrol the ghost town and prevent anyone from moving back in. Bex Frith became known as the Wild Gift.

These days there is a still a Warden, and it is their job to ensure that the Wild Gift remains for nature. One of them wrote the code you must abide by if you visit:

This is not a place for humans, and your presence is not welcome here. If you do persist in visiting, be mindful of the laws of this land:

You are responsible for your own safety

Do not ride, drive or bring anything with wheels here

Do not linger, do not loiter

Take nothing you did not bring in with you

Leave only footprints (if you must)

Do not damage or mark anything

Do not get lost – nobody will come and find you

All life here must be respected

Anyone who contravenes any of these polite and reasonable laws will face fierce, full and prolonged retribution.​

These laws are taken very seriously. You would not be the first to wonder how fierce, full and prolonged the retribution can be, and fortunately early transgressors provide cautionary tales. A family barbeque in the 1970s resulted in three months community service for the family involved. The community service took place in Sussengaard, and the family were from Birmingham, so that ended up being quite an extended stay for them. A couple of people were caught shooting rabbits in the late 1990s, and I think they are still in prison somewhere.

All of this means that you tend to approach the Wild Gift apprehensively and very very quietly.

If you’re as unfit as I am, you will also be quite out of breath because it’s quite a hike through the fields and country lanes to the misshapen moss-covered lumps that mark the edge of the old town. There was once a bridge that ran over the canal that transported trade to and from the River Spurtle. Now the canal is a dry ditch filled with sharp-edged grass and brambles, and the bridge is a rockery covered in lichen that you have to clamber over.

Once you have pulled yourself out of the ditch you can see the town. A gentle sward leads up to a mound of thick ivy, which might still have a wall in it somewhere. Beyond this are trees and ruins. It feels a bit like entering a place of worship you have never been to before; you’re very aware that there are rules you need to obey, you try and step softly and be quiet and unobtrusive as possible, and a quiet awe suffuses everything. But it also feels like you should not be here at all. This is nature’s place now.

If you look closely you can find the unnatural, straight lines that are the only signs of where the streets used to be. Some of them are just a wild mass of untamed vegetation, lined by ruins, but the more popular tracks are grass paths that lead through the bushes. At first you think the town is silent, but then you realise that there is noise, it is just not human noise. Birdsong is continuous, and soon you forget it is there. The rustlings from the bushes, skitterings on the rubble behind you, and scuttlings in the dark, empty doorways are more disconcerting. It soon becomes clear that you are not alone.

The terraced houses that faced each other across narrow cobbled streets now have saplings rooted in the living rooms and rising through the first floor, reaching above where the roof once was. Some of the buildings are wrapped in branches and wines that wind out of glassless windows and hang from splintered beams. The vines had pulled down a few walls, and now covered the fallen masonry. Flowers grow along the road, or from the cracks in the walls. We walked between the houses and found that the alley is full of roots that have fallen from an oak growing on top of what is left of the wall. We were careful not to damage any of the roots as we carefully picked our way through the tangle.

On the other side of the alley is a wide square meadow, fill of long grass, poppies, forget-me-nots, and other colourful flowers. Two dappled deer looked up from their grazing, cheeks moving, and regarded us with frank curiosity. When Felix slowly and carefully reached for his camera they trotted off. He did take some pictures of the many rabbits running and jumping over the rubble. A couple of squirrels watched us from the branches of wild pear trees. A shadow passed overhead and we looked up and saw red kites wheeling above us. The wildlife in the Gift knows that this place belongs to them, and it is unafraid of any human visitors.

The most recognisable building is the red-bricked factory and the Old Mill beside it. This is where the canal ran from, but there is no running water here now. The factory tower is still standing, but only because there is an oak tree growing in the centre of it, and its branches now hold the structure together in a weird fusion of brick and living wood. I’m still not convinced that this is not a foresteen. It seems almost alive as its branches entwine with the tower, and it feels like it is watching over the whole Gift. Unlike Gnivil Forest, though, there have never been any rumours of foresteens in the Wild Gift.

The main door to the factory once stood over twelve feet high, and it is much higher and wider than that now, as the frame has been pulled down by an expanding thicket of gorse that has spread inside. I was very aware that there is no phone or wifi signal in the Wild Gift as we entered the factory. Nobody maintained these buildings, and if we had an accident, there would be no rescue.

The roof of the factory had long since fallen in, and basking in the sunlight that poured in was a carpet of nettles. We carefully picked our way through the waist-high nettles, getting stung quite a few times. Towards the centre of the vast space the floor falls away completely. Vines hang over the edge and tremble in the cool space below. Here there is no birdsong, just a constant, echoing dripping.

Several floors must have fallen in because at first we could not see what was at the bottom. A cloud passed overhead and the sunlight shone straight into the void. Far below we saw a brief glint of light. Felix suggested we try and go a bit further down. This is not as impossible as it first looked because the collapsed floor had resulted in a rough slope of rubble that we could slip and slide down. Soon we reached a point where we would have needed ropes to go any further. But we had a good view of what was below.

The waterworks in the Old Mill next door had slowly been destroyed, and the water had ended up trickling out and forming the lake below. It flooded the cellars of the factory, and now laps at the stone steps that disappear beneath the gloomy surface. As we watched bats swooped and dived over the surface, and a shadow slunk back into the darkness before we could see what it was. I know that some people go diving in the lake, but the dark green surface looked sinister and thoroughly unappealing to me: who knows what lurks in the fathomless gloom? As soon as Felix had taken his photos we climbed back up to the factory floor.