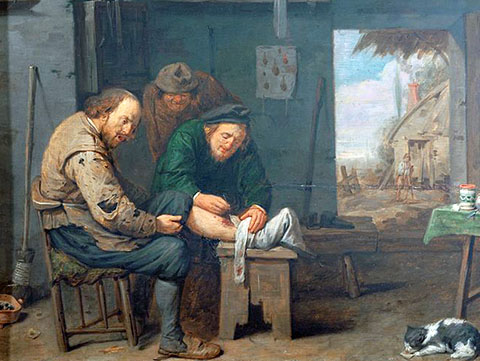 One of the more interesting trades in the Middle Ages was that of a barber, sometimes also called a barber-surgeon. You can tell just from the title that we’re dealing with more than just trimming hair.

Barbers did cut hair, of course. The word itself comes from the Latin word for beard (barba), and barbers had not only to know how to cut but also how to cut in the current style. Merely cutting hair (facial or head) was regarded as simple work, appropriate for a journeyman. Surgery belonged to the masters. 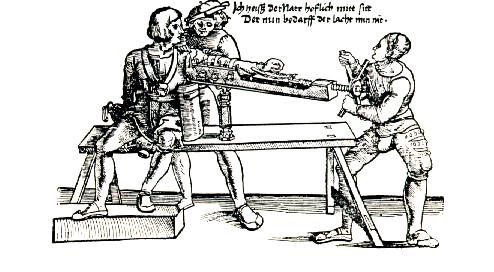 Because of his experience in these areas, the master barber could expect to find himself drafted as a field surgeon in the town’s militia. There he extracted arrows, sewed up wounds, and so on. If necessary, he could also perform amputations.

The position of barber was tainted socially because he worked with blood. Anyone who worked with or around blood (butchers, for example, or executioners) could not be regarded as fully honorable. I shall write about what “honorable” meant in a medieval context in a separate post.

No master was allowed to own more than one shop. This was a common regulation across all trades. Most modern economists look at this and complain of the “restrictiveness” of guild regulations and (naturally) the superiority of free trade. But that looks at the matter backward. A guild was a brotherhood. All the brothers were equal and all had responsibility for one another’s care. In a family, should one brother dispossess another simply because the one ran into debt? Does a man try to ruin the business of his brother to his own gain? Well, of course they do, but that was not the ideal, nor the common practice.

Since barbers were in no small part engaged in the health care business, the city had an interest in how they dispensed that care. Master barbers were required to give first aid to all who sought it, regardless of ability to pay. No one was allowed to object (this was aimed mainly at protecting them against complaints from doctors about stealing patients). Where the first aid was sufficient, a “seemly” payment could be charged, “which shall be approximately the cost of the cloth” (that is, the bandages) or according to a negotiated agreement. If more care was needed beyond the immediate bandaging of a wound, then the patient could be sent on to a medical doctor.

The line between the barber-surgeon and the doctor was a blurry and contentious one. Disputes were frequent. Barbers were forbidden to administer purgatives or other medicines. They could and did, however, perform bleeding, a common physic throughout the Middle Ages.

Another blurry line concerns women. By the end of the Middle Ages, men more or less controlled both the medical trade and the hair-cutting trade, at least in the cities, but in earlier centuries—which is to say, for most of the Middle Ages—that was not the case. Women could and did cut hair, though it’s not clear whether they cut anyone’s hair or if there was a gender divide. There was none in law, but custom can be even more powerful than law. Women could perform bleeding and do small ministrations, but there’s no evidence of them performing surgery, at least not as a regular part of their trade. As mentioned, as both barbering and surgery came increasingly under the control of the guilds, women were increasingly closed out of both. How and why that happened would take an entire post. Or two!

Augsburg master barbers took an oath, which said this, in full:

Each year all Barbers shall swear and promise they will faithfully attend to the sick, poor and rich alike, according to their need. And they will not hold the poverty of the poor against them nor in any way slight their care of them. No Barber shall bleed anyone who is very sick or who has evil signs without the permission of a sworn Doctor, except during a plague or an unknown sickness. Likewise, when they have a sick person in their care, they shall not administer to them on an extended basis without the permission of the Mayor. They promise therefore to bandage all people. And if the wound is very serious, they shall send a servant or some other person to the Mayor with that information and they shall ask the person how they were injured.

That last sentence in effect turned the barbers into a kind of coroner, and indeed barbers were called in to examine bodies in cases where there was doubt as to cause of death. This occurred most frequently in cases where people died on the streets, these often being the homeless poor, or strangers.

The guild had two sworn masters who were charged with setting fees and for ensuring that only competent masters hung out their signs. They held inspections of shops. Beyond these two were two overseers who served a four year term. A new one was appointed every two years so that one was always senior to the other. The overseers could summon anyone within the guild and judge him. Insulting an Overseer would result in being placed in irons. An overseer could be anyone, guildsman or not, and was appointed by the City Council. Another duty was to read the entire set of regulations (over fifty in all) to the entire guild once a year.

The reader may note that the tone of all this concerns the cities. What happened in the countryside? Home remedy, to put it simply. Peasants cut one another’s hair and beard, and tended to each other’s injuries. If the sight of a surgeon’s tools makes you queasy, try not to imagine what the peasant might use to set a bone or to repair a wound.

These details from the Barbers Guild of Augsburg provide all sorts of ideas, at least to me. If I have a murder mystery in a town, I’d certainly involve a barber in the role of coroner. I think I could find room for at least a scene for a barber-surgeon on the battlefield as well. Beyond that, a barber’s shop is a handy source for a murder weapon.

Of particular interest for the fantasy writer, is the presence of other races. Would there be a barber specifically for dwarves? Might he (or she) have a special position in dwarf society? Maybe among humans barbers are considered a dishonorable profession, but among dwarves they might be elevated.

How about for elves? Do your elves even grow a beard? But that hair still needs a trim, and elvish hair might present particular challenges. How about an orcish or half-orc barber? Beyond trimming hair, what about a barber’s surgical role? Would you call on a dwarf barber to investigate a dwarf body? Would you let an elf operate on a human?

Beyond this again, I would think that the barber’s shop in most any society would be a center for distributing gossip. As evidence I cite King Midas and his barber.

So if you want a place for a secret to be kept, or to be leaked, the barber shop is a fine place to do it. Or, if the character is important enough, have the barber come to the palace.

Does any of this spark ideas in you? If so, and you’re willing, please share with the rest of us! We would love to hear from you!

It certainly used to comprise of more than cutting hair. Today that is why surgeons have the title ‘Mr’ or ‘Mrs ‘and not ‘Doctor’. They are, of course, doctors but this harks back to the days of Barber-Surgeons.

Another great article – barber-surgeons come up regularly in historical fiction, but seem to be rare in fantasy and I suspect only appear when things are bloody as opposed to normal.

Another great article SK. Keep up the amazing work.

That's interesting, Black Dragon. Very generally, trades that had to do with blood were not in the upper echelon, but my knowledge of that comes more from Germany. Also, by the 19thc, barbering and surgery had been pretty definitively separated.

With barbers, they at least did not deal with the poorest of society, who for the most part cut their own hair, so that may have played into the position of esteem held by barbers in Italy. And maybe elsewhere. My knowledge of this stuff tends to trickle away to nothing around 1700.

My father told me that when he was a little boy his grandfather (an immigrant from Italy) dreamed of my dad becoming a barber. In my great grandfather's native city barbers were esteemed, and (from what my father was told) did more than just cutting hair. Apparently being a barber was still a high-status position in early 20th century Italy.