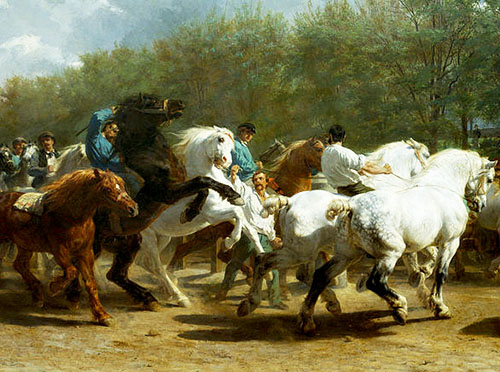 In the south of France, around the mouths of the Rhône River, lies a region known as the Camargue. It is a land of marshes and reeds and waterfowl. Vast quantities of salt are produced in its wide salt pans, salt with a distinctive pink hue.

And there are cowboys.

The cattle are black, with curved white horns. They graze more or less wild across the marshes, though they are marked with the brands of their owners.

The ranchers are called gardiens. They ride small, white horses of an Arabian type that are one of the oldest horse breeds in Europe. They carry long spear-like sticks with a small, metal trident on the end. The gardiens have ridden these horses and herded these bulls for centuries, though their way of life steadily declined after the French Revolution and the Industrial Revolution. 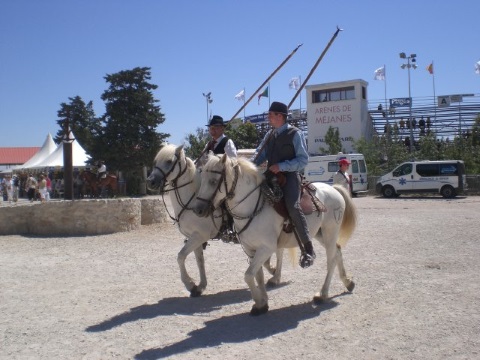 In 1889, Buffalo Bill brought his Wild West Show to Paris as part of a larger exhibition. Exhibitions were all the rage in the later 19th century, and Buffalo Bill’s show proved so popular it nearly overshadowed everything else. Which is saying something, because it was at this World’s Fair that held the Eiffel Tower. A good account of the show, including pictures, can be found at True West Magazine. Put simply, the Wild West Show was a hit. The fashion elite even took to wearing cowboy couture.

Among those impressed was Baroncelli. He struck up a correspondence with Bill Cody that lasted for some years. The Marquis at the time had a ranch near Saintes-Maries-de-la-Mer, a small town at the mouth of the Rhône, right on the sea. He was enchanted by the gardiens and was determined to foster their revival. He spent his fortune on the “gardien nation” and is almost single-handedly responsible for the preservation of modern gardien culture.

Today the numbers of gardiens do not flourish, but those who remain cling steadfastly to the old ways. They still hold their festivals, and they still have their non-lethal bull fights in the arena at the town of the Two Maries by the Sea.

The Butteri of Tuscany

I should point out that these are not the only European cowboys. They can be found in Poland, Hungary, even in Italy. There, in Tuscany, we again meet with Buffalo Bill. He had such success with that 1889 tour that he brought his Wild West Show back to Europe multiple times. In 1911, he met up with the butteri, the cowboys of the coast of Tuscany known as the Maremma. 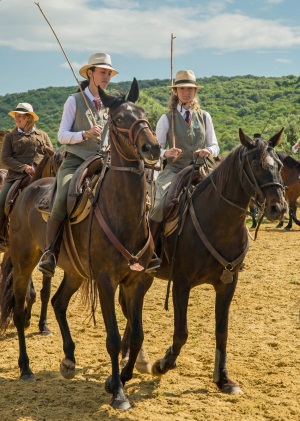 The story goes that a buttero challenged the cowboys of the Show to a rodeo. It was held in Rome and, again according to report, the butteri won the competition handily. This report comes from the Italian side, naturally.

Somewhat like the Camargue, the Maremma was almost nothing but marshland, though its history was rather different. It had been drained by the Romans and was a prosperous farming region. Once Roman authority collapsed, though, the drainage channels choked up and the Maremma became swamps once again, rife with malaria. Starting in the 18th century, new drainage was created and the Maremma slowly recovered. That’s when the cowboys began to show up. They flourished for a time, but modern livestock management has left the traditional methods far behind. The butteri seen today are almost like re-creationists. Their skill is uncontested, but they mostly perform for tourists rather than raise cattle for sale. Even so, the brown horses of Tuscany fought in World War II, and are still used by the Italian Mounted Police.

The cowboys of Hungary have an even more colorful past, for they trace their history back to the Magyars. They ride the Nonius horse and herd their gray, long-horned cattle. Where the gardiens use the trident, the czikós use a whip.

They are masters of trick riding, as you can see from the photo below. 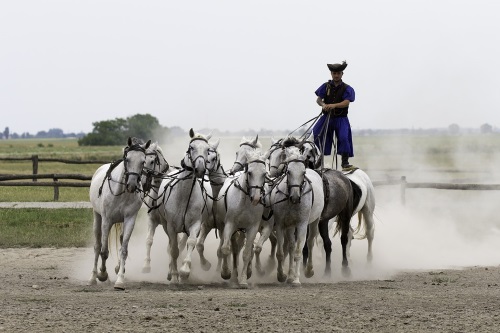 This particular trick, though, is modern. It’s derived from a painting done in 1923 showing a man riding in just this manner. The czikós declared that was just foolish fancy; nobody actually rode that way. But one individual decided he would give it a go, and a new tradition was born. Now it’s a part of just about every show on the puszta—the Hungarian plain.

I have to include the Polish cowboys. Their story is similar—a long tradition disrupted by modern methods. The Poles, like the Hungarians, have a proud tradition of horsemanship. Their cavalry was among the most highly regarded in earlier centuries. From the Middle Ages onward, vast herds of cattle were driven by these cowboys from Poland and Hungary to markets in Germany, not only for the meat but also for leather. It was an enormously important trade, with established trails not unlike those in the American West. The biggest of these cattle trails ran all the way from Kiev to the Rhine River.

Finally, I’ll mention the vaqueros of Spain. These are the most direct antecedents to the American (North and South) cowboy. They have the most familiar look and history. Their horses look more familiar, too, because Spain and Portugal directly inherited the Arabian horse from the Moors.

The Spanish have been ranchers right back to Roman times, particularly in the south, where they raise bulls for the arena. Like so much else regarding cowboys, this too is on the decline. The vaqueros of Mexico are of course their direct descendants.

As you can see, cowboys are by no means peculiar to America. This surprised me, though it shouldn’t have. Cattle form an important part of just about every society, and those who herd them perform a vital role. In every case we find that element of independence and self-sufficiency commonly associated with the American cowboy of the 19th century. Any one of these groups have aspects particular to their own background, which is ripe for picking by the fantasy writer. I used the gardiens in one of my own novels, which is how I stumbled onto this topic.

The great thing is, we can use all the attractive, romantic traits of the cowboy without having to use the word itself and thus bring in unwanted associations (unless you’re writing an Old West fantasy).  Because cowboys are out in sparsely settled country, have their own transportation, and are typically armed in one way or another, they can serve equally well as heroic loner or as dangerous bandit. Or just a determined rancher who isn’t going to take guff from some orc. And, ever since discovering these European cowboys, I’ve thought that centaurs would be perfect as cowboys.

There are few, alas. Almost nothing in the way of books (unless you can read in that language), and most of what can be found online is mostly at the level of tourist information. Searching on keywords, though, can yield a great many striking images, and going to the sources for those images can yield juicy tidbits. Look not only for the cowboy name, but also the region (e.g., Camargue, Maremma, puzta)

Here are a few I’ve found.

(the last one won’t tell you anything, but it’s an old postcard that shows these cowboys in more realistic dress than what the modern ones have donned)

(the first one is a great resource for “caballeros” generally)

Loved this post Skip! My mother-in-law and her twin sister, who are in their 70's, are both horse fanatics and ex-veterinarians. I was thrilled to send them some information and links to a few other horse cultures that they didn't know as much about. They'll be online for days doing searches now. 🙂 Horse cultures are fascinating to me and the idea of one existing in the more remote areas of a modern fantasy setting is an idea I have toyed off and on over the years. This post inspired me to look at that idea again because my love of the American cowboy as the model was not deep enough for me to want to use it as my own story model. But other than the nomadic horse cultures of the steppes / Mongolia I had little other inspiration to draw from. Of all those you mentioned, the Gardiens and Vaqueros were the only ones I had heard of before. Thanks!

I learned about the Gardiens some time ago, but I had no idea about their recent history. It’s rather inspiring to think that one good show given to the right audience could lead to the preservation of a culture and way of life.

Understood. It's no doubt where he got the idea!

I fear any reference to the Camargue will forever cause Moorcock's 'Kamarg' and folks riding giant flamingos to pop into my mind.

“I fear any reference to the Camargue will forever cause Moorcock’s ‘Kamarg’ and folks riding giant flamingos to pop into my mind.”

Thank you for this, it is very informative. Historically, what type of weapons were used by European cowboys? What would be their primary means of protection prior to the invention of the handgun?

Pretty much the same as any other group non-nobles who were not warriors–knives, cudgels of various descriptions. Maybe a sling or bow and arrow.

What about whips? Whips are pretty neat when wielded by cowboys.

Yes, whips are cool, but knives and cudgels are cooler by far.

Unless you’re Indiana Jones, in which case the whip is cooler. But Indy would make cudgels look cool.