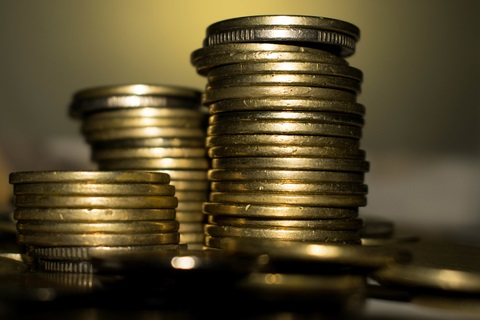 Real money was currency, specifically coins of various qualities and weights. The other kind was called “money of account.” This was purely an accounting unit, used for large-scale transactions and never turned into a physical object. When you read about a silver mark in the Middle Ages, do not picture a coin. No such coin existed before modern times.

By far the most common coin throughout the Middle Ages was the silver penny, known in Latin as the denarius. The word was preserved in the Romance languages as the denier in French, the dinero in Spanish, denari in Italian, and denar in Hungarian. The Germanic languages had their own term: pfennige in German, penningen in Dutch, and pence or penny in English. The coin was typically quite small. Now that you know the term and the coin, you understand why pence in English is abbreviated with a lower-case d, as in: £5 3s 5d. The “s” is for shillings.

In the 13th century a larger coin came into existence, known in English as a groat (groschen, gros, gros tournois). The word simply means big and the coin was colloquially known as the “big penny.” It was typically worth four pennies.

All this was silver. No gold coins were struck in the West since the fall of the Roman Empire. Gold coins were in circulation, of course, but the West simply made use of existing coins as well as new coins from Byzantium (the bezant) or Islam. Silver was sufficient, along with money of account for large transactions.

The first gold coins were struck in Florence in 1252 and were called florins. Gold coins had also been occasionally struck as commemorative pieces for big events, but this was the first that was intended as currency. By our period, there were three types of coins: gold, silver, and debased coin also called “billon”.

The English gold coin was the noble, whose value was fixed at 1/3 of a pound and which was first struck by Henry VII in the 1480s. The French gold coin was the franc. In the Rhineland it was a gulden. In Venice it was the ducat. In general, the florin was the most widely used standard. It was gradually superseded in the 15th century by the ducat (first issued in 1284).

Silver coins were steadily debased all through our period, in some cases to the point where they had only 1/96th of their 13thc silver content. Copper was mixed into the coin to such an extent that this debased coinage was known as “black money” (another term you may see is “billon”). Only the English penny stayed fine silver. Groschen generally fared better. Where there was more silver than copper, it was known as “white money”. For example, the groschen of the Rhineland were called “white pennies” (Weisspfennigen).

Money was also debased through the process of clipping. As you might guess from the images you’ve seen so far, it was possible with some coins to trim away the edges. Do this with enough coins and you have enough silver to turn a nice profit while still passing the original coins at their original value. This was strictly illegal and getting caught meant mutilation or even execution. This is also why coins came to have burrs around the edge, making clipping more obvious.

Money of account began appearing as early as the 8th century, but was in wide use only by the 12th century. The basic units were completely unrelated to coinage, but again an old Roman coin formed the historical basis. This was the solidus, which we find as soldo and sou and shilling (12 pennies = 1 shilling). The other money of account was the pound, which in Latin is libra which is why the English pound symbol is £. The libra appears in Italy as the lira and in France as the livre. Again, German had a different word, the Pfund (which also means pound). A third money of account was the mark, which was a bit more valuable, coming in at 160 English pennies (13s 4d), but the rate differed from one location to another.

As I mentioned, money of account was used only for accounting purposes. Since it had a larger value, it was easier to do the bookkeeping. If there arose a need to convert this into actual currency, one could turn to a moneychanger or to that new-fangled creation, a bank.

What Was Money Worth?

This question gets asked all the time. How much was a groschen worth? A shilling? There’s no consistent answer across time and space. You might just as well ask how many sheep it costs to buy a horse. It would depend on buyer and seller and the circumstances. Prices were generally pretty fluid in the Middle Ages.

Not that people didn’t try. Kings and dukes and such-like were forever issuing decrees that stated a royal franc must contain this many grains of gold and be of this weight, worth this many deniers. You can readily find tables giving ratios. In practice, it came down to what the moneychanger would give you, and that depended heavily on where you were (it was easier to bend the law in Auvergne, say, than in Paris) and even who you were.

All this comes down to a comforting conclusion for the author: you can pretty much make up whatever you please. Just don’t make the price of a horse the same as the price of a mug of ale. Unless it’s really special ale.

An author might consider making a bit of use of clipping. It was done all the time. No need to make a big deal of it, but if you have a band of ne’er-do-wells, someone in the group ought to be able to shave off a bit of profit. *ahem*  If you want to go further, counterfeiting is a possibility, though it was extremely risky and required equipment.

A good place for a robbery would be a mint. Better than a bank, really. The target would not so much be actual coins as grabbing the raw silver. Has anyone knocked over a mint in a fantasy novel?

Another opportunity lies in the variety of currency. Your hick hero has a few coins and is baffled to find no one in the big city will take them. He has to hunt up a moneychanger, and finds himself poorer than he realized. Or he’s taken advantage of, and a new character comes to his defense, forming a friendship.

And a final possibility. What about magical coins? Maybe your world has actual currency specific to magicians. Or a wizard uses magic to conjure up coins that look real, until he leaves town. What would be the safeguards against such fraud? Forget fireballs and demon conjuring. Just let me spin up coins whenever I want them!