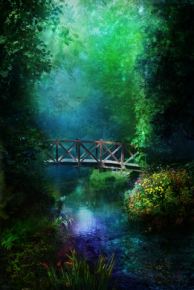 In two previous articles, I’ve talked about ways to help authors better understand their characters, as well as techniques for using fantasy to enhance the stories those characters are a part of.

With this article, I’m going to take a departure from the style and nature of those posts to try and put my words into context. I want to talk a little about how I’ve used this advice in one of my own fantasy projects as a Case Study to help other authors consider their own work.

Today I’m going to tell you about the story of a character named Breldin and the thought process I used to create a town called Trindall Grove.

In imitation of a thousand other fantasy stories, Breldin hails from a common life in a peaceful small town, where his angst leads him to volunteer for an expedition, in this case to explore the ancient, cursed ruins of a forgotten civilization. While there, he’s somehow afflicted with a curse that transforms him into a violent creature who must adapt to his new psyche while struggling to maintain his identity.

In order to Push Your Characters in this story, I want to create a strong contrast between Breldin’s character traits before the transformation and the violent tendencies which will form his personal conflicts throughout the story. I need to create a character that’s less plain than a farmer, more nerdy than a hunter, but lacking the security of an apprentice. And most importantly, to give this aspect of the conflict any depth, I need to create a back story and a home town which justify these traits so that his personality will have developed from the life that he’s lived.

Before deciding anything, I want to research agricultural techniques and medieval professions to develop a strong foundation for understanding his life. This will help me to identify the skills he possesses and the people who would exist in his life. It will also help me to imagine some of the emotional journey which leads him into the story and shapes his later actions.

Between the ancient Romans and the last few centuries, there were few developments in agricultural technology. Crop rotations helped to keep the soil healthy, irrigation techniques and infrastructure could take any shape to provide water, and the biggest jump in European farming techniques came through contact with the Native Americans, who taught Europeans to plant on a grid or to comingle certain crops. What catches my eye, however, is a more recent development: The Forest Garden.

Rather than harvesting a field or an orchard, an entire forest can be raised with layers of fruit-bearing trees, berry-yielding bushes, and vegetables instead of shrubs. Imagine walking through a forest pruned and managed like a dense orchard garden. The thought just feels magical, and yet, isn’t. To Control the Mood I can take this concept of a forest garden, support it by allowing that there is magic in the soil, and from there, create the town of Trindall Grove, a place of fruit-pickers, juicers, glass blowers and wood carvers. The magic is subtle, yet everywhere.

But I have to follow through. If the magic is in the soil, perhaps it would surface in some of the herbs and roots and fruits which it nourishes, even affecting, in turn, the wildlife which has evolved in the area. I now have a justification for littering the location with just slightly magical flora and fauna, as well as for incorporating herbal magic readily into the culture of Trindall Grove. People can add certain spices to their food, for instance, hoping that over time, the magic collected by those plants will help them to sharpen their minds, their reflexes, and their strength.

Of course, somebody would be studying this magic, which leads me back to Breldin: A young fruit picker, responsible for half an acre of forest garden, trying to learn herbal magic, and fascinated by everything he hears from the curate Ovre’Limeret, who studies all this magic at a place called Feyward Lodge.

Breldin’s primary conflict is personal, trying to do battle with the incredible monstrous hormones which an evil curse sends into his body. In order to fuel this conflict and Reinforce the Emotion behind it, I want to give him strong connections and strong relationships to the characters around him, like Ovre’Limeret, which will have influence throughout the story. I don’t want to take him far away from home or from the people he cares about – the people he may now hurt. I need to build the plot around that limitation.

But that creates a plot hole. If Breldin is cursed while exploring “ancient ruins,” which aren’t far from home, why has nobody else been cursed? And wouldn’t Breldin know there was danger? Thinking about a few possibilities, I decide that one possible solution will help to Activate the Plot and simultaneously subvert some possible clichés: Just go with it. Let the curse be triggered all the time.

Following the previous idea that magic was naturally in the soil, perhaps animals could be inflicted whenever they drink water from a wide lake, in the middle of which is an island with the ruins. People would try to wall off the lake, but as it happens, the region is subject to hurricanes which slosh the water outside the walls and infect too many animals to control. As a result, a large expanse of Breldin’s home country is considered too dangerous to enter without an armed retinue, and sometimes the danger spills into society as infected animals migrate over the fortified barriers set up to stop them. And because Breldin already knows about the curse, he can’t simply be infected. He has to be forced.

Which brings me to one last thought. Thinking about the region’s history, if the country is so dangerous, why would anyone settle there? I think the best answer is desperation. They are refugees, from a country which was the victim of war, who had nowhere else to go but to a dangerous piece of land swarming with magic both violent and subtle. This means they have fought these cursed animals in order to claim this mysterious land, and it means they could have brought with them the horses, pigs, wheat and other European elements which might not otherwise have fit into the environment. It also means they have an enemy who drove them from their homeland, a valuable plot tool which I can put to good use.

And for the most part, plot tools are what I’m looking for. Now there is enough to Delve into my character’s life, Expand forward, backward and sideways, and to Remember that personalities have themes. But that’s the real work which I’ll save for the novel.

Writing is an organic process, and Breldin’s story remains a long way from being complete. Every element I add will affect that story like a new piece of a system. They interact with each other to give my story a satisfying level of depth and complexity, leading to the paradox of good writing: Your story elements should build to a conclusion which is both surprising and inevitable.

When was the last time you added something to your story which eventually connected in a way that surprised you?

Taking us through your thought process was very instructive and interesting.  I particularly liked how you followed through with the idea of magical soil bearing magical food that people could ingest to obtain those qualities.

Most people think you can just write anything in a fantasy story and it will be fine. It’s not so. You really have to do research and keep in mind how and when your characters develop their characteristics. Thanks for the tips.

@SeanDavid Agreed. Just because it’s fantasy, doesn’t mean you can get away with just anything and expect the reader to accept it. I still need to know the facts in order to move forward and believe what is taking place.

Your comment about being able to justify the slightly magical flora and fauna from the magic in the soil is something I wish more fantasy writers would remember.  Too many just state something is so, without any justification, and this can jar you right out of the mindset you need to be in when you enjoy a good story.

Excellent article! The attention to detail and description of why and how is great. It has inspired me to stay on track and continue creating and writing.

I often wonder how fantasy writers keep up with all the details in their imaginations they dream up. I do so much better when I can rely upon my own experiences and memories. This way I don’t remember incorrectly or get my details mixed up.

As a new author that case study really gave me some insight into plot and character development, thanks!

Depends. What time is it?

I do this all the time. When I go back and edit, sometimes I’m shocked by the unintentional connections I find.

This is a fantastic post. It’s been a little while since I’ve sat down to write fantasy, but the attention to detail comes right back to me! There are so many ways fantasy writing can seem inauthentic, and glossing over a lot of the details you’ve mentioned here is just part of it. Welcome to the Livefyre community, and please feel free to let us know if you have any questions or feedback for us! We’d be happy to help.

@annedreshfield You bring up a great point, Anne.  In many ways fantasy writing is about creating and sustaining an illusion.  It’s the attention to detail that keeps the illusion real.  When the details are glossed over, the world ceases to be believable and the story can feel inauthentic.

On a different note, thus far Livefyre seems rather impressive.  I love the real-time interaction.  We also have an active vBulletin forum community on this site.  Is it possible to do a single sign-on, whereby forum members could comment using their existing vBulletin accounts?

@deldrago We do offer SSO, but at the moment we don’t support forum integration. It’s definitely on our product road map, though, and we’ll keep your name in mind when we’re rolling it out and let you know when it’s coming out!

@annedreshfield Thanks!  I would appreciate that.  If such a feature were added, thousands of sites with forums would likely switch to Livefyre.

I’ve had success with maps as a plot building tool. I always begin by mapping out my world, and use real geographical regions for inspiration. When writing the story I look at the map frequently, and ask myself what sort of creatures, persons or landmarks would live in any given area. That opens up tons of possibilities.

I was thinking about sharing the map of this world in a future Case Study on worldbuilding. A good map can be a great tool for putting together the chapter-by-chapter plot events and the details that help immerse your readers.

I was working on a story in which the protagonist is enslaved and forced to work in a mine. The question this raised was “what are they mining?”

This resulted in me creating a fictional substance of tremendous value, which had the side effect of changing a person’s appearance and behavior in dramatic ways. This opened up a whole new channel of possibilities, and made the story more compelling and original.