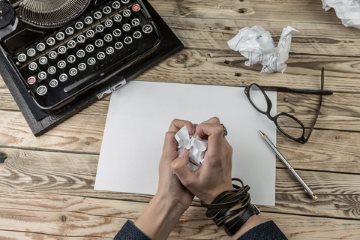 I don’t get writers block, but I do get something that’s just about as bad.

I can write, that’s not a problem. But sometimes I get tired. I get more than tired, I get weary. Writing becomes a burden. I write in a basement room and some days I can feel that burden descend on my shoulders as I descend the stairs. I know what I have to do, but I have no enthusiasm for doing it.

I only recently came to understand what was happening. I thought I was doing everything right. I had made writing a habit. I have a schedule of protected time. I prepare well and I’m told I tell good stories. So why the fatigue?

It’s because I had become too narrow. I thought I was concentrating, but there was a cost. Sure, I did other things, from gardening to walking the dogs to playing video games with my wife. Family events. Elder care. Well-rounded, looked at from the outside. What was missing, though, was things I liked to do. Small things, even silly things. And here’s the most important point.

I had stopped doing those things I liked, but about which I felt guilty if I did them instead of writing.

Things like playing music, or looking up song lyrics or the histories of bands. Things like following Internet trails. I have this list I started years ago called Dead in My Lifetime. It’s just a list of famous people of interest to me, who have died. It’s an interesting exercise, like looking back at the signposts along the road of my life. I have another list of books and movies that I think my (grown) kids ought to read or see. There’s no immediate writerly benefit to any of this, but I like to do it.

Since I realized this, I decided to set aside protected time to pursue these minor activities. I carve it out of my writing time. I gave myself permission not to write and believe me friends, it feels good. Once a week, I can do the writer version of simply mucking about in boats.

It can be anything that means something to you. I see plenty of recommendations for physical exercise, and I suppose that works, but don’t overlook the mental or spiritual side. Whatever it is, if you are feeling writer’s fatigue, consider setting aside some time to do it. For me, it’s one afternoon a week. It could just as well be an hour. It’s goofing time. Unproductive? Sure, if the only thing you believe in is word count. But I view it as a break. It’s a reward for being diligent on those other days. It is, really and truly, a form of nourishment.

Now, none of the above is particularly original. Search on writers fatigue and you’ll get plenty of hits. You will also notice that many have to do with physical fatigue (poor posture, carpal tunnel, etc.). And many can be lumped under the heading of “try doing something else for a while.” Here are a couple of those:

Rather fewer talk about other manifestations of fatigue, spiritual and mental. I like this one, both for its context and for its specific suggestions:

In doing the research, I came away with a better understanding that there are several different kinds of fatigue, several different ways we can become blocked. Being able to identify the problem is key, for the solutions are already out there.

1. Maybe there’s no difference between doing family activities and doing personal ones. What do you see as the benefits of each in dealing with writer’s fatigue?

2. What strategies do you use to keep up your enthusiasm and interest, not just for writing your current project, but also for writing in general?

3. Is there a fantasy aspect to writer’s fatigue? Is there something about the particular kind of writing we do that would create fatigue? Has it happened to you?

E.L. Skip Knox is a medieval historian who now writes alternate history fantasy about a place called Altearth. You can read more about that place at altearth.net.

He has published a short story, The Roadmaster and a novella, The Garden of Hugo Vuerloz, and is currently writing a novel, Goblins at the Gates. All are set in Altearth.

Thanks for the article! Really needed that right now, as well as the mental image of a badass marine in meditation before kicking ass (comment below).! for sometimes we are stuck in circumstances beyond our control. I for instance, am internally very unhappy with my life right now. All I want to do is go travelling around the world, seeing new sights and enjoying myself for a little while in an action that has dogged me my entire life. I convince myself that the reason that I don’t set out into the unknown is because I lack the money but honestly it is likely that travelling the world would actually end up cheaper than living in a freezing town on the coast of Russia where for most of the year the temperature is firmly in the negatives.
I haven’t figured out what it is that I am scared of – I am afraid to move but reluctant to stay and the longer that this drags on, the more strained my mind gets as it feels unhappy and the more my work suffers leading to the feedback loop that with suffering work it would be unwise to take on such a big decision which leads to greater unhappiness and so on and so forth. As you might have guessed by my ramblings, my mind is in disorder, it cannot come to a consensus of what it is that I should do. I am, quite literally, stuck between the rock (money) and the hard place (happiness).
I don’t expect advice, my problems are my own but I just needed a way to unwind while slowly realizing my own problems. Hope I didn’t bore you with this nonsense 🙂
Thank you for the post. I appreciated it greatly.

Oh, your article is food for my soul! I do have little things that I do when I’m getting kind of — well, sick of writing!! They vary quite a bit from playing computer games to walking outside. But they’re essential to me.

It’s good to know that I’m not alone. Like you said, it’s good to hear what other writers go through.

I think that taking time away from a strict schedule benefits a lot of writers. It’s not lazy, but taking time to mentally recharge yourself when you’re fatigued. It’s the same with an athlete, you just need that day once in a while.

Thanks for the great article! I appreciated the inclusion of mental and spiritual fatigue, which can be just as powerful as physical fatigue.
My favorite non-writing activity that helps me refuel is sewing…sewing and Pinterest. Sewing because it lets me create something physical right away. Being able to see and feel the fruits of my labor if you will. And depending on my mood, I can focus exclusively on sewing, or I can let my mind wander to my story and let different options play put.
I like Pinterest because there are so many lovely images and if it “speaks” to me, I can immediately have a writing idea. I don’t have to write it, but the very act encourages my imagination to play around. This ‘playing’ recharges me for whatever my current project is.
Thank you!

Good suggestions, both, Brandi. I’ve never connected with Pinterest, but browsing pictures is definitely one of my favorites (though I do pine for the old Google Maps with its myriad of pics). As for sewing, that’s no good. For me, sewing is a synonym for stabbing. 🙂

I agree with what you’ve said…and I’m grateful I have a wife that is very understanding, and helpful at times, about me needing some personal time to get back to being centered. She’s helped me by recommending meditation, and at first, I was hesitant…a Marine meditating? But, it does help, not only with the writing, but with other aspects too. And the kids are great also, they understand that I can give them plenty of time, but they are also at the age where they aren’t so needy. As for the physical aspect of it…sitting for a long time, carpal tunnel, etc…..my wife has me on a schedule (of sorts) that when I start on a new series, she has me use a timer and set for every hour and a half…..when the timer goes off, I need to get up and about for about 10-20 min. She’s a nurse and does not play around with health issues.

It’s great to have that support. It really makes a difference. And that’s a good tip about meditation, which has lots of benefits beyond those for the writer.

Thanks for the feedback, Scott.

Oh this is so relevant for me, but for different reasons. I have a deadline on finishing my novel series because of family issues going on, so if I step away from the writing I feel guilty that I’m not finishing ASAP. And yet if I push the writing, I feel guilty for ignoring the family issues that need to be taken care of ASAP. So, whether I write or not, I can’t get away from the guilt.

One thing that has helped, is to tell myself that time spent reading, watching TV, gaming, drawing, or doing whatever else I feel I have to do to take care of my sanity is like putting gas in the car. I MUST be permitted to refuel if I expect to get anywhere. So, doing creative activities other than writing refuels my inspiration for writing as well as my mental health for family issues. Down time is necessary for healing, and healing is necessary if we are to be strong enough to keep pushing forward.

Great analogy, Melody. Fuel for the car, or else nobody goes anywhere!

Thank you for the comment. I agree that stepping back is another way of dealing with fatigue. Sometimes, when I’m deep in the writing (or editing), I have trouble stepping away. I get guilty. So I’m tired *and* guilty!

One thing that’s been invaluable, and I ought to have mentioned it in the article, is hearing the experiences, like yours, from other writers. I think we are all hungry for feedback from our peers.

Hmm, I been there done that – the fatigue I mean. One thing that helps me, is to step back altogether. If you can afford to take a week or (maybe only a couple of days) off and do something entirely unrelated it really helps. Then you come back feeling refreshed and ready to go again. I like what you say about not being so restrictive,but you also need to practice some restraint or writing time would dwindle. Being your own boss is a tricky thing, but you’ve included some good food for thought here.