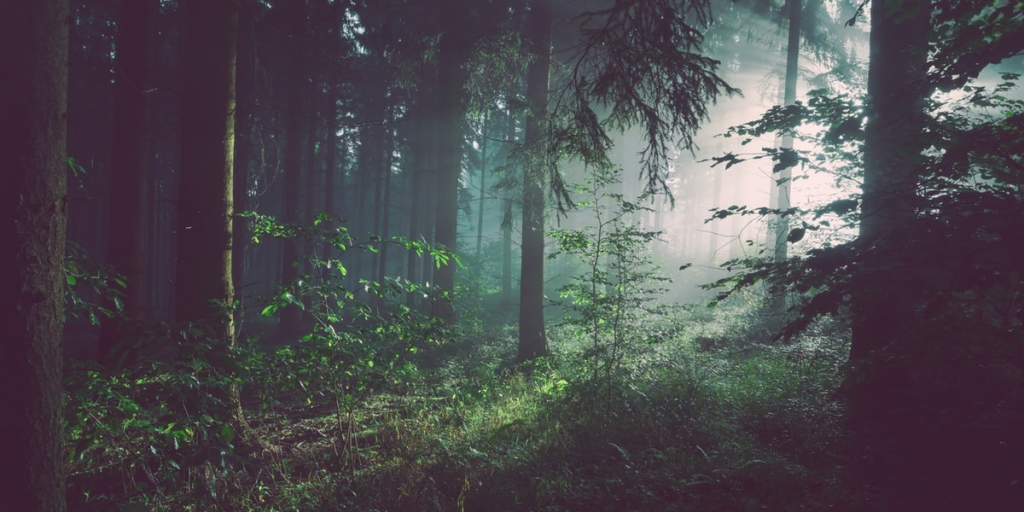 A baby's cry rang about the glistening trees. The sky was lit with dawn that broke through the canopy of leaves. In the heart of Gumber was a meadow that danced with blossoming flowers. The music of frogs, bugs, and birds came together as a chorus, chiming out their joy. It was a day of renewal, a day that would mark the first of a new age.

Ithil stepped along the meadow until she came to its center. Three pools sat in a triangle, each filled with pure water. On the bank of the central pool lay an infant, naked and hungry. Ithil scooped the newborn child into her arms and cradled it against her chest.

"There you are," she crooned while rocking the baby from side to side. "It's about time, too." She lifted her voice and called to the emptiness around her. Her words rang about the meadow. "What is her name?"

From the emptiness, the voice of the Sepheras came forth and wrapped around her as a gentle wind. She heard it echoing in her mind, a string of words in an elder tongue.

She shall be called Ashlyn. She shall defeat the darkness, lest the world be tainted with ash. Take her to the village. Let the elves celebrate her coming. When they have accepted her, let her live amongst her people.

Ithil gave a bow. "So it shall be." The child looked at her with a pair of golden-brown eyes. In the light they seemed to shimmer with a brassy lining. "Come, little one. The Sepheras has spoken."

With the baby in her arms, Ithil traveled out of the Heart and into the nearby village. She came to a place called the Ferion, where the Tribunal of the elves took residence. She faced the three elf lords: Kyanthus, Milanthius, and Kallus, who all sat brazenly against the backdrop of ancient stone and wood. The building dated back to the first age, where the first Sorceress ruled from a single seat; now it was vessel to the Lorish government.

"My lords." She bowed while presenting the baby to them. "The next child of the Sepheras has arrived. The cycle has begun anew!"

Kyanthus gestured her forward, an elf of one hundred and seventy-five years. Though considered old for his age, he was the sharpest and fiercest of the three Tribunal heads. He took the child from the Sorceress to examine its health. "Has the Sepheras named her?" he asked.

"Ashlyn, my lords," Ithil replied. "She is to be raised amongst mortals. I would have her grow up in the palace, under my watch."

Kyanthus gripped his bearded chin and said, "No." Then he stood, handing the child back to Ithil. "She will be safest here, kept from the political machinations of your precious humans."

"King Daniel is to pass any time now, and with the birth of a new Sorceress, I imagine your days are numbered too, Ithil. How long before the next generation exploits the child’s power? How long before she is a queen who cares nothing for the elves of this world?"

"I would not let that happen, Kyanthus. She will learn to care for all life, even after I am gone."

"Then let her learn here within the borders," he said. Straightening his pose, he turned to his fellow Tribunal heads. "What say you?"

"The judgment is sound," Milanthius replied. He was the middle of the three, in both age and height. His hair was a wavy blond, accenting his light-colored eyes. "It is fair to keep tradition by raising the Sorceress here in Gumber. But who will care for the child?" Milanthius turned to Kallus, the youngest but tallest of the three. "Kallus, you are a new father. Would you take on the task of another?”

Kallus' aquamarine eyes hardened. Ithil sensed his disdain toward her. Of all the leaders and important citizens she had encountered in her time, she had never been able to win Kallus over. His heart was cold toward her, a river forever frozen in winter.

"You insult me by asking me to watch over a Sorceress," Kallus said, his voice low but steady. "Let the child live with the humans, I care not to keep it here."

"Hmm." Kyanthus pondered for a long while. "Perhaps the child could be raised by an elf who has no heirs of his own. Hael, perhaps?"

Kallus averted his gaze saying, "Hael passed away last year. His body succumbed to the sickness despite all of Calda's skill. The poor widow is in grief."

"Calda?" Milanthius' face brightened at the idea. "If she is in grief you say, perhaps the child would suit her needs well. Let she who is childless have an heir."

Kallus let out a soft groan. "Both she and the baby would essentially be under our watch until it is grown," he said. "That is not a hassle we are prepared to deal with."

"All the more reason to take the child with me," Ithil said, cutting in. "The Crown will be her guardian, no matter who holds it."

"The Crown would only poison her against us!" Kyanthus' voice boomed against the frail stone walls, then he lifted his hand. "If we must involve a widow to ensure the new Sorceress is raised here, then so be it. I agree."

"I also agree," Milanthius said, raising his own hand. They both turned to Kallus, the one who stood against them. "Two-thirds vote, or unanimous?"

Kallus sat with his eyes staring at nothing.

Ithil knew he was torn, she could feel his conflict like little ripples floating about the air. The widow, Calda, was Kallus' friend. She had wanted a child despite her husband's chronic ailment. Kallus felt for her, understood the pain of losing a loved one to the sickness. He wanted her to have a child, but not in the form of a burden.

"I propose a compromise," Ithil said, stepping forward. "I would allow this widow to care for Ashlyn until she is of age. The child is still destined to become queen of Lorianthil no matter where she is brought up. The Crown will send for her when such a time arrives."

Kallus scoffed at Ithil. "Must your influence never end? The child is but a day old and you are already securing its future as a ruler? Let your human kingdom dissipate for all I care. Let the child choose her own destiny."

"I understand you still have conflict with me," Ithil said, "but if you stand against my kingdom, I cannot abide that. Ashlyn will need to take her place amongst them, there is no question or debate."

Kallus leaned back, folding his arms. "You have forgotten your own people, Ithil. If I were to wish anything of this new Sorceress, I would hope to see her become the defiance of you. I hope she does not abandon her loved ones and let them die of sickness.”

“I did not let anyone die of sickness.” Ithil glared at the Lor elf. “But I have long since learned it is fruitless to argue with you. If you want this child to be nothing like me, then you will raise her as your own.”

“No,” Kallus said firmly. “I will accept your compromise, but I will not raise the child.” Then he turned his sharp chin down and uttered, “I will ensure Calda does not suffer for this.”

“So we all agree?” Ithil asked, waiting for the consenting nods that followed. “Then I shall deliver her to the widow in question, and you will await the day my sister begins her training.”

Using the word sister was odd, yet it was true. As she turned and passed out of the building, Ithil sensed the voice of the Sepheras whispering again, and looked back with a glowing shimmer in her moon-like eye. "Fret not, Kallus. Ashlyn will restore hope and strength to your House."

On foot, Ithil made the fair trip to Calda's cottage in a rural part of the wood. It was a serene property, outfitted with a wooden deck and potted flowers. Ithil knocked on the door and when it opened, a young elf woman stepped out. Her blond hair was long and parted at the sides, her blue eyes sat like sapphires, glinting as the sunlight hit them.

"Yes?" Calda brushed her hair to the side, giving a bow. "What reason does the Queen of Lorianthil have to honor me with her presence?"

"It is honor I wish to bestow on you," Ithil said. "The lords and I have decided you are to be mother to young Ashlyn, here. They have given their blessing; it is fit for you to have an heir."

"Me? What have I done to receive their blessing? I am not prepared to raise a child!"

"I know you must be frightened." Ithil used the calm tones of her voice to steady the young woman. "I assure you, we would not ask this without great need. The Tribunal and I agree that if Ashlyn is to be a kind ruler, she will need to know and understand both of our worlds. Ashlyn would be surrounded by kindness with you as her caretaker.”

With a warm smile, Ithil handed the baby over to Calda and let her cradle it. The baby cooed again and gave off an innocent playfulness. Ashlyn liked being in the arms of Calda. They were two very different souls and yet the Fates could not have made a better pair.

Calda was bonding with the child already, her sapphire eyes brightened while brushing the infant’s tender forehead. Her finger was already wrapped in Ashlyn's tiny hand.

"The Crown of Tauros will send for her when she is of age," Ithil said. "Until then...watch over my little sister, will you?"

"Yes, of course," Calda said. "What an honor it is indeed, to raise a child of the Sepheras as my own. I can hardly believe it!"

Ithil smiled at the pure joy taking place in front of her. It would be a hard task to say goodbye indeed.

"You and Ashlyn shall be well looked after,” Ithil promised. “Do not fear the day she is summoned to Tauros; it is my hope that we will all rejoice once the crown is on her head." With that, she kissed Calda's forehead and met the baby's eyes one last time. "Goodbye, little one. I shall see you in the next life."

Then Ithil turned and departed. The twilight cast over the trees until her figure faded amongst them.


***​
Calda closed her door and sat down, cradling the baby against her chest. She did not expect the child to feel so warm against her, so...human. But it hardly mattered that the child was human, it still brought her a wave of contentment. She knew the Fates had crafted this encounter, so right and fitting for such a time as this.

Calda had only dreamed of bearing a child of her own. Not so long ago, she had resigned herself to a lonely widow’s life. She had no intent to remarry, and therefore had no plausible prospects for a child. But now, with little Ashlyn in her arms, Calda's future did not seem so bleak.

The baby kept stirring, reaching for the curve of Calda's gentle face.