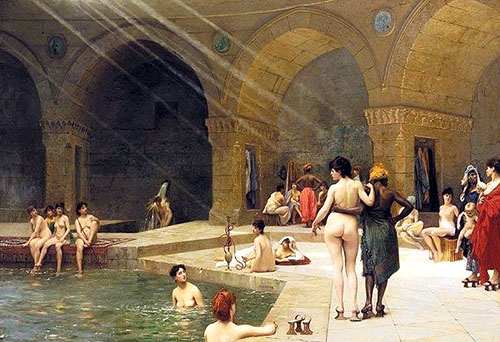 This is another installment in my series, History for Fantasy Authors.

There were scores of trades and crafts that organized into guilds. This is an essay about one of them, a guild that existed in Augsburg, Germany in the late Middle Ages. It’s not typical, and that’s part of why I think it’s worth examining. I hope it will give you some ideas for new settings and new ideas about guilds in your own writing.

Bathhouses had little to do with getting clean. A bath was more like a spa, a place in which to get healthy or to maintain health. It was also like a spa in that it was a place to hang out, to relax and have some casual fun.

Bathhouses were a place for conversation. Business was transacted here, for most patrons of wealth and power came to the baths at least occasionally. It was the perfect place for making business deals and also for making social contacts so important to medieval town life. That father of the girl your son is so crazy about? You’ve probably met him at the baths.

The bath house was also a prime place for gambling, prostitution, and just plain fooling around. It is no coincidence that the public bathhouse began a long decline in the 16th century, as a result of the attempts to regulate public morality during the Reformation.

Bathhouses, too, were an important place where some basic health regimens were practiced. The quality of the water was of paramount importance and a matter of civic pride, especially where the town was lucky enough to have hot springs. The more the water stank, the better it must be! Massages were common, just part of the general atmosphere of relaxation. As you can see from the pictures, music and food were also part of the regimen.

Of more specifically medicinal benefit was the practice of bleeding. In some cases, a cut was made and a cup was filled, then the wound was closed. Also common was use of leeches. The benefits of bleeding were so widely accepted, both popularly and by doctors, that one could go nearly anywhere in Europe and find a practitioner. 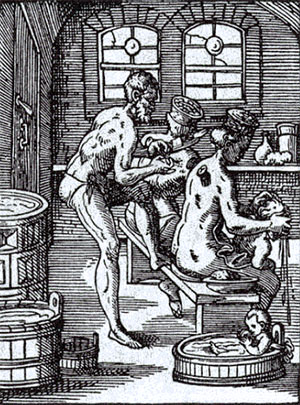 Medieval baths were inherited from the Romans (indeed, a number of them were of Roman make). They had three sections with three baths (think swimming pool, not bathtub): one hot, one tepid, one cool. A full course would entail time spent in each, but it was also possible simply to come in and hang out in one. A great deal of weight was given to regulation of one’s body temperature for general health.

A bathhouse had an entire staff, consisting of journeymen who handled the massages and bleeding, and hired servants who did things like brought in food or played music or cleaned up. With such a large staff, you can see that a master bathhouse keeper was more of a small businessman than a craftsman.

Journeymen in a bathhouse were in different levels, trained and untrained. The untrained could cut hair and give massages, but could not do any surgical procedures such as cauterizing a wound. There was no requirement for a masterpiece with a Bathhouse Keeper, but he was required to take a test that included the preparation of plasters and unguents. He was also required to be able to explain the guild regulations. 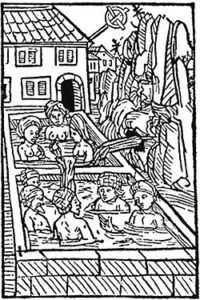 By the way, bathing the way we moderns think of it, with soap and for the purposes of cleaning away dirt, was not at all the function of a bath house. Any decent person regularly washed face and hands, pretty regularly washed their feet. The rest of the body … eh. Once a year was good. But at the bath house you might be scraped and oiled, which had much the same result.

A bathhouse would be a great place to set a scene. It could be for a meeting, either open or clandestine. You could use one of the staff to pass a secret message. Especially after hours, it could be for some dark deed (the doors were normally locked, but locks can be picked or bribes can pry them open). The bathhouse could also be a place where someone wounded could slink in through a back door in a way that would be difficult at the shop of a barber-surgeon. 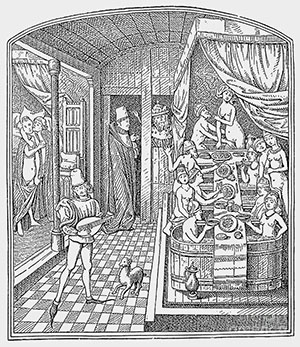 With that in mind, rather than have your character go to a doctor (who in the Middle Ages mainly just dispensed medicines) or to a surgeon, why not have them slip into the bathhouse? There they could be hidden treated for any number of ills, including magical ones. For that matter, what would be the magical aspects of a bathhouse?

Given how socially important a bathhouse was, a bathhouse keeper would be a great secondary figure in a story that takes place mainly in one town.

It also would be a great place to find a body.

How about you? Does this stir up any ideas? Care to share?

A number of books on daily life in the Middle Ages will have a section on bathing. You will find more detailed information, though, if you look at the early modern period.

Bathhouses are still quite popular in Japan, though the etiquette does require being clean before soaking.

Hualketh does have something called Mile Houses. Hualketh is large and mountainous, so getting around has often been difficult, dangerous, and time-consuming, even today with the help of railways, stagecoaches, steamboats and airships. In the old days, towns were often more than a day's travel apart. During the Protectorate Era, the imperial government established a series of inns located at the halfway mark (or third, or quarter way mark, depending on the distance) between towns to shelter travelers and soldiers. Often, a few farms and workshops set up nearby to help support the inn, and eventually grew into a settlement in its own right. Hence, there are a number of villages in Hualketh with names like Twenty-Three Mile House, Fifty-Four Mile House, etc. This didn't always happen though. Either way, the original Mile Houses remain in operation, and they all have a bathhouse attached or close by.

Castles also had (and have) a bathhouse as part of the complex.

Have you given any thought to rural bathhouses? They might be isolated, but they might also be attached to an inn. Or maybe a military post?

Bathhouses are something of an institution in my primary setting of Hualketh. However, Hualkai bathhouses owe more to the Japanese and Finnish sauna rather than Roman and Western European traditions.

Although bathhouses do have an unseemly reputation (get lots of naked people together in one place and there’s bound to be trouble, and don’t even get me started on stolen bath salts), there thankfully hasn’t been the kind of moral backlash that shut down the tradition of social (and otherwise) bathing in our Western world. The bathhouse tradition has been further encouraged by an abundance of hotsprings and wood for fuel (Hualketh’s geography is largely inspired by the Pacific North-West). If anything kills the bathhouse, it will be the rise of indoor plumbing, but this is a recent invention, and is neither cheap nor widespread. For now at least, the bathhouse remains king.

While the bathhouse is not THE place to meet and socialise, it is certainly one of the preferred venues. A bathhouse visit is often a component of courtship, since it provides the would-be partners a socially-acceptable opportunity to see what each other looks like under their clothes, without getting too involved. The Hualkai are also fond of tattoos, and these are something of a status symbol. The bathhouse is one of the few places where they can be freely shown off. Some bathhouses are sex-segregated, others are mixed gender, and others offer a choice of either.

Even the smallest village has a bathhouse, and in cities one is usually within walking distance of one at any given time. Bathhouses provide a range of services. For a nominal fee (usually the lowest denomination of currency) you’ll get a rag, a bar of soap, a bucket of warm water, and directions to a big room full of fellow bathers and stools (hopefully one of which is vacant). If you pay more, you get access to pools, saunas, private rooms, fancy toiletries, refreshments, etc.

Given their cultural importance, it is likely that bathhouses will figure in one or more of my stories.

Hey, guess what, you get me again. I actually use the bath house setting several times. Sometimes following the tropes that come with them more in anime. Though one of them actually starts out as a spa day and actually get’s a love story going on it. It was fairly romantic and relatively private (the joys of being able to get a private room and sauna).

As a whole they are fairly common around Eld and given that with magic you can have regular water heated and pulled up with a bit of effort they stick around. Some of the richer sorts even have a wing of the house or manor with one and any of the schools (Zukal Magical Academy in particular) also have an entire ground floor wing dedicated to it. And there are even bath houses in the Rose Districts (Red Lights) for more entertaining sorts of bathing.